As mentioned already in the introduction to our tour of Bretagne/Brittany, the town of Auray came in at the top of the list of the ten most beautiful towns in the region. The Municipal Council of the town uses the above logo to illustrate one of the reasons why their town is so picturesque; it consists of two villages, one covers the slopes of a hill and leads down to the river where its sister village of St Goustan straddles the waterway. Add a long and interesting history, beautiful architecture, great scenery and lots of cafes selling crepes, you have the perfect recipe for a must-visit town.

We were staying in a motorhome in nearby Carnac and

so we drove for half an hour to reach the outskirts of Auray. Our intention was to get close enough to the old centre of town in our van, park and then ride the rest of the way on our bikes. We were still getting used to this touring process and because we didn’t have a map or think to google “Campervan Parking Areas’ in Auray, we parked a bit further out then necessary so our bike ride along the hilly road to the centre of town was more arduous than it needed to be. We got better at this process as the trip went on.

We found a small park and bike racks near the Church of St Gildas at the top of the town and realised it was all down hill from here to Port St Goustan. We decided to park our bikes and have a look at this austere looking early 17th century church. From here it was a fabulous stroll down Rue du Lait, admiring the stone or wooden fronted buildings along the way until we arrived at Place de La Republic. We felt we had earned our morning coffee and pastry so stopped and enjoyed watching the hustle and bustle of this busy town. 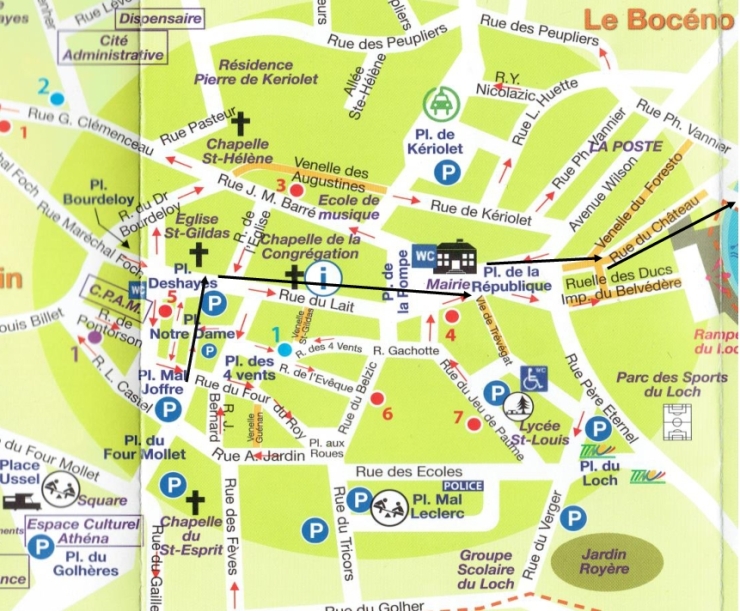 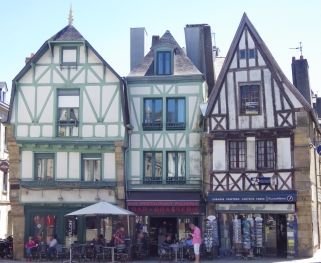 Every village in France seems to have a Marie or some

council administrative centre. Some are small and don’t stand out but in so many other places they are significant buildings. The Town Hall that stood in the centre of Auray was a white dignified 18th century building that spoke of authority and common sense. If you were in doubt as to its status, it had the regulation French motto between the front doors’ ‘Liberte, Egalite, Fraternite’. From this point on, the street curved evn more steeply down hill and it was definitely not for bikes or tourists in wheelchairs. The name of the street was Rue de Chateau but although there was some lovely buildings along this street with blooming roses out the front, there was no sign of a chateau or castle to be seen either on this street or down the bottom along the quay that spread out before us when we reached the bottom of the hill. More on the missing castle later.

The walk down Rue de Chateau gives you no glimpse of the panorama awaiting you once you reach the end of this street. A quick turn right and the town’s ancient bridge stands before you and to its left, gorgeous stone houses and gardens stretch along the river bank. The four arched stone bridge has apparently had a difficult life  since its construction back in the 13th century. Looking at the map of the whole area (See appendix 1), you can see that Riviere d’Auray is a tidal river that grows ever wider on its twisted journey down to the Gulf of Morbihan before its waters eventually connect with the Atlantic Ocean.

Over the last 900 years, there have been many changes to the course of the river and its banks and at times the old bridge has deteriorated under the pressure, forcing citizens to occasionally have to carry their good across the mud flats. After a rebuild in 1464, it became known as Pont Neuf (New Bridge)! On one of the explanatory signs near the bridge, the following commentary is posted.

“If the bridge is today the town logo, it may be so due to the fact that it symbolizes the contrasting identity of the Alreens (ie: Auray’s inhabitants). The bridge connects and separates, it is a link and a border. We sit, chat, argue over and sometimes fight on this bridge.”

There wasn’t any arguing or fighting the day we crossed La Riviere D’Auray but there were a lot of visitors admiring the view from the bridge and crossing over to Place St Saveur which was flanked on two sides by colourful wooden medieval houses. This spot was once open to sea-going ships that were able to make it all the way up to St Goustan. Perhaps the most famous visitor was one of the Founding Fathers of the USA, Benjamin Franklin who in 1776 sailed across the Atlantic, hunted by British ships determined to stop him keeping his appointment with the French court. Whilst he didn’t spend much time in Auray, his trip was significant in world history terms as he was able to gain support from France by obtaining  finance and armaments to assist in the young country’s fight for independence from the British. The dock that stretches for some way along the river from the bridge is called Le Quai Franklin. The tourist sign next to the bridge explains…

Even a bar on Place St Saveur is call Bar Franklin!

There is also another historical association with the ‘New World’ that the Auray local council likes to advertise. The explanation below the map 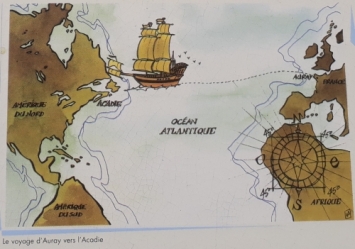 here reads in rough translation… “Auray and the Acadie. In 1622, Richelieu encouraged the settlement of the Acadie (North America). He made available to Isaac de Razilly, governor, four ships holding 300 elite men from Touraine, Poitou and Brittany. They left Auray on 4 July 1632 in the direction of the port of La Heve” (in Nova Scotia). We learnt on our visits to other ports along the west coast of France, that Cardinal Richelieu, the clerical adviser to Louis XIII, had a huge impact on France in the 17th century. One of his pet projects was the promotion of ‘New France’, France’s colonization of North America, following in the footsteps of the St Malo explorer, Jacque Cartier.

From Place St Saveur we walked up Rue St Rene,

admiring the medieval houses on the way up to Eglise de Saint-Goustan, named after the patron Saint of Seafarers. As mentioned earlier, there were many holiday makers around St Goustan, particularly when we walked down hill to the port again and discovered a large crowded market with the locals enjoying oysters and listening to a band pumping out French classics. It was the Friday of a four-day long weekend in France so there were plenty of townsfolk out and about enjoying the sunshine and their holiday. Le Quai Franklin was crowded with yachts as there was also a racing regatta occurring down river in the Gulf of Morbihan. Finding a spare table in the restaurants was difficult but we eventually found a table and dined on one of the local specialties, crepes, available in a wide variety of sweet or savoury.

restaurant near Le Quai Franklin provided us with a view was across the river and back up the slopes of Auray. The opposite bank had been landscaped around old stone walls and a ramp that led up to the top of remnants of old fortifications. We had finally found what was left of the missing castle referred to in the steep street, Rue de Chateau, that led us down to the port.

The ford over the Auray River has clearly been a strategic crossing point for traders and hostile neighbours for thousands of years. Local historians have done a lot of work on the history of Auray’s missing castle. They tell us that in the 11th century there was a fortified, mound fort (castrale) here and this was replaced in the next century by a large castle, where the local dukes resided. All along the west coast of France, from Bordeaux to Mont St Michel, we came across the stories of the impact of the 100 years war waged by the French Court against the demands of English nobility claiming their birthright over Normandy

and Aquitaine, their inheritance apparently from the Norman invader of England, William the Conqueror. This vicious debate played out around Auray in the 14th century when the Auray castle was taken by one side and then the other in the so-called War of Succession in Britany. After the damage done in the 1364 Battle of Auray, the castle fell into decline and by the 16th century, only ruins remained. Like so many fortifications that had lost their usefulness in France, the stones were sold off and reused in other buildings in Auray and other towns. Today, Auray’s castle is a memory of the past, kept alive in a street name and a wall that still stands overlooking the ford of a river that it once dominated. The image on the right above, developed by local historians, is a recreation of what the castle would have looked like in its heyday.

The only problem of Auray being built on the slope of a hill is that visitors like us had to complete the slow walk back up to the top in order to collect our bikes. By the time we returned to our camping ground at Carnac, we had forgotten our sore knees and were able to remember clearly a great day in beautiful Auray and St Goustan.

APPENDIX 1: Where is Auray in Bretagne?

The ugliness of the Battle for Auray is captured in the above painting by Loyset Liedet, an early Dutch  miniaturist and illuminator. It gives you a close-up insight (without the blood!)  into the consequences of the fighting over power, influence and land between the English and French nobility of the 14th century.