A City Battered by History

Avignon is a beautiful city to visit today but you only have to scratch the surface of its history and geography to get the idea that its situation on the Rhone River directly inland from Marseilles has been the key to its wealth and its trauma. This area of France has been inhabited by humanity for many thousands of years; there have been artifacts found here that can be dated

back to the Neolithic period, around 5000 years ago. The curve in the Rhone river across from the river island of Barthelasse was a great spot for a settlement. One side of the place was protected by water from attacks by envious neighbours for thousands of years before the famous bridge across the Rhone was put in. The other reason for choosing this site was that, being on a river, it was a key trading point between the Mediterranean Coast and the rest of France. My favourite story of the tightrope that Avignon strode due to the Rhone River was that in the fourteenth century it was the border between Phillip IV’s (The ‘Iron King’, ‘Philip the ‘Fair’!) French Kingdom and the Holy Roman Empire. However when the river was in flood, the water lapped at the walls of Avignon and so Philip the Fair taxed the citizens of Avignon as the city became part of France during the flood.

The first mention of ‘Avignon’ was back in the sixth century BCE when it would have become an outpost of the Greek Settlement at Marseilles. Like all the towns that dotted the Mediterranean coast, the rise in power of the Romans and their movement into France changed the landscape and Avignon would become a Roman settlement. It is believed that the forum of Roman Avignon lies beneath the current square near the Palais de la Papes, Place de L’Horloge’. This Roman takeover would have been completed by the conquering of Marseilles (Massalia) by Julius Caesar’s army in 49 BCE. The inevitable downfall of the Roman Empire would have signalled the arrival in the 4/5th centuries CE of organised Christianity.

For the sake of brevity and to prove my thesis contained in the title of this article, I present here a table of torturous events that marked the 800 years of Avignon history before the Popes arrived to make it their home in 1307.

A visit to Avignon today cannot help but take you back to the strange world of Europe in the 14th century and what happened to Avignon when it became caught up in the middle (literally) of the dangerous world events of the time. The city is dominated today by the Palais des Papes which sits astride the Rhone River, a time traveller from the 14th century when it was built by two Popes who had decided, perhaps for mainly political reasons, that Rome was too dangerous a place to pontificate in. It consists of two palaces; the ‘old’ palace built by John XXII (1316–1334) and the New Palace built by John’s successor, Clement VI (1342–1352), who decided he needed a more expansive building to support his Papal ambitions. It is currently the oldest, largest Gothic structure in Europe, originally serving as both palace and fortress in its heyday.

Visitors to the Palais des Papes will be slightly disappointed, but not surprised that the original furnishings of the Palace are long gone due to the ravages of time such as woodworm and theft. It is a beautiful old place and it tells the story of why seven popes (and two ‘anti-popes’!) lived here for almost the entire 14th century. 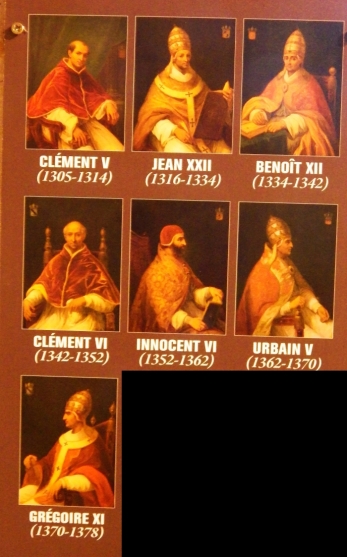 The map above attempts to provide the shorthand explanation of why Avignon became the centre of the cyclone of European history. Whilst there is no doubt Rome was a dangerous place at the time, the Popes ended up in Avignon due to the conflict between the King of France, Philip IV (1285-1314) and Pope Boniface VIII (1294-1303) as to who was the supreme ruler of France. Philip at one stage sent a small army into Italy to capture this Pope! In the end, Philip won the arguments by ensuring there were more French Cardinals who owed allegiance to him and so Pope Clement V (1305-14) moved the Roman Curia to Avignon and it didn’t return to Rome until 1376. Avignon remained the key centre of Europe with pressure from all sides. In 1355, the famous Black prince, the heir to Edward III of England, made it to Narbonne on the Mediterranean coast of France on his pillaging campaign across southern France, 113 miles from Avignon. Pope Clement VI was very worried.

The 14th century was a complex time in Europe including the Crusades as well as the destruction of the infamous Knights Templars. This chaotic history is in the air as you tour the Palace of those Popes who perhaps had the feeling they were in the wrong place at the wrong time. The image of the seven Avignon Popes above is one of the posters from inside the Palais des Papes.

If a survey was taken around the world about what people know about Avignon, most would not mention the Palais des Papes but the silly song about all the people dancing on the bridge that used to cross the Rhone River and meet the shoreline not far from the Palace. Rhone floods were not just a problem to tax-payers inside Avignon, it played hell with the bridges. Of course the first wooden bridge was destroyed by a vindictive French army during the Albigensian Crusade (1209-29) but from then on, the Avignon bridges didn’t survive regular floods, even though they were built from stone. Repairs were abandoned on the Bridge of Avignon in the mid 1600s but its remaining four spans have been protected ever since; it is now World Heritage listed. Perhaps it has been preserved due to the number of people who like to dance on it… Gentlemen, Gardeners, Dressmakers, Winegrowers, Laundresses, officers, babies, musicians, abbots and kids.

In the background of the photo above of the Bridge of Avignon can be seen the bell tower of the Cathedral of Avignon with its gold-plated statue of Our Lady on top, added in 1859. The original Romanesque church was built in the second half of the 12th century, built before the crusade that attempted to root out the Cathar Heretics from the city and before the Popes arrived to build their huge palace. It lasted intact until the French Revolution of 1789 and it was left to deteriorate for the next 30 years until it was reconsecrated and rebuilt by 1840. The drawing below comes from the early 1600s (Etienne Martellange) and shows the Palais des Papes in the centre and the Cathedral is top left with its bell tower in place but no golden statue.

Visitors to Avignon should set aside a couple of days to see the sights of this beautiful medieval city, particularly if you have an interest in the history of fortifications; Avignon’s walls are still there and are huge and worth a late afternoon stroll and inspection. The next time I visit there I will be hiring a bike, crossing the river to Bathelasse Island and going for a leisurely ride along the shores of the largest river island in Europe. Late afternoon evenings should be spent walking the alleyways of Avignon, both before and after the great dinner you are bound to find somewhere in the old centre of town.

Of course, Avignon is a great place to spend time but it is also a great base for a holiday where you intend to visit some of the fantastic places that are well within a two hour drive of this city. Some suggested destinations would be…