Crossing over the English Channel from Calais to Dover is not a passage that is relaxing and definitely posed us some challenges. I must admit to being a bit nervous at the last check point when the custom guys got on and checked everywhere in the motor home for smuggled immigrants. Suffice to say, we were returning with a hired motor home from Northern France and we had to deliver it the next day to a place on the north side of London. We had left reasonably early and decided we would overnight somewhere in Kent before taking the van back for a late morning return the next day. When given the opportunity, where else would we spend the afternoon and evening but in Canterbury.

I knew enough about Canterbury to know that it would be a very interesting place. I had studied the Nun’s Priest Tale from William Chaucer’s famous work Canterbury tales (English 1 at Uni). I therefore knew that it had been a pilgrimage site for folk wanting blessings from the tomb of the murdered St Thomas Becket. I knew the story of how he was murdered in Canterbury Cathedral (‘Murder in the Cathedral’, TS Eliot, year 2 of Arts Degree). I also knew that Canterbury Cathedral was the home for the world-wide Anglican Church and so was very famous. What more did I need to know apart from the fact that an afternoon and evening was insufficient to do justice to this lovely walled town. It was also raining. This blog covers what we saw during our strolling of the centre of the city and I saw enough to know I would go back there in a flash.

From the Bus Station to the Old Butter Market 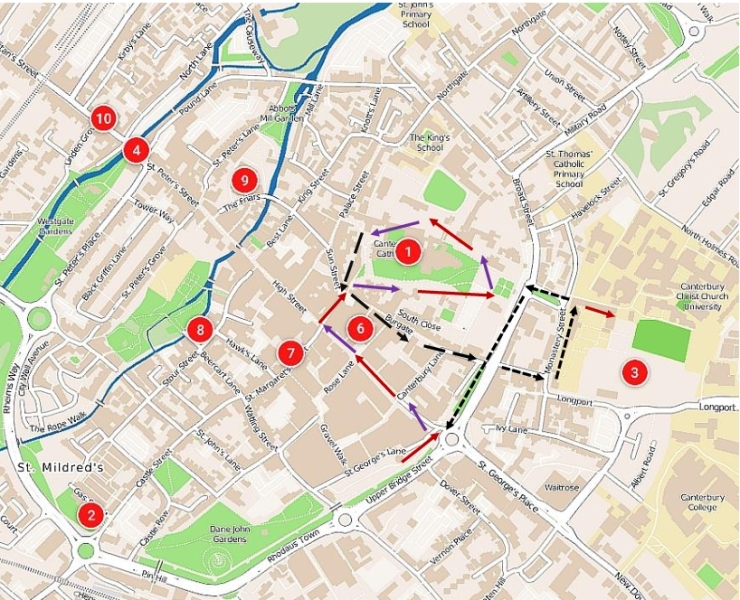 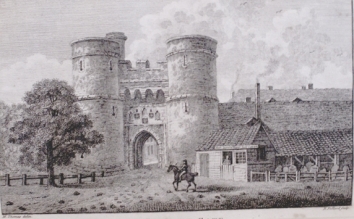 It was raining when we got off the bus, but the bus station was right next to ‘St George’s Gate’, right outside the line of the old walls that used to protect Canterbury from invasions. Much of this wall is still preserved today but unfortunately St George’s Gate itself is not one of the parts of the wall that has survived. It was demolished in 1801 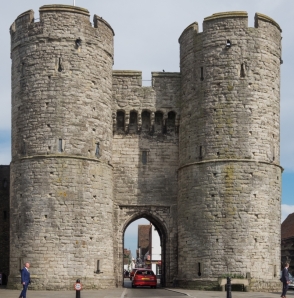 like so many other European city-wall gates when narrow entrances and their large bulk interfered with the increasing commercial business of cities.

We found ourselves on High Street that bisects the old city of Canterbury, leading directly to Westgate on the other side of town, the only surviving gate in Canterbury’s walls. High Street is a modern shopping Street and we weren’t interrupted in our window-shopping until we reached a tall, dark stone tower. Initially I thought it 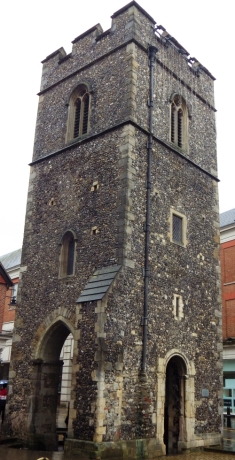 was a bell tower, looking for its missing church and surprisingly I was right. Its original church was destroyed  when bombs were dropped on Canterbury as part of the so-called Baedeker Raids during the war and the Church of St George the Martyr was badly damaged. These raids were named after Tourist Guides used by Germans visiting Britain before the war. Presumably wealthy Germans used these guides in the 1930s to assist them in enjoying a visit to Canterbury; in World War 2, the Luftwaffe consulted this Tourist Guide to decide which city to bomb and so cause the most damage to English morale. The damaged church was demolished in the 1950s but the clock tower was saved as a landmark commemorating the events of 1942.

One of the main Squares in the old town is the 800 year old Buttermarket Square. When we arrived, it was raining but the square was packed and there was little to see of the cobblestones, screened by the sea of umbrellas that had appeared. The main interruption to this view was what looked a medieval stone monument that appeared to be crumbling away in the centre of the square. It was a World War 1 memorial with statues around the upper section of soldiers, airmen etc. It was a monument that was only a 100 years old that looked like 500 years old. I discovered later that this was because the stone used was a disastrous choice because it disintegrated quickly and looked terrible after many years of weathering.

The other major feature of the Buttermarket is the Christchurch Gate that is the principal entrance to the cathedral precinct. It is a gate that introduces into the Canterbury story that famous English King who is the favourite of English historical dramas made for TV. (Wolf Hall being amongst the most recent.) This time, it is his older brother Arthur who is the main centre of attention of this magnificent gate, built between 1504-21. It seems to have been built to honour Arthur as the the future King and his 1501 bride Katherine of Aragon. However poor Arthur died at the age of 16 and did not get to admire his gate in Canterbury or admire for too long his bride who his younger brother snapped up and married in 1509. Katherine became Queen of England but her eventual putting-aside by Henry VIII became the cause of the biggest divide in European religious history. There are two carved heads inside the gate that are believed to be Arthur and Katherine.

The gate, like the Cathedral itself, suffered damage at the hands of the Puritans in 1643 when the original statue of Christ was destroyed. After 347 years, the statue of Christ was replaced in 1990. Directly under the statue of Christ is the heraldic Shield of Henry VII (Arthur’s father) and the one on its right is Henry VII’s Tudor rose badge. The rest of the shields tell the story of nobility competing for power in the dangerous English political climate.

From the Buttermarket we walked through the Christchurch Gate to the ticket office and from then headed into the precinct that surrounds Canterbury Cathedral. We strolled over the Archbishop’s palace to the left of the cathedral to have a look. The image below shows what a delightful building the resident archbishop gets to live in; even the ruins of ancient walls are gorgeous. From here we walked back towards the entrance of the cathedral and noticed that the current Queen of England and her husband got their statues in place on the front wall of the cathedral. 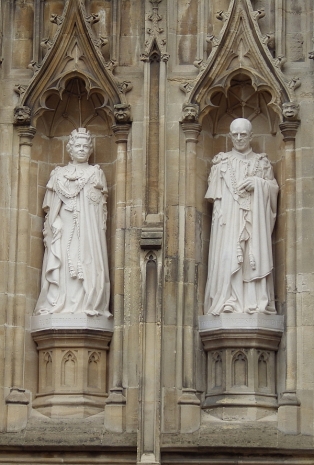 The other issue we noted at this point was that we had come to view Canterbury Cathedral at an unsightly stage of its history. There were large amounts of scaffolding over the side of the cathedral indicating that significant restoration work was in progress.

Wandering through Canterbury Cathedral is a surreal feeling, not just because of the great beauty that is all around the visitor. There is an overwhelming sense that this spot has been a centre of English history for at least 1400 years from when St Augustine was sent to Britain by Pope Gregory the Great. He settled down in the old Roman town and built a church and a monastery here that remains the centre of the English Church today.

The Cathedral’s long history that includes its burning down, destruction by invaders and continuous rebuilding is too broad a topic for this blog so I will just touch upon only one issue of interest to me about this cathedral…three famous tombs of figures from English history that have fascinated me over my lifetime. One of these characters in fact no longer has a tomb here, only a memorial shrine. Thomas Beckett was buried here for three centuries before his tomb was destroyed and his body disappeared.

Thomas Becket was buried in his first grave in Canterbury Cathedral in 1197. Fifty years later the Trinity Chapel at the front of the cathedral was built and Becket’s remain were moved to a shrine in this new chapel. With the coming of Henry VIII’s need for a divorce from Katherine and his split from Rome, the monasteries of England became his target for gaining the necessary wealth to run his kingdom and fight with France. In 1538, Henry summoned the dead saint to court to face long held-over treason charges and unsurprisingly, Beckett refused to show up. Henry found him guilty and confiscated all the treasures of his shrine. Things tend to get strange when you have to summon your dead enemies to treason trials. 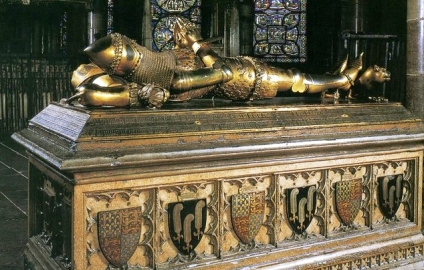 The next famous person from medieval history is the eldest son of Edward III, named in his lifetime as Edward of Woodstock and to history as the Black Prince (1330-1376). He was heir to the throne of England but he was to die before his father. However he is remembered as one of the great leaders of the

English armies in the 14th century, in the 100 year long war with French Kings as to who owned the lands of Normandy, Aquitaine and lands east of these territories. In our traipse across France in a motorhome in the previous month, we encountered the Black Prince’s history in places like Carcassonne in southern France. He may have earned the descriptor ‘Black’ from his military techniques; he failed to break into the huge Carcassonne fortress so instead he burnt the walled town which was just across the river. By the English, he was considered a model of chivalry.

He left details for his funeral and his cask and apparently these were carefully followed out. Who knows who wrote his epitaph but it is poignantly written. Perhaps he had forewarning that his family histories (eg. His father Edward III and his son Richard II) would be written up in verse by William Shakespeare.

The other famous tomb in Canterbury Cathedral is 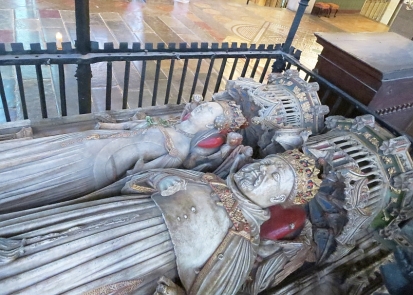 that of Henry IV and his wife, Joan of Navarre. I had to study Shakespeare’s history plays many years ago and my favourites were ‘Henry IV, Part 1 & 2’. The two plays are not so much about the King Henry IV, but about the shenanigans his eldest son gets up to, spending most of his late youth carousing with the buffoon, Sir John Falstaff. His father dies (thus his presence in Canterbury Cathedral!) and Hal transforms into the warrior King, Henry V. Great story and its very interesting to inspect the life size tomb chest where Henry IV and Joan of Navarre lie in state. For an unknown reason, Henry was exhumed in in 1832 and they discovered he must have been embalmed as the old king was still in reasonable shape, 420 years after his death. They also established that the effigy on his tomb is a pretty good likeness.