The above tree covered stream and bike path could be accessed from the back of our Camp-Ground and would lead us along between the La Cite fortress and the river Aude. It gave us the option of turning right up the hill to the citadel or left over the Point Vieux bridge into the ‘new’ city; Bastide St-Louis was built from 1260 by the Cathar citizens expelled from their homes in the old fortress. The diagram below illustrates the layout of the area back in the middle ages showing how the old hill fortress was connected to the new town over the river Aude. The bridge was built from around 1315 replacing an old Roman bridge up stream.

‘Bastides’ were purpose-built towns in the 13/14th centuries in southern France to replace towns destroyed by the wars against the Cathars or new towns needed as determined by the local rulers. They were built around a central market square in grid fashion. They were considered easy to 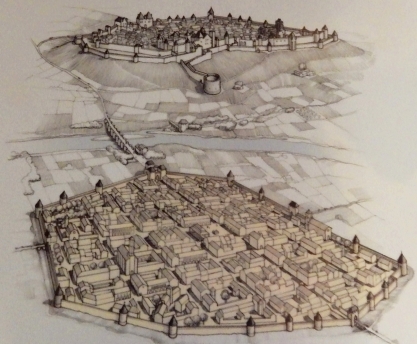 defend but were not necessarily fortified to begin with; in the case of Bastide St-Louis, they saw the writing on the (metaphorical) wall and built their fortified walls after Edward the Black Prince’s rampage through Southern France on behalf of his Father, the English Plantagenet, Edward III. In frustration over his inability to break into the Carcassonne fortress, he burnt down the new town only a century after the fleeing Cathar citizens had escaped to ‘safety’ across the river. After the Black Prince had departed, the citizens of Bastide St-Louis built some decent walls. Fortified Bastide towns proved very effective in defending their citizens throughout the Hundred Years war (1337-1453) between the English and the French.

We had two very pleasant trips into Bastide St Louis over our three days in the area. On the first morning we decided we would find the railway

station for future reference and also see where the Canal du Midi passes through the town. This was a very picturesque ride, particularly where we came to the Point Vieux bridge and crossed over. From the bridge, particularly in the late afternoon and early evening there are a spectacular views back towards the citadel. At the end of the bridge there is a small chapel, the Notre Dame de La Sante (Our Lady of Health), built to serve a nearby plague Hospital. Built from 1527, this curious little building built into the side of the bridge has a single line of pews and certainly wouldn’t fit in too many people at the one time. Its situation on the bank of the Aude River means that it suffers whenever the river is in flood.

Our first ride into town as per 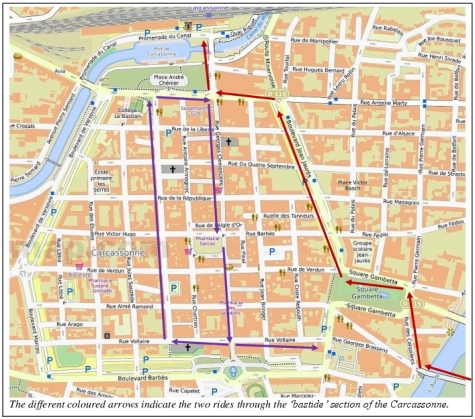 map below took us all the way to the Canal du Midi and the lovely little bridge that took traffic over the canal to the Railway Station forecourt. The longest stretch of road we rode down was Boulevarde Jean Jaures and we didn’t know it at the time but this road marked one long side of the original bastide wall; cars travelled over the top of the old moat! We would not come across physical remnants of the wall until the next day’s ride.

Today’s ride was all about getting a sense of the layout of the city and getting a good appreciation of the canal. We were able to rest and appreciate some time in the small park beside Port de Carcassone, the lock and stopping point for those travelling by boat up the canal to Narbonne or ports in between. For those who have never seen canal locks, it is time well spent watching the process of large boats entering the lock, the locks filling or emptying of water and the boats heading further along the lock in their chosen direction.

The other beautiful place we spent some time in that morning was the beautiful Square Gambetta, just over the river on the way to the railway station. It was full of flowers, fountains and sculptures reflecting a rich art culture in the town.

The next day we returned to Bastide St-Louis and took the same route as the previous day to the Port de Carcassonne. From here we headed down the pedestrianised, main shopping street of the town to the centre of the old Bastide. As all the tourist brochures of the town suggest, we stopped at Place Carnot for coffee and cake and to people-watch from the café chairs set up in the middle of the ‘Place’ under the plane trees. Looking at the map of town, Place Carnot is the very centre of the old Bastide town and so conforms to the usual format of these towns; streets arranged in a grid pattern around the central market square of the town. Fruit and vegetable market stalls are set up here every Tuesday, Thursday and Sunday.

It was only after we left Place Carnot and headed down to the other end of Rue Georges Clemenceau that we reached some of the remnants of the old wall that once surrounded the Bastide de St-Louis. There was a large gate at the end of this street and we assumed that we had found one of the old gates of the town. Alas no; this was called the Gate of the Jacobins and it was only built in 1779 to replace the original gate. One of the consequences of living inside a completely walled town is health issues; the town fathers at the end of the 18th century decided the walls and narrow gates created “dangerous miasmas” and wanted to improve the circulation of air within the town. Like the beautiful fortress on the hill, the bastide’s walls were no longer necessary for defence or helpful in any other ways so they began to be demolished.

We rode down to the corner of the Bastide town past the fountain in ‘Place d’armes’ and it was here we found our first remnants of the old wall as can be seen in the photo on the right below. There are also similar remnants at the other end of the road (Boulevarde Barbes). There was also a moat around this town and so these were filled in to become the grand boulevards that run along the line of the old ramparts.

We turned back from the corner of the bastide and headed back in the other direction along the Boulevarde so we could plunge back into the centre of town along a different street. We turned right at the St Michel Cathedral, a fourteenth century church whose facade shows all the signs of the events of the last six hundred years. At one time it was integrated into the old walls of the town but was renovated in the 19th century.

From here it was back through the Bastide St-Louis and then riding back across the Pont Vieux to our Camping Ground. It was late afternoon and it was time to get prepared for our long drive tomorrow across France to our next destination, Bordeaux.

We first encountered the Canal du Midi in 2014 when we stayed for a month in a French village called Olanzac in the ‘former’ province of Languedoc. We travelled the road between Toulouse and Narbonne many times and so the canal was a daily geographical feature of our lives. We crossed over the canal at Homps most days as we explored the region. On one day we decided we would hire some bikes and ride along the canal near Puicheric. In this area the bike path was pretty rough so our ride that day was not ‘smooth sailing’ to pick a canal metaphor. We rested for half an hour at one of the locks to examine its complex processes, watching in particular a huge canal boat with a load of sun-bathing tourists on board; we didn’t think it would fit. As it squeezed into the lock, we decided to head off but were called back to the boat by a voice calling Gayle’s name. It was a friend from Brisbane. You never know when journeys will cross in the most unlikely places.

It was along this section of the canal that I noticed the cement blocks on the edge of the raised banks of the canal. They appeared to be connected to the vineyards next to the canal but their function still remains a mystery for me to this day. 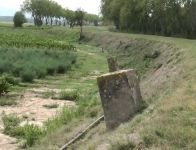 The canal looks like a normal waterway through the countryside, the only anomaly is that it is so regular. This canal is part of a system of canals and waterways called the ‘Canal des Deux Mers’, a grand project started

at the end of the 17th century in the reign of the grandiose, absolutist monarch of France, Louis XIV. Trade was being squeezed in France at the time by its European rivals so the idea of being able to ship goods across the French countryside rather than run the perils of the Mediterranean and the straits of Gibraltar was desirable. All they needed was a canal from Toulouse to connect with the Garonne River heading to Bordeaux and a canal going the other direction heading to the Mediterranean past Narbonne. Sounds hugely simple except for the problem of running a canal up a mountain and down the other side. The other trick is to ensure you can supply the canal with continuous water while it is performing these amazing feats of going up hill and down dale. The ingenuity of completing such a spectacular project had earned the Canaldu Midi such accolades as “the greatest construction work of the 17th century” as well as being nominated as a UNESCO World Heritage Site in 1996.

It was officially finished in 1682 but any project involving rushing water and silt is bound to demand regular maintenance. Today it has to close for a couple of months each year to clean the rubbish and silt out of it.

The original canal did not pass through either Carcassonne of Narbonne, two of the major cities along its path. A diversion canal was built through Carcassonne in 1810 and today is a central feature of the Bastide St-Louis. It is ironic that the canal’s Port de Carcassonne sits beside the central railway station of the town. It was the railway that slowly but surely destroyed the original function of the canal, the transport of trade goods across France. Unlike so many other forms of human technology over the centuries, the Canal du Midi is now busier than ever and makes a huge contribution to the economy of Southern France through tourism.