I was 63 when I first saw Carcassonne in 2014. Carcassonne is one of those places that you see images of cone topped towers evoking all the ideas of a fairy tale kingdom or at least one inhabited by Robin Hood (1991 Film…Princes of Thieves!). It was a great day to be free from both a life-time of work and be able to walk the walls of Carcassonne.

Carcassonne has some similarity with Antibes

in that for some centuries it was a border town with dubious enemies wishing to control it. Apart from being on the wrong side of the old French border, Carcassonne was, because of its geography, placed at a strategic trading point between centres on the Atlantic coast of France and those to the east on the Mediterranean Sea’s coastline. Trade routes from Spain (Aragon) passed through Carcassonne, heading north, over the edge of the Alpes to Paris. As a result of its position, its earliest inhabitants decided they needed a fortified position for the times when their trading friends from all directions came with their armies. After the Romans arrived on their way to the west coast of France, they decided to build their own fortifications on Carcassonne’s hill, and they stayed for five hundred years before the onslaught of tribes from northern Europe overwhelmed the fading empire. Roman towers can still be inspected on the inner walls of the Carcassonne fortress.

When the Romans left in 462, control of Carcassonne returned to descendants of the original Gauls who inhabited the region, the Visigoths under their King, Theodoric. Control of the area lasted another four centuries before another family dynasty controlled the fiefdom of Carcassonne (the Bellonids) until the arrival in the 13th century of Papal armies sponsored by the French monarch for the apparent purpose of ridding Carcassonne and the surrounding region of Languedoc from those spiritually dangerous types, the Cathars. This Papal Crusade was the only crusade

directed anywhere else in the world apart from towards the Holy Land…the Cathars were apparently as dangerous as the Saracens. The city was incorporated into France in 1247 and Carcassonne became a border fortress between France and Aragon. The map on the left is a very good summary of the complexity of the situation at the start of the 13th century at the southern border of modern France. This map and the cartoon summary of Carcassonne history below comes thanks to a wonderfully informative web site about Languedoc found at https://www.creme-de-languedoc.com/Languedoc.

In 1209, fresh from the complete destruction of Beziers and its Cathar population, Simon de Montfort takes the Carcassonne fortress and expels any Cathar citizens left there. Any surviving citizens moved to the other side of the river and so from this camp developed a new town that became Carcassonne-Le Bastide St Louis, across the river from ‘Le Cite’, the fortress.

So when I returned to Carcassonne in 2019 to spend two or three days in the area, it was to Camping de la Cite we went to set up home for three days. The camping park was on Chemin Bernard Delicieux, a name that would only be interesting to those who have heard of the Franciscan Lawyer/Monk who spent so much of his energy between 1300 and 1320 defending the rights of Cathar prisoners on trial for their lives in Carcassonne. In the process he made

some powerful enemies and eventually he was arrested, condemned to prison for life in chains, solitary confinement, bread and water. His judges asked that, due to his advanced age, he be spared these extremes; the Pope of the time, John XXII, countermanded these orders and this great Franciscan died shortly after under these harsh conditions.

As the map on the right indicates, we were able to jump on our bikes at this very pleasant camping park and be within easy distance of the main gate of ‘Le Cite’ as well as the main bridge that took us over the River Aude to the new city of Carcassonne

Before you enter the Carcassonne Fortress gate, you have

to pass a huge stone statue of a woman to the right of the bridge that takes you through the wall of the citadel. The inscription under the statue reads ‘Sum Caracas’. The ‘Dame Carcas’ story hails back to the period between 725 and 760 when the Saracens or Muslim warriors who had come up from ‘Spain’ and had conquered the fortress. The Dame Carcas story speaks of an intelligent and brave woman saving the fortress from Frankish soldiers who had come to retake it. The story is also meant to be an explanation of where the name of the citadel came from. The original statue from the 16th century is preserved inside ‘Le Cite’ and this impressive replica welcomes visitors today. Unfortunately, there is little historical support for the truth of this tale.

As visitors first pass through the first gate,

they enter the section of the fortress between the two walls. If you look at the stone-work on the internal walls, it shows a mix of different masonry, evidence of the different eras when these walls were being built. There are still some significant towers and wall sections that hark back to the fourth century and are of Roman Construction. The map of La Cite de Carcassonne further on in this article shows these Roman sections highlighted in red. 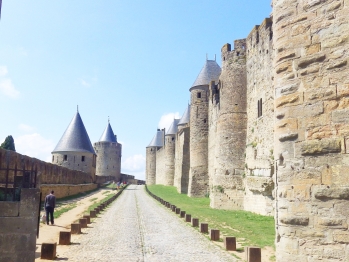 When the Carcassonne fortress lost its importance as a border stronghold, its upkeep deteriorated and by the 1830s it was facing the fate of so many of the town and castle walls of France that would be demolished. (Note image to the right above from https://www.creme-de-languedoc.com) It was saved from destruction and the architect Eugene Viollet le Duc was commissioned to restore it. The results have been criticised by some who argue that rather than restoring the historical architecture as it was originally, some imagination was used when beautifying such things as the conical roofs of the towers. However for me, there is sufficient left of the Carcassonne citadel just to be grateful that the approach of ‘pave paradise, put up a parking lot’ didn’t prevail.

Once today’s visitors pass through the second line of walls, they are immediately plunged into the heart of a medieval village which unfortunately consists mainly of shops selling plastic gargoyles and crusader swords. If you

can make your way out of this necessary tourist crush there is so much to see of interest in La Cite. Most people head towards Place de Chateau which is the entry into Chateau Comtal, the ‘castle within a castle’. Here you can stroll the corridors and ramparts of this 13th century chateau built at the same time as the outer walls after the expulsion of the Cathars and the citadel becoming a French border fortress. It has been turned into a museum of the 13th century and there is a lot to see. While there is no charge for entering La Cite, there is a fee for entering Chateau Comtal.

If you have chosen to tour the Chateau at the start of the day, most of your morning will have passed and you will be ready for lunch. There are plenty of places to eat but the prices are hyped as you are a captured audience and it is a long walk back to the town’s café district. Suck up the prices, enjoy lunch and head off to walk the rest of La Cite. The other major site to visit is the beautiful Basilique St Nazaire but before heading down Rue St Louis, walk down to the Porte D’Aude. Here you can enjoy the views over the town of Carcassonne, the River Aude and the battlements of Chateau Comtal.

and Celsus (not to be too picky, but it is a ‘Minor’ Cathedral) is almost as lovely as the church itself. It was, as usual in most French towns and cities, built over the site of an earlier church from the 5/6th century. This building hails back to the 11th century when the Pope of the time, Urban II, came to visit and bless the site. It is worth a quite contemplative stroll inside, particularly to check out the beautiful stained-glass windows telling the traditional stories of the old and new testament; if your eyes are good, check out the ‘Jesse Tree’. To my shame, the thing that took most of my inspection time were the gargoyles on the external walls…who doesn’t love a good gargoyle and why modern plumbers don’t install more of them to process the waste-water from our roofs is beyond me. It was a great surprise to me that evening when we were having a meal outside a café down the hill from the La Cite that I noticed modern gargoyles with demon heads sprouting from the end of their neighbours down pipes. Let us hope it is a fashion that is taken to the rest of the world!

Speaking of medieval plumbing, it was good to see that the old source of water for the citizens of this fortress is still honoured in La Cite by a piazza of its own, Place de Grand Puits. When you continue your stroll around the maze of streets you will find this grand, ancient well taking pride of place on the other side of La Cite from the Cathedral. It stands forlorn, providing water no more to the local washer women, probably not getting as much attention as Dracula’s coffin that stands equally as proudly outside a nearby tourist shop.