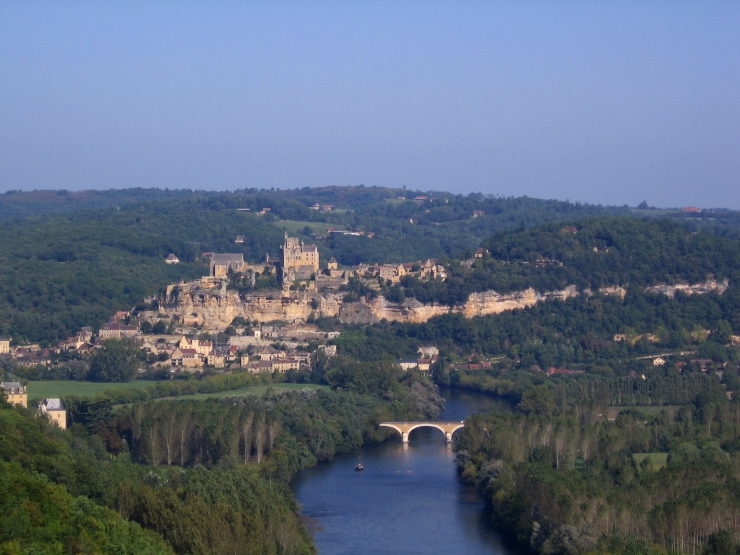 The above panorama is a beautiful picture of Beynac Castle from the parapets of Castelnaud Castle just down the river. It illustrates the curious proximity of one major fortress from the Middle Ages to another. It is believed that it was constructed sometime late in the 1100’s in response to the presence of Beynac Castle down the river. Its name, Castelnaud/Castelnau means ‘New Castle’ and presumably this suggests it was second in construction after Beynac. It sits on a strategic point on the Dordogne River where the River Ceou joins the much larger Dordogne. The first historical mention of Castelnaud is when it was attacked by the English/French military adventurer Simon de Montfort in 1224 for its Cathar associations. Bernard de Casnac was a powerful local lord of the area who possessed the other strongholds of Domme and ‘Montfort’ as well. He was also a supporter of the dualist religious beliefs of the Cathar heretics. He was driven from Castelnaud by Montfort and was no doubt a character who believed in the old adage, ‘Revenge is a dish best served cold’. He retook Castelnaud the following year and decided to hang the garrison left behind by Simon de Montfort. It is unclear as to which side of the English/French divide in southern France de Casnac sat but his position must have been awkward as the Bishop of Bordeaux (perhaps Gerard de Mallemort, 1227–60) ordered that Castelnaud be burnt down a few years after he had his revenge on Montfort’s garrison.

The Castelnaud we visited unfortunately has no remnants left of the castle fought over by Simon de Montfort and Bernard de Casnac. However the stones of this original castle have been pillaged over the last 1000 years so who knows if some of  its stones haven’t been incorporated into later walls of the castle. When we visited 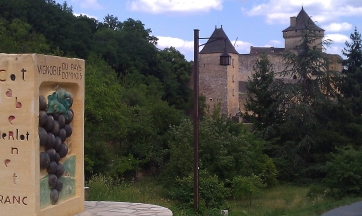 Castelnaud, we had to pass by a peaceful vineyard with little signs of the violence that swirled around this castle for centuries. When the Hundred Years War began in 1337, the owners of Castelnaud were aligned with the English kings who controlled Aquitaine. In many ways they were a border outpost on the Dordogne River and on the other side of this river stood Beynac Castle, aligned with the French Kings. Castelnaud changed hands seven times during this 116 year long conflict; Beynac did not fall during the 100 Years War. The last siege of Castelnaud occurred in 1442 when local lords decided enough was enough and attacked the castle for the last time. After three weeks, the English Captain in charge of the defence surrendered.

Whilst the region suffered immensely during the French Wars of Religion over the last 30 years of the 16th century, Castelnaud had been refortified so it wasn’t assaulted during those years. From the 17th century,  the castle’s function as a military stronghold faded as castle and city walls no longer protected the citizens from artillery campaigns. Alas it wasn’t a comfortable castle for everyday living so the Caumont family moved elsewhere and Castelnaud was neglected and fell into ruin.  To add insult to injury, its stones were mined again at the time of the French Revolution. It gained new purpose in the 20th century as a tourist attraction and it was rebuilt between 1966 and 2012.

The above diagram of Castelnaud today is from the pamphlet available from the kiosk in the castle.

We had just travelled from Beynac Castle to Castelnaud and my young man dreams of castles and ‘knights in shining armour’ adventures were coming true. Apart from strolling the rooms and parapets of the castle, we were able to get some insight into life in the Middle Ages by inspecting the exhibits in the Castle Museum. It contained all the usual devices for hurling stones and other missiles at enemies attacking the walls (Mangonneaux, Trebuchets etc). The primitive canon with the large wooden wheels gave a hint of what was to come in future centuries that made Castelnaud’s stone walls and strategic position on the Dordogne River entirely ineffective in ensuring dominance over the countryside of Perigord. 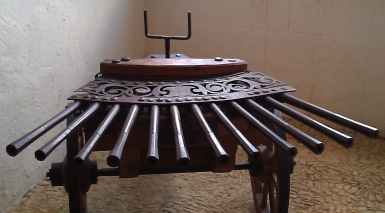 From Castelnaud, the rest of our day was planned out carefully. From here we would drive to the old ‘Bastide’ town of Domme before driving via Montfort to Sarlat for our evening meal. Good Times!