The above song highlighting the place of Central Park in

New York imagery is one of only two songs from the 21 songs played at Simon & Garfunkel’s 1982 concert in Central Park that wasn’t written by Paul Simon. The song captures the mixed reputation of the park in the 1980’s when it had stopped being financed by NYC Parks and was in need of significant refurbishment and renovation. With a long history of ups and downs since 1857, the park was taken over by the Central Park Conservancy in 1980 which took over the financing of the redevelopment of the park. This process was very successful as it is estimated today that approximately 38 million people visit the park annually. We have had two visits to New York and visited the park on both occasions. The problem with New York is that there are so many places to visit, that travel advisors spend a lot of time discussing with clients which part of New York they want to stay in. I would argue that a hotel near Central Park is a great idea; up early for a walk in the park, a different area for each day of your stay, leaving the rest of the day to visit the other sights of New York. The map here shows the half of the park closest to Time Square that this article covers. 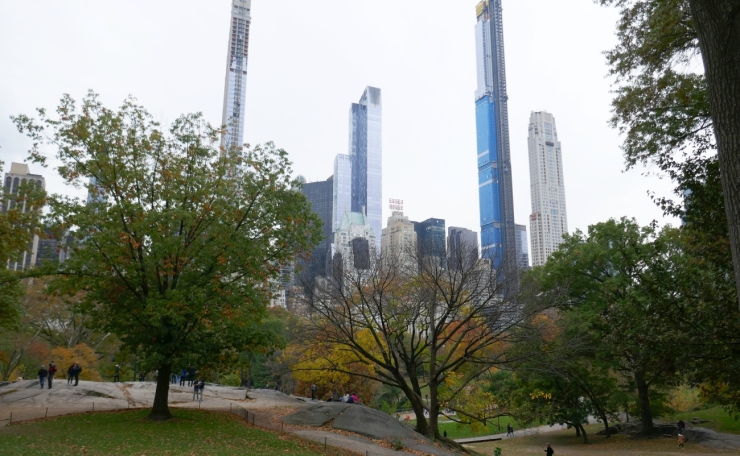 We have visited Central Park in both Autumn and Winter, two very different landscapes on show but both beautiful. On both occasions we approached the Park down 7th Avenue after strolling through Times Square. Hopefully before you arrive at the gates of the park you have made a decision as to how much of the park you are going to try to see and what your means of transport will be. If your intention is to see as much of the park as possible in one visit, the walk would be exhausting. You can hire a bicycle, a horse drawn carriage or something in between these two, a bicycle drawn carriage for two. These speedier options will give you greater coverage if short of tour time.

There is plenty to see at the southern end of the park such as the Central Park Zoo and the Woolman Ice-skating rink but our first major target was one of the more famous sites in the park, the Bethesda Terrace. On the way we passed a bronze hero, Balto the Sled Dog, whose statue was placed here in 1925 to commemorate his heroics, along with other sled dogs, who delivered Diphtheria medicine to the children of Alaska.

Bethesda Terrace exemplifies all that is picturesque about Central Park. Apparently 305 films have been made or have scenes in Central Park, making it the most filmed location in the world. (Even Balto had three animated films made about him!) The above statistic doesn’t include TV shows, such as ‘Friends’ whose characters danced around in the Bethesda Fountain.

Heading back towards Time Square from Bethesda Fountain is a large tiled tunnel under Terrace Drive that leads visitors to the long straight walk called the Mall that takes you back to  West 59th street. On both occasions we visited this spot, there were bridal parties getting their photos taken in this beautiful tunnel.

No matter your means of transport or the season, you are probably ready for a coffee by now so a visit to the Loeb Boathouse café will be required; it can be seen in its winter environment at the end of ‘The Lake’ in the images above.

Perhaps the most beautiful feature in Central Park is the Bow Bridge which should be the next destination after coffee. It is a white cast-iron pedestrian bridge built here in 1862. In the images here, the large urns on the balustrade can be seen which were returned here in 2008 as part of a renovation; they went missing 80 years ago. The area in the back ground of these images is the ‘Woodland’ where New Yorkers go to jog or peacefully wander away from the crowds.

‘The Eldorado’ built in 1931 (see image here) and ‘The San Remo’ built in 1930. These apartment blocks along Central Park House West are home to the rich and famous, particularly from the film industry.

After coffee, the next logical destination is Strawberry Fields, located near an entrance to the park on Central Park West near 72nd street. The Dakota building where John Lennon and his wife Yoko Ono lived is directly over the road from the park. It was outside this building that John Lennon was shot in April 1981 and a memorial, donated by the City of Naples, was created here. Yoko Ono asked that it be a living memorial, being quoted as saying that “there are enough statues in Central Park”. The images below show the ‘Imagine’ mosaic in Autumn and Winter.

Basically after visiting Strawberry Fields you have

completed a reasonable visit to half of Central Park. If you have some energy left you can walk down past the Brambles and turn right onto the 79th Street Transverse and visit the Belvedere Castle which sits on top of Vista Rock, the second highest view in the park. There is no attempt to suggest that it is a real castle or a copy of one; it was designed in 1919 as a folly, one of those extravagant decorations to formal gardens that were very popular in large landscaped English gardens of the 19th century. It is now the Visitor Centre for the park. 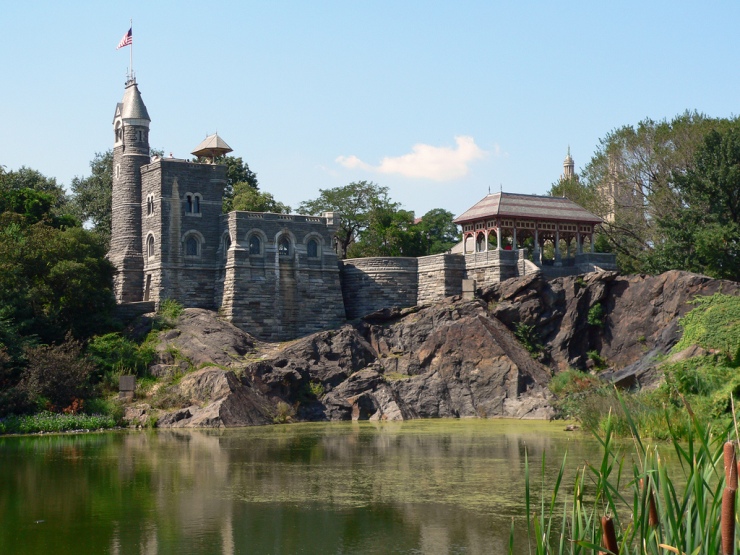 If, like us, you decide to leave the other half of the park for another occasion, two of the great cultural sites of New York are not far from Belevedere Castle. By continuing along the Transverse, you will exit the park at Fifth Avenue and by turning left you will almost immediately find yourself out front of the justly famous Metropolitan Museum of Art. If this museum is not on your list, walk another four blocks down and on the right is the Solomon R. Guggenheim Museum, established in 1939 for displaying art from the late 19th century to contemporary art. The building housing this collection is described as a landmark of Twentieth century architecture designed by the famous architect Frank Lloyd Wright.

What better way to end this piece on Central Park with some Paul Simon?