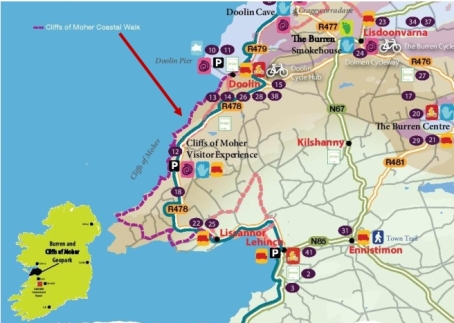 For visitors to County Clare, staying in Doolin is a great idea. Drive west and you enter the Burren, drive south and you arrive at the Cliffs of Moher. If you check out bucket lists online for the most picturesque places in Ireland, the Cliffs of Moher will be number 1. Whilst on the day we visited the cliffs, we drove the 8 Kms to the Cliff’s Visitor Center but if we were more athletic, we could have chosen to do the day trek from Doolin down the Cliffs of Moher Coastal Walk. It is about 20 km from Doolin to Liscanoor and takes walkers between 4 to 5 hours to complete. If you get exhausted along the way, there are shuttle buses that will collect you.

The Visitors Centre for this spectacular area is about half way along the Cliffs of Moher coastline. Outside the centre there is a statue that very creatively summarises the Cliffs of Moher experience. At the top of it is a replica of O’Brien’s Tower standing on the headland and from the top of the actual tower you get views back up towards Doolin and down the coast towards Hags Head. The second feature is the aged walker contemplating the horizon from the cliff edge. Further down there are two puffins seeking shelter against the cliff face. Notes from the Visitor Center tell us that the cliffs are “home to Ireland’s largest mainland seabird nesting colony, with 20 species of nesting birds, including 9 species of breeding seabirds, and up to 30,000 breeding pairs.” The next level of the statue highlights the geology of the cliffs which are sedimentary layers of sandstone, siltstone and mudstone that 300 million years ago were part of a delta created by a series of ancient rivers. The statue finishes at it base with representations of the huge waves of the Atlantic Ocean pounding on and eroding the cliffs. This statue is a clever summary of a visit to the Cliffs of Moher but it doesn’t replace the experience of walking along the cliff paths and gazing out to the Atlantic Ocean horizon. It also doesn’t replace a visit to the Visitor Centre, the diagram below right gives an indication of the many attractions of this impressive centre. 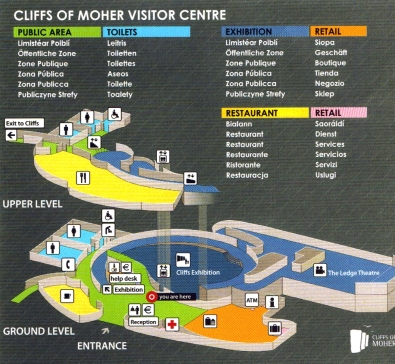 From the visitor centre it’s a short walk up to the main headland and O’Brien’s Tower. It was built in 1835 by a local landowner, Cornelius O’Brien, who was a descendant of Brian Boru (941-1014), a warrior who first made himself King of Munster and then went on to conquer much of Ireland, eventually declaring himself High-King of Ireland. His descendant Cornelius decided that tourism would benefit the local economy and so constructed this tower to give visitors a better chance to appreciate the amazing views along this coastline.

From O’Brien’s Tower visitors have a choice of directions, north or south, to take in the views. Along from the tower you get to see the fragile looking Branaunmore Sea Stack that was once connected to the coastal cliff but now stands defiant, bruised and battered by the winds and rains of the Atlantic. One good thing about its isolation is that it provides safe nesting sites for the many bird species away from the cliffs and safety from humans and predators alike. However the photo on the right below illustrates one problem for the birds; good roosting spots are in high demand. 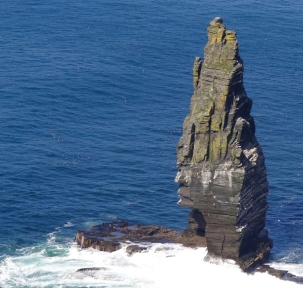 Heading north is a great walk…the only drawbacks are the large number of fellow travellers that you share the path with as well as the cold winds that come in off the ocean.

We weren’t hardy enough to take the long walk down to Hag’s head but a quick trip in the car to see the lonely Watch Tower is essential. This tower isn’t the first building on this spot. The original fort built here was replaced in 1808 when local powers decided that the threat from the continent of an invasion by Napoleonic troops was too great so the current watch tower was built. It also had telegraph capabilities to send out word if a French Fleet decided to invade via the Clare coastline. Both capabilities are well in the past for this haggard building that now only supervises the rocky outcrop that locals believe resembles an old hag’s head gazing out to sea.