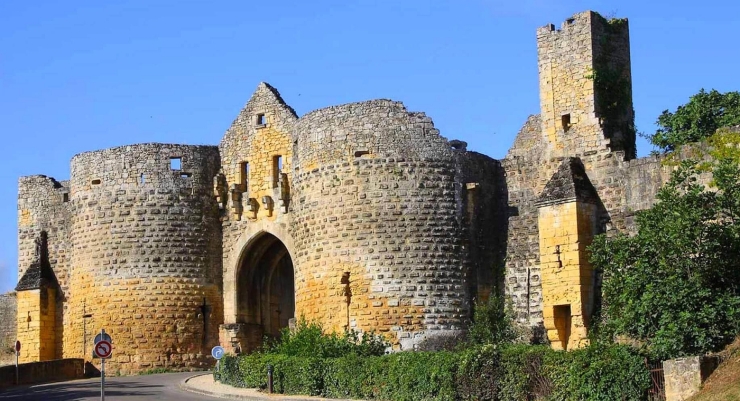 We visited five villages along the Dordogne River valley on our stay in the region which were structured around their needs for defence in the times of war. Three of these villages were built around Castles, one was a fortified town and in the other, the citizens had to retreat to fortified caves in the cliffs of the Dordogne River in times of strife. Our destination on June 13 was the ‘Bastide’ town of Domme.

Domme was a fortified town built between the 12th and 14th centuries in regions of France such as Aquitaine where the conflicts were so regular that in order to keep both farmers and towns-people safe, you needed more than a local defensive castle. These bastide towns were built on hills with defensible walls around them. Citizens of bastides had their homes in the town and their farmlands outside. They were generally

built with a rectangular structure centred around a public square and a church on the corner. Whilst such towns were controlled and taxed by the local lord, the citizens were independent and the society in a Bastide town was a far cry from the earlier feudal relationships between aristocracy and serfs. These walled towns became very important in defending average citizens during the ‘wild-west’ period of the Middle Ages in France.

The town of Domme was founded in 1281 by Philip III of France at a time when he was campaigning along the Dordogne River. Philip, also known as Philip the Bold, died 3 years later from dysentery in Perpignan after he had taken part in a campaign against the Kingdom of Aragon (Pyrenees kingdom, south of France) which is described by one historian as the “the most unjust, unnecessary and calamitous enterprise ever undertaken by the Capetian monarchy.” Philip the Bold got mentioned by Dante in the Divine Comedy as “ ‘the small-nosed’ and ‘the father of the pest of France’, a reference to Philip IV of France.” (Thank you Wikipedia!) The Iron King, Philip IV, comes up later in the Domme story with its later function as a prison for the Knights Templars. 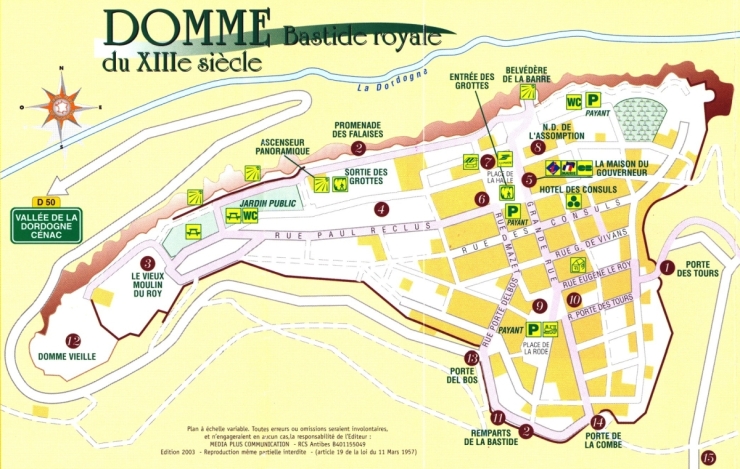 It was well into the afternoon the day we drove up the hill to Domme, through the imposing Porte des Tours, found a park and made our way to the central Square, Place de La Hall. Domme has earned entry into an association of villages around France as being one of “The Most Beautiful Villages of France” and our first sight found nothing to undermine that status. The main square was lovely with the old Town Hall (plus tourist Office) prominent on one side with the Governor’s House behind it with its towers and turrets. It was originally built in the 1400s and rebuilt in the 17th century; the builders must have decided they needed a last ditch fortress in case the town walls were breached.

The second major building that fronts onto the main square is the Parish Church of Our Lady of the Assumption built in 1622. Whilst being a generally plain building, the decorations over the front door captured my attention. Domme itself had a difficult time during the Wars of Religion (1562-98) and the Church of the time was destroyed in the process and this building replaced it early in the next century. 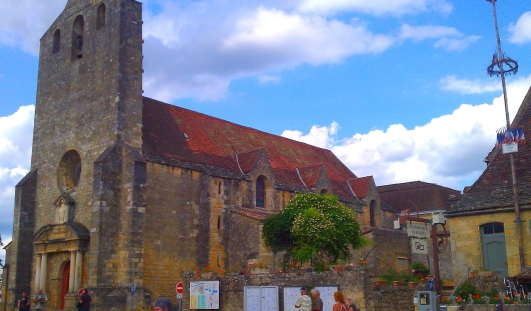 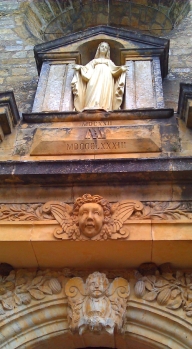 When strolling the main square of Domme, the building that captures most of the attention is the old market building in the centre. Domme is built on a limestone hill and without knowing that, the visitor would be surprised by the sign on the building announcing “Entrée de la Grotte” (Entry to the Cave). Domme is built over a series of limestone caverns and so one of the key tourist excursions that can be taken if you are staying in Domme is the guided excursion down into the mountain to explore the stalactites and stalagmites of this cave system. Whilst there are no cave paintings/engravings of pre-historic folk in these caves, the skeletal remains of ancient rhinoceros and bison were found here and are on display.

One of the great things to do in one of the most beautiful villages in France is to go for a walk around the village. Heading north, the visitor only has to walk one block to find themselves on “Promenade des Falaises” (Cliff Walk) to take in the panorama of great views down the valley that cradles the Dordogne River. (See town map at start of blog.) The village’s situation at the top of these cliff indicate why Philip the Bold thought it was a great spot for a fortified town. This unfortunately didn’t stop 30 Huguenot soldiers led by Geoffroy de Vivans during the Wars of Religion in 1588 climbing these cliffs and over the unprotected parapet to open the gates on the opposite side of town to let in the rest of the army. It was during his occupation that the original church was burnt down. The Protestant occupation of Domme only lasted four years before the ruined town was surrendered to the Catholic forces.

From your cliff side promenade, turn left and using Rue Paul Reclus, make your way back towards the main square and turn right down the street leading to Porte del Bos. (Image  on left) Turn left at this old gate and stroll along the Bastide walls of the town and you will eventually make your way to the main gate of Domme, Port des Tours, that you may have driven through earlier on your visit.

The earlier list in this blog of the historical troubles that affected the Perigord region of France notes the twelfth century, when Domme was built, was dominated by the presence of English armies in the Aquitaine region of France. The other historical movement associated with this period were the European Crusader armies who attempted to reconquer the ‘Holy Land’. There were nine Crusades from 1096 to 1272. These military campaigns to Palestine generated an organization called the Knights Templar who were based on the Temple Mount in Jerusalem and assisted crusaders and pilgrims visiting the holy city. They were founded in 1119 and were disbanded by Pope Clement V in 1312. They were a powerful organization who had amassed great wealth and influence throughout Europe, particularly with the financial system they developed to assist crusaders. Their destiny was to fall foul of the King of France, Phillip IV, whose many military campaigns saw him desperate for money. He resolved his financial problems by closing down the Templars and confiscating their wealth. While his father built Domme in 1281, 30 years later Philip Le Fer imprisoned Templars all around the country, particularly in the towers of Domme’s main gate, Porte de Tours.

The imprisonment of Templar Knights in Domme would not be a significant part of Domme’s history except for two things. The first is that the Templar prisoners left behind ‘mysterious’ etchings on the internal walls of Porte de Tours. The second is the destruction of the Knights Templar meant that what happened to their fabled immense wealth has become an everlasting and insoluble mystery since that time.  (Note the theory of treasure ships out of La Rochelle). Any clue from books or walls around Europe that hints of Templar presence has been a source of great interest to many up until the 21st century. Thus, the presence of Templar signs in Domme is a significant tourist attraction today. One extreme reaction by a visitor inspired him to write the following conclusion to his article about the Domme Templar engravings.

Stepping out of the guardhouse I found myself unexpectedly shaken and dazed. No interior space and few artworks have ever affected me so powerfully; the sense of their presence, of emotional contact with the inhabitants is incredible. It is akin in a way to the cave paintings at nearby Lascaux, except that at Domme a combination of intense devotion, injustice, and anger emanates from the walls like a heat, challenging you to walk away without reflecting on how it all came about.. There amidst the many carvings and inscriptions the situation of the Templars in their darkest time is brought closer to knowing than anywhere else…” (Lost Graffiti of the Templars; Jeffrey Glover)

While stories of the Knights Templar are always interesting, the Christian symbolism engraved on the internal walls of Domme Tower Gate are evocative but in the end, unrevealing of deeper secrets for my limited imagination. However, Domme itself is a fascinating place to visit and justifies its description as one of the most beautiful villages in France.

Perhaps the last memory of a visit to Domme should be the views of the Dordogne Valley it enables.

APPENDIX 1: The Fate of the Templars

If you are interested in the story of what happened to the Templars, you could do no better than read Maurice Druon’s novel The Iron King. This tells the story of Phillip IV’s decimation of the Templars. He went on to write a series of seven novels about the machinations of the France’s 14th century monarchs but be warned, they are addictive and will cause late nights and sleep loss.