We arrived back in Helsinki by boat

from Stockholm early in the day and so we had the rest of the daylight hours to explore Helsinki that was starting to feel like a home away from home. Luckily the cafes were open so we could discuss over coffee whether we would take the Red Bus tour or just do the walking. Strolling was more our style so we decided to use the central railway station as our base, a building that brought back memories of the triumphantly fascist façade of Milan railway Station. We decided to head first to the Nation Museum of Finland and spend the morning learning about the prehistoric finds in this part of the world. 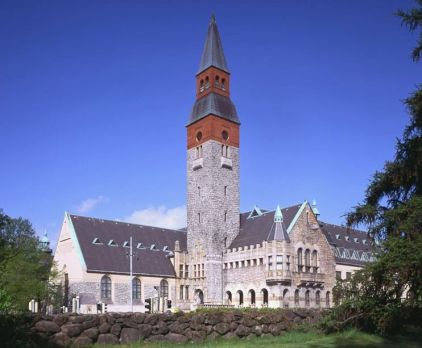 The National Museum of Finland is housed in a beautiful building just down from Finland’s Parliament Building. On entering the Museum, your eyes are drawn to the frescoes on the roof of the central area which depict characters and stories from the Kalevala. I had never heard of this work before of epic poetry and myth that is the record of the oral stories of the Finnish people from the 17th century. Finland itself is only 100 years old and this work apparently is one of the cohesive forces that brought about a sense of Finnish National language and identity. The Kalevala was written by a doctor, Elias Lönnrot (1802-1884),

who did the field work needed to save the material from loss in changing times. The frescoes on the roof are riveting such as the image on the right and I wished that I had booked a guide to tell me some of the stories that the Museum’s ceiling told.

The other main attraction in this Museum was a meticulous and scholarly exhibition presenting the material evidence of 10000 years of pre-historic finds in the area of Scandinavia that is Finland.

From the Museum we walked up the hill for 10 minutes to the underground church called Templeliaukio. It is a church built after World War 2 and completed in 1969, excavated out of a rocky hillside. It has excellent acoustics due to the rock walls. This unique Church is apparently one of the major tourist attractions in the city which was illustrated for us by the large numbers of ‘bused’ in tourists who shared our visiting time. We spent half an hour seated in this beautiful consecrated place and unfortunately my time was spent mainly in watching my fellow tourists in action. Most of them had no sense of the original purpose of the building, for prayer and reflection on life’s higher issues. The church seemed to be full of folk taking selfies and retaking selfies when their original attempts did not appear to suit their intentions to portray themselves in the best possible light; the interior of Templeliaukio being only important as the current backdrop given that there appeared to be little interest in the nature and purpose of the building itself. The local parishioners must have spent their days gritting their teeth as they collected the entrance fees.

On our eventual way back to the Railway Station later in the afternoon, we passed by an open space beside the Helsinki Music Centre. A group of highly skilled drummers were preparing to perform for a large numbers of strolling Finns who had decided to stop, drink coffee and listen to the music on the lawn. It is a cliché to say the performance was spellbinding; however we stopped and spent the next 30 minutes rooted to the spot…the quality of the music was compelling. This was the fourth occasion in our few days walking the streets of Helsinki where we just had to stop and listen to musical groups performing live in the streets. The music scene in Helsinki is in great shape with the only worry being that there might be too many

maestros looking to make a living out of their musical talent for the one city.

Of course there was a large green area in front of the Music Centre that contained a giant sculpture called the ‘Singing Pike Monument that was both confronting and beautiful. The sculpture is by artist Reijo Hukkanen and was inspired by a poem by Aaro Hellaakoski, that tells the story of a Pike that leaps out of the sea and begins to sing so beautifully that even the birds stop to listen. What an amazing adjunct to the Music Centre and the drummers who played for the crowd was this sculpture and the tale of the Singing Pike.

The Drummers weren’t the only musical group we had stopped to listen as we walked the streets of Helsinki.  Closer to the Esplanadi, the Brass band in the image below were blasting out a very groovy version of “Oh Baby, I Think I want to Marry You!” What a place!