Vancouver is one of those wonderful cities of

the world whose geography dictates that it is certain to be a beautiful place to visit as well as being a centre for striking out for other beautiful places. The visitor has so many options;

However, missing out on what visiting Vancouver itself has to offer is an oversight not to be tolerated. If you are using this city as a hub for other destinations, spend some time here before or after your trip and you will be greatly rewarded.

This article sets out a series of day activities to choose from that shows you the best that Vancouver has to offer. It is based on a visitor staying somewhere close to the centre of Seattle and heading out from there. Day trips should not be too much longer than five hours of walking, biking, busing or training to leave you the late afternoon to get to know the beautiful centre of the city and appreciate the pubs, cafes and restaurants. Here are the key tours.

As can be seen from the map below, Stanley 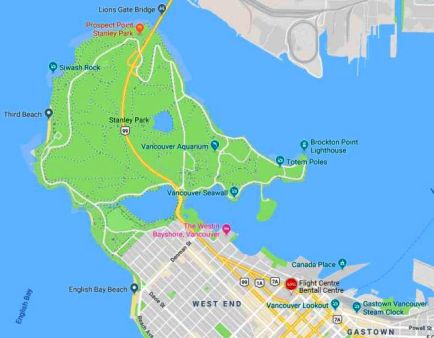 Park is a huge community space (405 hectares) on the edge of the centre of Vancouver, with Vancouver Harbour on one side and English Bay on the other. On the day we chose to visit this Park, we decided it was too big for walking, we were too advanced in years for jogging it (as so many locals do) so we decided the bike ride was the best way to see as much of this beautiful area as possible. Heading out from our city hotel, we rode down to Canada Place on the edge of the harbour, admired the sea planes on the river and rode the paths towards Coal Harbour.

Public Art is always on show around

Vancouver and is always delightful but often challenging and confusing. On the shore line of Coal Harbour is a structure that fitted into the category of confusing. It looked like a boat shed from the harbour’s past. I immediately decided that it had been rescued from somewhere nearby, restored and placed on stilts to preserve it from stormy weather. The only surprising feature was that its posts were clearly too high for the job. This should have led to closer inspection where I would have found that the boatshed was made from aluminium planks, even the encrusted sea creatures on the pylons were aluminium. If we had have walked passed it at night, it would have glowed from the inside; Liz Magor clearly liked the role of artist as trickster! Even the name of her installation is a pun; it is called ‘LightShed’ and was installed in 2004.

The Treasure Island mystique of our bike

ride was increased as we passed the ‘Lost Lagoon’ on our left as we headed towards ‘Deadman’s Island’, passing the Royal Vancouver Yacht Club as well. It was here at Brockton Point that we came across our second encounter with the culture of the First Nations people of Vancouver; the first was at the airport’s arrival hall where we were greeted by large carvings of Musqueam male and female figures.

As Australian visitors, it is inevitable that we would have an affinity with a country with an English colonial history like ours. Both Canada and Australia have had significant historical issues coming to terms with the issues raised by the 18th century colonisation of our continents, particularly with recognising the long history of human habitation of our land well before the arrival of Europeans. It has been a slow process in both countries recognising the wrongs of the past and beginning to actively celebrate our first peoples’ history, culture and art as part of our 21st century nationhood. So it was with much interest that we arrived at that section of Stanley Park given over to celebrating the art of the First Peoples of the Vancouver region. The following outline summarises the makeup of the complex local community of the aboriginal people of the Vancouver area.

There are three Local First Nations in Vancouver: the Musqueam, Squamish, and Tsleil-Waututh. These three are part of a larger cultural group called the Coast Salish. The City of Vancouver is on the traditional territories of these three First Nations. They have a special spiritual, cultural, and economic connection to this land that goes back thousands of years. Some of their traditional territories overlap, and they share these lands and resources. (First Peoples: A Guide for Newcomers; City of Vancouver 2014)

The project to gather these 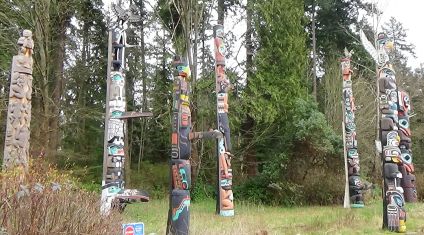 Totem Poles occurred over many years and this installation was finalised in 2008 with the artifacts coming from different areas around the broader region of British Columbia. The City of Vancouver’s website claims that “The nine totem poles at Brockton Point are BC’s most visited tourist attraction.”

The ride along the edge of Stanley Park to the Lionsgate Bridge covers a two and half kilometre stretch of water with views over towards the North shore of Vancouver. There are two stops along this section that are worth taking a breather at. The first is a bronze sculpture that on first sight looks like a copy of the famous Copenhagen icon, the ‘Little Mermaid’. However this woman is no mermaid, she is wearing a wet suit and her mask and snorkel sit beside her as she relaxes on the rock. She is clearly not worried about being vandalised like her original inspiration, the ‘Little Mermaid’ who has suffered defacement and decapitation by political activists for much of her career as an honoured citizen of Copenhagen.

The other stop is a huge

Dragon Head pointing out to sea, vaguely dreaming of her days as the figurehead on the SS Empress of Japan. This was a ship that did long service in the last years of the 19th century carrying passengers and cargo between Vancouver and Asian waters.

From the point under the Lions Gate Bridge it is a three-kilometre ride back towards the city along the shores of English Bay. It is along this stretch of Stanley Park that you encounter one of the best views in Vancouver, the sight of Siwash Rock, hopefully against a background of a setting sun. It is a sea-stack of volcanic rock, left behind while the rest of the sedimentary sandstone eroded away over the millennia. It figures in local Squamish legends but its name is a source of controversy in Vancouver today.

A Vancouver Park Board commissioner wants

to see Siwash Rock renamed, saying the Stanley Park landmark has had its “derogatory” title long enough…”The history of Stanley Park includes acts of dispossession and disrespect directed toward the Indigenous people who inhabited it,” she wrote.

“An ongoing symbol of disrespect is the name ‘Siwash’ Rock.”

Khelsilem, a lecturer at Simon Fraser University, said the landmark is a major point of history and teachings for the Squamish, Musqueam and Tsleil-Waututh people…

Khelsilem said the word Siwash comes from the Chinook jargon, a trade language used at Hudson’s Bay ports between Oregon and Alaska decades ago. It’s a mixture of the Chinook language, English, French, Salish and several other languages.

“In that language, the word for a Native person is Siwash — that’s what you would call a Native person. And the word Siwash is derived from the French word ‘sauvage,’ which translates to ‘savage’ in English,” he said.

From Siwash Rock it is another kilometre along the bay where the weary bike-rider can have a rest at the Ferguson Point Tea-house. It is then the last kilometre to ride before the streets of modern Vancouver appear; on the day we did this ride, we were welcomed back to modern civilization by beautiful Magnolia trees in bloom that lined the streets of this area of Vancouver City. 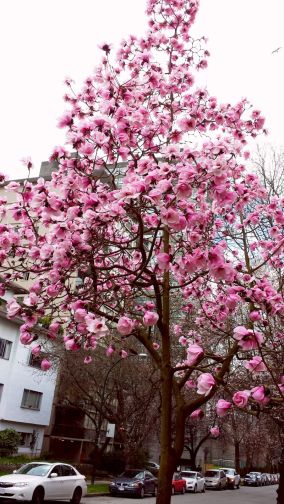