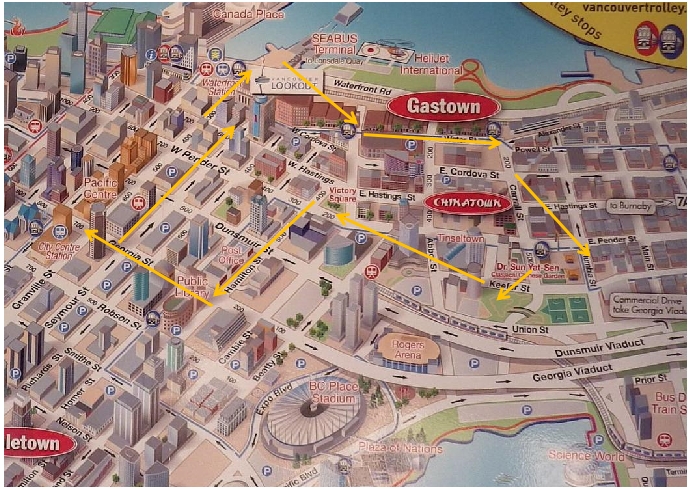 The  image above of our walking trail around Gastown/Chinatown is a logical progression around the sites and byways of these two districts in Vancouver and if you have already had breakfast, its an effective way of ensuring a great morning’s walk. However one of the pleasures of Gastown is its restaurants and cafes so perhaps starting with a great breakfast in Gastown itself is the way to start this day’s 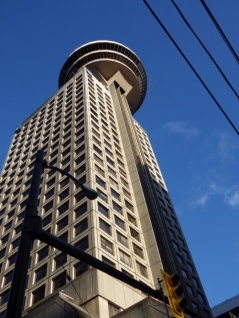 If you want to get an overall sense of Vancouver and its  environs, a visit to the Vancouver Lookout down near the waterfront is another place to start. It gives you a wide view of of Vancouver ‘s setting among the waterways and mountains of British Columbia. It will also give you a bird’s eye visual of the streets of Gastown so you can plan your walk in greater detail. There are also tour guides available up the top of this tower who will escort you around the observation deck and discuss the history 360 degree panoramic view. 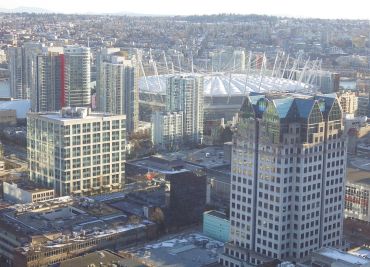 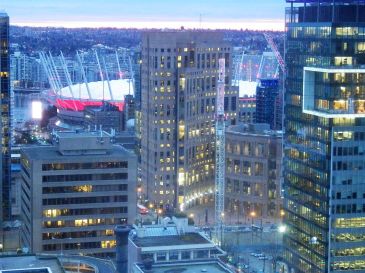 Great views of BC Place, Vancouver’s iconic sports venue looks great at any time of day.

After leaving the Lookout, head down towards the harbour and walk along cobble-stoned Water Street where you will encounter Gastown’s famous Steam Clock. It was a built over an existing steam grate. It steams away and whistles every fifteen minutes and gives the visitors a full symphony on the hour. It was finished in 1977 and signaled the completion of the revitalization of this area. Like all world cities, urban areas devoted to  industries that no longer provide future-proofed jobs for their workers, either fall into decay or are run over by new expressways taking citizens to other places down the economic highway. This is the story of Gastown and today it is a vibrant hub beautifying Vancouver and catering for the many inquisitive visitors to the city. 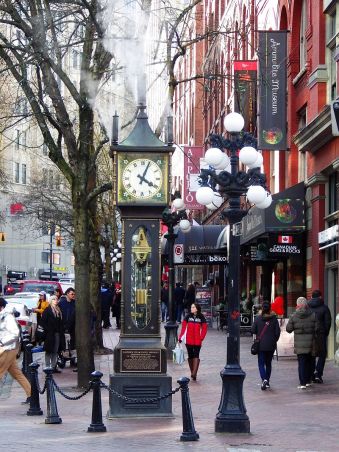 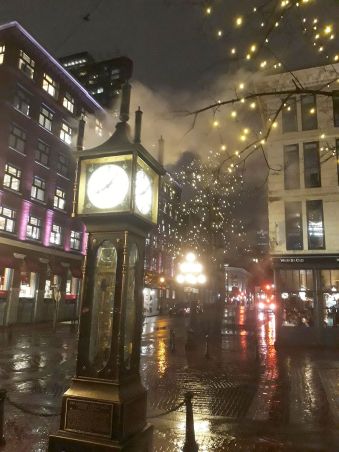 Two casual conversations recently illustrated the curious impact of visiting the steam clock of Gastown. Two unconnected people, when recently asked for their memories of Vancouver , said that the thing they remember most is their visit to the steam clock. My own favourite memory is walking back from dinner in Gastown in the dark and the rain, passing the clock as it puffed away contentedly, no matter the weather or the hour.

Whilst the redevelopment of Gastown is a clear nod to future economic growth by Vancouver fathers, one of the things that the redevelopment of Gastown has down has preserved much of the architecure of previous centuries and promoted memorable aspects of the city’s history . The prime example of this is to be found by continuing down Water street until you arrive at Carrall street and enter the lovely intersection dominated by the Gassy Jack statue.

The statue is a memorial to John Deighton who in his 44 years seems to have encapsulated every aspect of European settlers heading to the New World in the 19th Century experienced. He sailed on a clipper ship out of Hull England and raced around the world before deciding to join the California Gold Rush. Like so many others, this wasn’t successful so he headed north to the English territory that became British Columbia and tried his luck digging for gold there. He eventually settled down as a bar owner beside Vancouver Harbour and settled here for the rest of his short life. His last bar, Deighton House, was built next door to where his statue stands today. He couldn’t stay out of history even after he died; Deighton House was burnt down in the ‘Great Vancouver Fire’ of 1886.  John Deighton was called ‘Gassy Jack’ due his love of telling the tall stories of his life. His statue is a great symbol of life in British Columbia in the 19th century and his story captures so much of the complexity of European arrivals in this Squamish wilderness.

From Gassy Jack’s statue you can take a stroll further along Alexander St and take the ‘lion’ bridge over the railway tracks to CRAB Park at Portside. Because it is a park cut off from what looks like the impenetrable barrier of the railway line, it seems to be a park more used by local joggers and dog walkers and not overly frequented by visitors to the city. However it is a lovely green space that has a back history that is quite moving. For example, the first monument you will encounter is a large granite rock with the following poem engraved in it.

We as Indian people sometimes forget, Where we came from

Our customs, songs, traditional methods, Lost along the way

Caught within the walls of this cement jungle, Indian people are dying

Trying to find the way.

Warriors who once fought for mother earth

Now fight to stay sober and out of jail…

There is also another monument to the area’s tragic past further along the walking path with a view out over the busy port. It reads…

In honor of the spirit of the people murdered in the downtown Eastside.

Many were women and many were native aboriginal women. Many of these cases remain unsolved.

By visiting Crab Park you get an insight into the viewpoint of the First Nation people of Vancouver as well as a beautiful view over the city and the harbour as the image below illustrates. When visiting Crab Park, it is also best to return to Gastown back over the bridge and not try to find a way through the less an attractive railway line along the front of the Port.

From CRAB Park it is an easy walk across to the 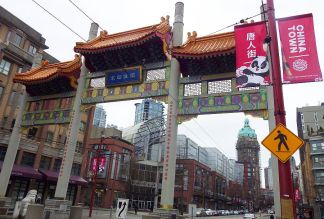 Chinatown district of Vancouver. It is one of the few distinct ‘cultural neighbourhoods’ of the city and is the largest Chinatown in Canada. It was the gold rushes in San Francisco and Australia in the 1850/1860s that drew large numbers of Chinese immigrants away from their home land. Like Gassy Jack, when the California gold rushes started to peter out, Chinese gold seekers came to British Columbia and by 1860 there were 7000 Chinese living in 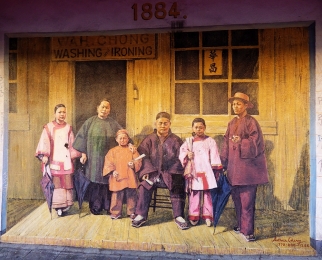 Vancouver. The beginnings of Chinatown was in the early 1890s and its heritage is particularly celebrated in this city’s Chinatown area. There are murals on building walls recalling Chinese merchants and workers of the 19th century and in 2003, an impressive memorial was unveiled to Chinese Canadians on the corner of Columbia and Keefer St. On the pediment of the memorial is the following dedication…

“Rich legacies of Chinese pioneers shining bright as the Sun and Moon.

Why the words of this dedication should remind me of the lyrics of Canada’s famous folk singer, Gordon Lightfoot, I can’t explain. I was taken to a Gordon Lightfoot concert in Sydney in 1974 and since then I have always been a big fan of his, especially his early masterpiece, Canadian Railroad Trilogy. Who needs an excuse to quote some of the lines?

There was a time in this fair land when the railroad did not run
when the wild majestic mountains stood alone against the sun
Long before the white man and long before the wheel
when the green dark forest was too silent to be real
But time has no beginnings and hist’ry has no bounds
as to this verdant country they came from all around
They sailed upon her waterways and they walked the forests tall
built the mines, mills and the factories for the good of us all

Gordon Lightfoot didn’t mention in his song that many of these railroad men were Chinese laborers as the following extract indicates….

Between 1881 and 1884, as many as 17 000 Chinese men came to B.C. to work as labourers on the Canadian Pacific Railway. The Chinese workers worked for $1.00 a day, and from this $1.00 the workers had to still pay for their food and their camping and cooking gear. White workers did not have to pay for these things even though they were paid more money ($1.50-$2.50 per day). As well as being paid less, Chinese workers were given the most back-breaking and dangerous work to do. They cleared and graded the railway’s roadbed. They blasted tunnels through the rock. There were accidents, fires and disasters. Landslides and dynamite blasts killed many. There was no proper medical care and many Chinese workers depended on herbal cures to help them. (www.collectionscanada.gc.ca)

So over the mountains and over the plains 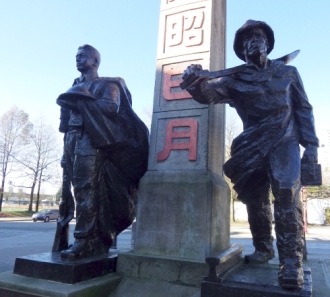 into the muskeg and into the rain
up the St. Lawrence all the way to Gaspe
swingin’ our hammers and drawin’ our pay
Layin’ ’em in and tyin’ ’em down
away to the bunkhouse and into the town
a dollar a day and a place for my head
a drink to the livin’ a toast to the dead.

It is probably not a coincidence that the figure on the right of the Chinese memorial in the square over the road from the Sun Yat-Sen Garden is an 1880s railway worker.

Perhaps the most beautiful part of the walk through Gastown and on to Chinatown is the Classical Chinese Garden named after Sun Yat-Sen (1866-1925), the founding father and the first president of the provisional Chinese Republic in 1912. Naming the garden after Sun Yat-Sen is not arbitrary; as a nationalist leader in the early years of the twentieth century he visited Vancouver three times raising finance for the overthrow of the Ming Dynasty back in China. The garden was designed and completed in 1986 in time for the World Expo in Vancouver. Like all Chinese Gardens, the Feng shui and Taoism theories behind the design are very complex; however, with little knowledge of these theories, we were able to immensely enjoy our walk around this beautiful enclave. 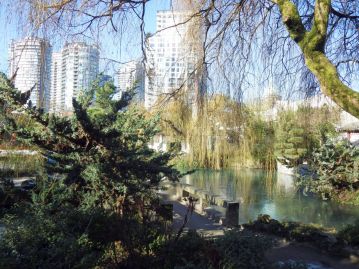 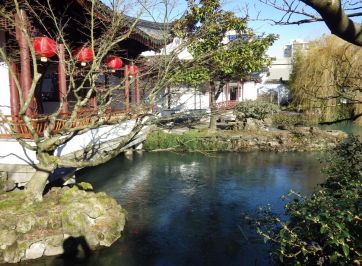 From Sun Yat-Sen Garden, the walk heads back up the hill towards the centre of the city. A pleasant detour is via Andy Livingstone Park named after a former Park Commissioner  who served his city from 1969 – 1988. It is a beautiful combination of walking paths, water features with lots of bird life as well as childrens’ playgrounds. 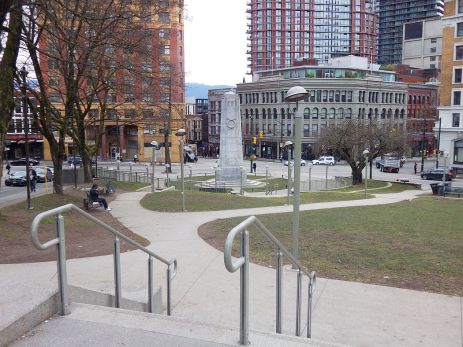 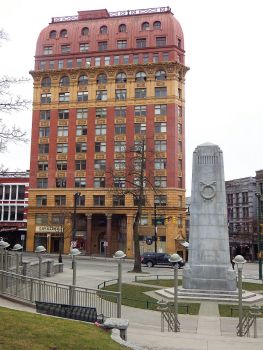 The walk uphill takes in Victory Square where the city holds its memorial services for those who served in the wars of the last century (Note the lamp shades in the shape of army helmets!). In 1886 it was where local firefighters retreated downhill from the fire that destroyed much of the city at the time; the area had still been heavily wooded and the fire continued downhill to consume Gastown. 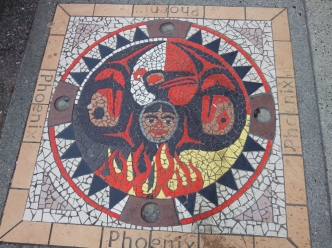 The area was cleared and the City’s courthouse was built here and the vicinity became the financial centre of Vancouver up until World War 1. Around Gastown there are mosaic tile images embedded in the footpaths to illustrate specific local events. The one to the right reminds locals and visitors alike that this area was where the Vancouver fire destroyed all in its path but the city rose, phoenix-like, from the ashes.

There are a number of handsome buildings in this area. The ornate beaux-arts skyscraper over the road from Victory Square is called the ‘Dominion Building’ and was completed in 1910…for a time it was the tallest commercial building in the British Empire.

From here the walker can return to his/her hotel to relax before heading out for an early dinner. Too early to relax? Why not go and spend the afternoon checking out Vancouver’s Art Gallery in the centre of the city. It is a very entertaining gallery and its art pieces challenge the visitor with the key philosophical question, “What is Art?” Even the internal walls ask the same question as can be seen from the images below. The final two pictures were taken of the exterior of the Gallery in February of 2018. 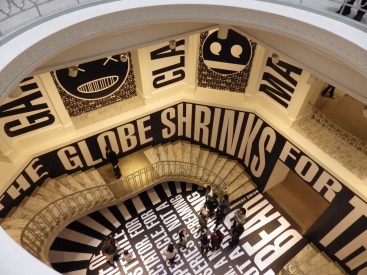 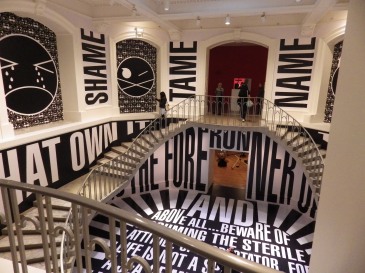 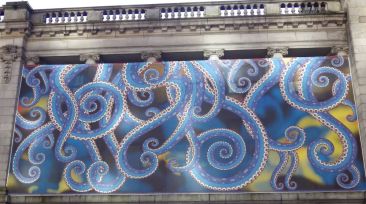 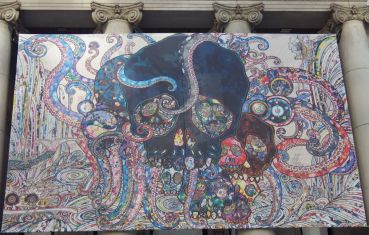