One of the great aspects of catching a ferry out of or coming back into Helsinki is the archipelago of small islands that festoon the path back to the terminals. The most interesting group of islands make up the Suomenlinna Sea Fortress that was built by the Swedish Government over a group of small islands to protect her eastern outpost against an expanding Imperial Russia; Finland was part of the Swedish Empire at the time. It was begun in 1748 but only lasted for 60 years in its role defending the Eastern Territories of the empire. In 1808, despite greater military numbers and an impregnable fortress, the forces on Viapori (the fort’s original name) surrendered to the Russians. Although it didn’t impact on Russia’s control of Finland, four years later in 1812, the Grand Armee of Napoleon invaded Russia and made it to Moscow. They lasted a month before retreating losing over 300,000 soldiers in the process. It was a horrendous time for wars on both sides of the Baltic Sea. 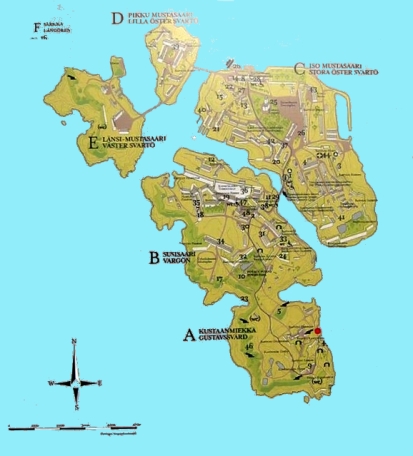 Today, the Sumenlinna Fortress is the number one tourist site in Helsinki and is well worth setting aside a good part of a day to stroll and inspect. It is also clearly a great favourite with locals who we encountered picnicking all around the the islands as well as couples using the sea backdrops for their wedding photos. It is made up of seven islands and most are accessible from the ferry; the first Waterbus stop is the Island of Lonna which can be inspected before continuing on to Suomenlinna or it can be checked out on the way back to Helsinki Market Square. Today this archipelago is home to around 750 people.

The Waterbus that we caught takes visitors to the sheltered wharf in Artillery bay and the views of the island on the way into the bay and back to the mainland are spectacular. If you catch a ferry service to the island, it drops visitors off at the Main Quay on Iso Mustasarri Island (see next map).

As the plaque to the right indicates, the Fortress of Suomenlinna is of world importance and was included on the World Heritage list in 1991. Our walking tour began by heading north across Iso Mustasarri towards Church Park and one of the main landmarks of the island, the Russian Garrison Church. Details of its history were to be found on a noticeboard near the Church.

“The Russian garrison Church was completed in 1854 on the site indicated in the Swedish era plan. With its five cupolas and Byzantine-Russia style, it became a highly conspicuous landmark. When Finland gained independence, all the Church’s Orthodox trappings and stylistic features were removed. The lighthouse in the tower has guided air and sea traffic ever since the 1920s”. 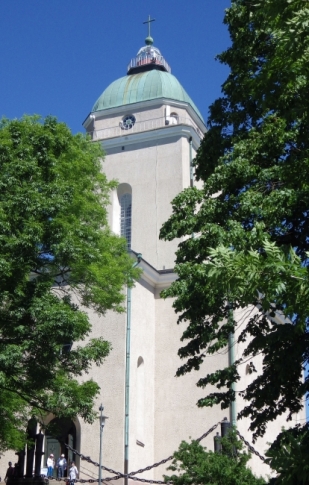 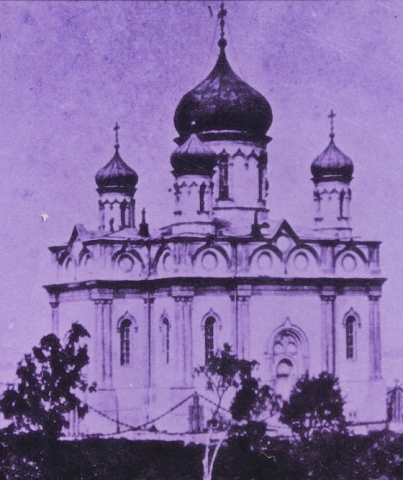 A visit inside the church showed us not only the old photos of the church before its conversion, it also contained a large model of a ‘gun sloop’ used by the Swedes during the war with Russia in the late 18th century. It was a very interesting place surrounded today by a large green space that was well used by locals and the Barnacle Geese that can be found grazing the green spaces of Helinski close to the many waterways. Even though there seemed to be huge numbers of these curious birds wherever we went, there is apparently a decline in their numbers according to local conservationists. 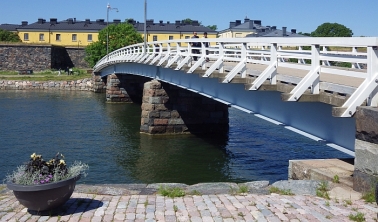 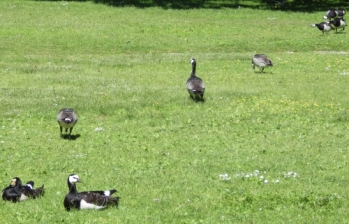 From the Church Square, we walked in the sunshine down to the main quay and then crossed the bridges to the smaller islands of Pikku Mustasaari and Lansi Mustasaari. 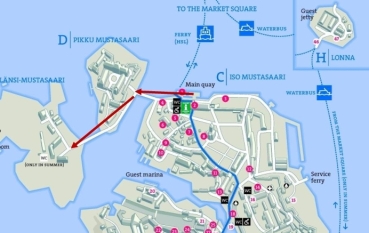 From here we walked back to Artillery Bay by the blue line indicated on the map to the right and began our tour of the two large islands that contained much of the infrastructure of the Suomenlinna Fortress.

It doesn’t matter what part of the European land mass you travel, everywhere you go you will encounter the history of warfare that has bedevilled all countries on this continent for thousands of years. For example, if you travel along the coastline of France, you will regularly encounter fortresses built during the later middle ages designed to protect the region from marauding neighbours. One of the most famous designers of 17/18th century fortresses for Louis XIV of France was Sebastien Vauban who revolutionised the nature of fortress bastions, particularly to delay the effectiveness of the new inventions of gunpowder and canons. He was particularly known for his fortress wall designs with the star points designed to deflect cannon balls. The image below 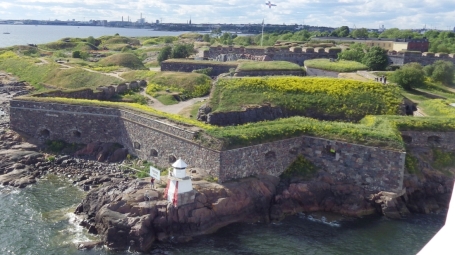 of the wall of Suomenlinna facing out to sea has Vauban written all over it. I was therefore not surprised to find that the Swedish Admiral, Augustin Eherensvard (1710-1772) who supervised the original construction, adapted Vauban’s theories to this fortress on a series of islands in the middle of a bay, rather than the usual coastal vantage point. One of the crucial ways he adapted this island fortress was to build it into the island’s profile, following the natural contours and hopefully keeping the construction of the fortress inconspicuous to roaming enemy fleets. 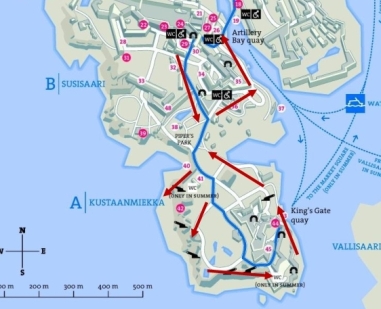 The curious position of Finland being geographically located between two warring parties, the Kingdom of Sweden and the Russian Empire, meant that eventually Suomenlinna would become at different times part of the defence line of three separate nations including the Republic of Finland itself between World War 1 and 2. For all Vauban’s brilliance in designing fortresses, the change in military technology in the 20th century meant his star shaped fortresses were better used as picnic spots rather than national defence facilities. This island fortress declined as a military establishment after World War 2 and became civilian infrastructure from 1973. 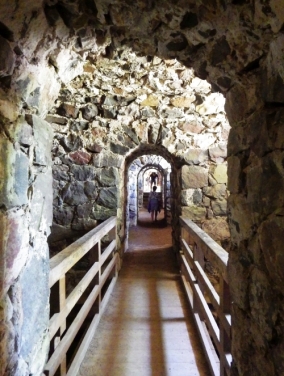 After crossing Artillery Bay, the visitor heads up to the old centre of the Suomenlinna Fortress on Suisisaari Island; it is here that we particularly encounter the legacy of Augustin Eherensvard and his importance to the development of the fortress on these islands. This is where the Grand Courtyard was built in the 1770’s as designed by Eherensvard. You enter through the walls surrounding the courtyard and there are old storage cells here that can be visited before escaping up into the freedom of the main square of the island. The centrepiece of this square is the tomb of Augustin Ehrensvard. He died in 1772 and was temporarily buried elsewhere until this square was developed and he was buried in a monument designed by Gustav III, King of Sweden. The sculpture on top of the tomb was produced by Johan Tobias Sergel. Sadly, Eherensvard was only in his new tomb for seven years before his fortress was surrendered to the Russians. 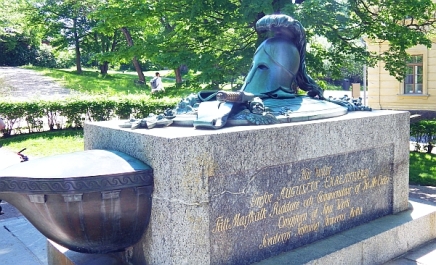 This area of the original Viapori Fortress was the 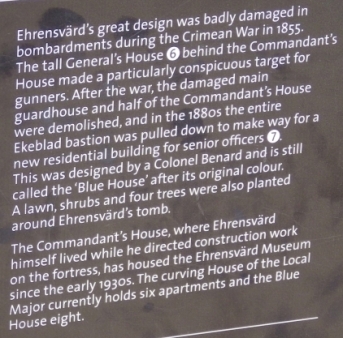 administrative centre of the castle and so was the centre of the defensive action 80 years later when Finland was part of the Russian Empire. The Crimean War had broken out between the Russians and their opponents (British, French, Turks) and a fleet was sent to attack Russian interests in the Baltic, particularly St Petersburg. This fleet shelled the fortress out in Helsinki’s harbour, now with a new name, the Sveaborg, and a number of buildings around the  Grand Square were destroyed. Note the details of this event on the information board placed near the Grand Courtyard.

This square is a very peaceful place to visit today. It is here that you can learn more about the original designer and builder of the fortress in the Eherensvard Museum, to be found in his original Commandant’s house.

The map on the previous page shows the route we took onto the next Island, Kustaanmiekka, today ‘well-connected’ to its neighbour. This last island in the group before open sea is very popular with both tourists and locals given the large numbers of people we encountered on our circuit of this Island. It was June when we visited and the summer colours of the wild flowers were on full display. One of the great features of this island fortress is that so many of the original facilities of the fortress are still present. You can inspect the stone walls, tunnels and storage rooms that support the front line artillery defences of the island. You can inspect the huge canons that were installed after the damage inflicted on the Sveaborg facilities by the Anglo-French fleet; the Swedish Era cannons were no match for the range of the canons used by the attacking ships. 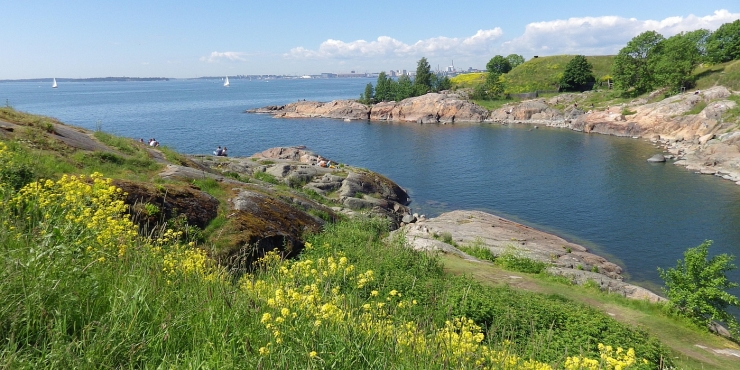 Reaching the tip of the Island the visitor can make a choice of settling down for a drink at Restaurant Walhalla (Valhalla!) or keep walking around the headland to King’s Gate. This restaurant was built into the caponieres of the fortifications in 1952, the year Helsinki hosted the Olympic games. The ‘caponiere’ is a term for the sections behind the walls of the bastion where defenders can prepare for attacks without being exposed to enemy fire. The restaurant explains its name as follows… “The name of the restaurant is inspired by the Walhalla secret society that in the 1780’s conspired against the Swedish king Gustav III. The name of the secret society, Walhalla, was taken as was trendy in those days, from Scandinavian mythology, where it is the place in the after world where heroes and warriors enjoyed an eternal feast.” 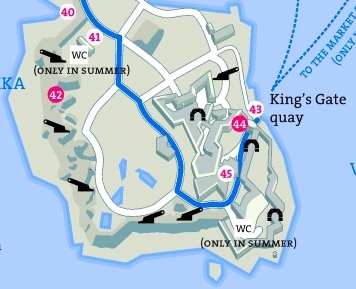 The small map of the Island of Kustaanmiekka on the right indicates the large canon sites around its coastline and #45 indicates the site of ‘Valhalla’ where you can feast away the afternoon. The enterprising tourist will walk onto King’s Gate, a monumental entrance to the island where there is another ferry stop. It is also called the ‘Bent’ Gate and was constructed in 1753-54 from marble and limestone brought in from Sweden, the ruling power in Finland at the time.

Like so many other structures on Suomenlinna, these gates were bombarded during the Crimean War and have since been restored. 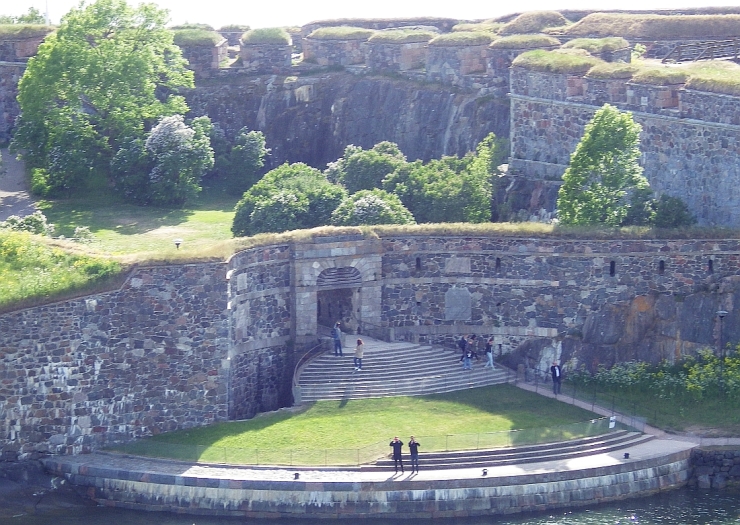 We chose to walk back to the Ferry stop in Artillery Bay to ensure we saw all of the fascinating islands that make up the Suomenlinna Sea Fortress. It was a great way to spend the day and we could see why so many locals made a day of it, spending their time picnicking, enjoying the views and finishing off a great day in Restaurant Walhalla.

Of course the ferry trip back to the Market Place in Helsinki is a gift that keeps on giving. The image below shows the skyline of the city welcoming us back to shore with the Helsinki Cathedral and the President’s palace in full view.