There is a belief among ageing types who grew up in the sixties to believe that they are spending the last twenty years (hopefully) of their lives trying to understand the first twenty. Whether we grew up in San Francisco, Sydney Australia or Prague, Czechoslovakia, we were heavily influenced by the music coming out of California, particularly that of the hippie movement from the late sixties or music inspired by concerns about the war in Vietnam. Our politicians appeared to be stuck in the mindset of the 1950s whereas we were promised in 1967 flowers in our hair by the Monterey Pop Festival and a ‘Summer of Love’ (perhaps even the dawning of the Age of Aquarius whatever that was!) by the thousands of hippies who gathered at the crossroads of Haight and Ashbury Streets in San Francisco. In Australia we were growing increasingly uncomfortable with our friends and relatives being conscripted to fight in Vietnam and die for a cause that we just couldn’t quite see the point of. Young people in Czechoslovakia in 1968 also couldn’t understand why the Russians were still in control of their country and gathered together for what they called the Velvet Revolution, using Scott MacKenzie’s version of ‘San Francisco’ as one of their anthems. Gaining the privilege of visiting Haight/Ashbury district of San Francisco in 2019, if only just for a morning, felt like revisiting key moments of my youth.

In 2019 we stayed in a hotel convenient to Union Square as we were given to believe that this was one of the central sites to visit in San Francisco. A walk to Union Square undermined that idea unless we were only intent on high fashion shopping. Most of Union Square was taken up with fences and scaffolding and the striking Victory Column erected to celebrate the 1848 victory in the Philippines of Commodore Dewey was lost amongst the noise and the traffic.

The second feature of our stroll around this area was the large number of homeless people settling down on the footpaths for the evening. They didn’t appear to be beggars but lost souls sidelined on the sidewalks of the richest country in the world. It was getting late in the day and the temperature was dropping so folk were settling in for the evening. I don’t know why it was the couples settling down for a long cold evening that was the saddest aspect of this situation; surely they were the lucky ones, able to share some warmth on their concrete beds. In one instance, an African American man was putting eye-drops into his companion’s eyes – a fleeting glimpse of an intimate moment of people without a bathroom. If we hadn’t toured out further from the Union Square area on the following day, we would have come away from this city with our anticipations disappointed. Wintertime was approaching but it didn’t look like John Phillips’ promise that “Summertime would be a love-in there” had been fulfilled.

The next day our Hotel kindly organized a van to drop off guests at Fisherman’s Wharf and after visiting this very cheerful area, we hopped on the Red Bus and headed out to visit the rest of San Francisco.

When our bus got to the Haight/Ashbury area, I was asked if I wanted to get off and have a stroll around. I realized that that was exactly what I wanted to do. I suppose the sun was shining and it was a lovely day but I decided that the atmosphere of Haight Street was very different from what we had experienced elsewhere in the city. I hadn’t worn flowers in my hair to get into the spirit of the place (admittedly I have little hair these days!) but I was immediately transported back to the late sixties. The colorful and cheerful nature of the place was infectious and I was reminded of the ideas, the music and the hope for a better world which I recalled from my impressionable late teenage years.

The ‘trouble’ started in Haight/Ashbury on New Years Day 1967 when posters began to be put up for a gathering in Golden Gate Park for a ‘Human Be-iN’, a “gathering of the tribes”. The underground press (and the mainstream) spread the word and America’s youth came to San Francisco at the crossroads of Haight and Ashbury Street. Although the initial festival day was in Winter, the young people stayed on and over the next few months, these impressionable youths explored the big questions of life, looking for answers in music, drugs and free love…with mixed results in the long term.

Being in school in Year 10 on the other side of the world, we didn’t even consider going to Haight/Ashbury but the music we listened to on the radio was all coming out from the west coast of USA…except for the Beatle’s ‘Sgt Peppers’ album which was released a day after the official start of the Summer of Love on June 2, 1967. In Haight Ashbury, unknown bands were making their debut on what became a world stage… Grateful Dead, Jefferson Airplane, and Janis Joplin’s Big Brother and the Holding Company… bands commemorated with mosaics around the district today. 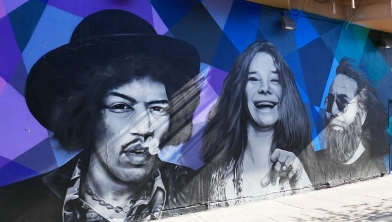 It can be argued that the Summer of Love truly began on June 16, 1967 when the Monterey Festival was opened and the world saw another favourite son leap to fame, Jimi Hendrix. The invitation to wear flowers in our hair was John Phillips advertisement for this festival. Both Jimi Hendrix (1524A Haight St) and Janis Joplin lived for a while in Haight/Ashbury.

One of the God-Fathers of the hippie movement’s experiments with drugs, particularly LSD, was Timothy Leary who was fired from his job at Harvard for unsafe practices involving his experiments with LSD. He was one of the speakers at the Human Be-In at Haight Ashbury. The jury is still out as to how to judge the legacy of a controversial individual such as Leary. Is it by the number of pop songs he/she is mentioned in? Is it by the number of marriages and the number of prison cells he experienced? These may be conventional criteria but to go through five marriages comes across as baffling decision-making. I am not sure if it’s a world record but it has been claimed that during the 60s and 70s he saw the inside of 36 prisons. However, he was also described by President Nixon as “the most dangerous man in America” at one time which I suspect both he and his supporters took as a compliment.

Two other writers who went on to significantly influence the counter-culture movement of the late 60s were Gerome Ragni and James Rado who were among the crowd during the prelude to the Summer of love. They were Timothy Leary fans so he got a mention in the closing song of the ‘Rock Opera’ Hair which made its off-Broadway debut in October 1968.

On our stroll down Haight Street in 2019 we stopped into a bar for a drink. I was arguing with one of my companions about the specific year whose summer had been dubbed the ‘Summer of Love’. Perhaps we were a little confused by our memories of the Four Seasons song, “It was the Summer of 69” so we asked the young lady serving drinks to arbitrate. In reply to the question, “What year was the Summer of Love?” she replied, “Beats me…I’m not from around here!” She had clearly been passing the mural image below every day as she went to work but I suppose we could have looked at it more closely as well!

It sounds like everybody had a good time for the summer months of 1967 except for the civil authorities who had to cope with the influx of 200000 young people. When it was time for these youth to go back to school or college, most of the visitors left to the intense relief of the regular citizens; they could have their streets back. On one of the corners of Haight St today, there is a fashion shop (Love on Haight) that looked like a legacy of 1967. It was a clothing shop which specialized in tie-dye materials and art-work of similar hues. In their window was the whiteboard (see below left) that seemed to be reminding locals of their peace and love ancestry with suggestions on how to make Haight Street a better place. It was interesting to note that they wanted their neighbours to say ‘Hello’ to the tourists but not offer them drugs as the flower children of over fifty years ago had been doing! 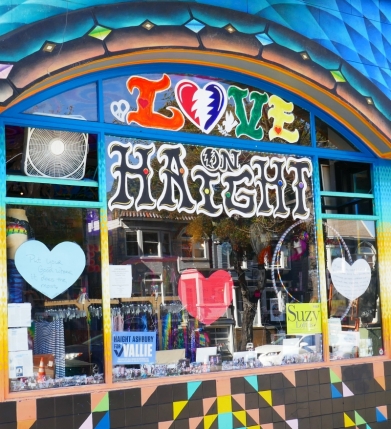 The photo below of the dancer’s legs emerging from a Haight St window is one of the most popular photos of the area taken by visitors today. Like all the individuals who attended the ‘Summer of Love’, what ideas and imagery they took away from the ‘happening’ depended on their many varied tastes and backgrounds that they brought to the festival here in 1967. How affected they were by the kaleidoscope of new ideas that they encountered depended on how they responded to communal living, free love, getting an education or deciding whether to take Timothy Leary’s advice and “turn on, tune in and drop out”. Perhaps the most they took was the liberation of being able to dangle their half-naked legs out the windows of their main street store-front.

If they were individuals who were impressed by the ideas, philosophy and writing of the ‘Beat’ poet Allen Ginsberg (1926-97), perhaps they just took a message away with them of the ‘risks of love’ such as the person who put the heart shaped piece (on the right below) in the shop front window in Haight Street. Allen Ginsberg was one of the ageing beat poets who ‘gathered with the tribes’ at the ‘Human Be-In’ at the start of 1967. What a significant Human bein(g) he was over his 70 years of participation in community dialogue as to the nature of a human life lived well!

Another off-spring of Haight/Ashbury took place a little over two years after the Summer of Love in up-state New York at Max Yasgur’s farm. The fact that over 500000 people turned up to this peaceful event over 3 days (15-18th August 1969), continuing to explore the ideas, issues and consequences of the gatherings at Haight Ashbury, speaks of the power of these ideas at this time. Despite never going to Woodstock, Joni Mitchel wrote the most powerful and enduring song that came out of the event. If I have had a playlist of the songs that I continue to return to over the last fifty years, ‘Woodstock’ would always be high on that list. Perhaps that’s why I enjoyed my visit to Haight/Ashbury so much in 2019.

Next time I go to San Francisco, I will hiring a bike and spending the day riding around Golden Gate Park.