We stayed for a month in a small village called Olanzac in the spring of 2014 in the ‘former’ region of Languedoc, Southern France. It was half an hour from another village called Minerve and Minerve was the first place we took visitors to see who decided to check in on us on their own tours of Europe. Perhaps the reason for it being our first port of call was simply because lots of other folk have recognised it as a beautiful and fascinating place to visit; it has been classified as one the “Les Plus Beaus Villages de France”. Even if you know nothing of the tragic history of this village, you can’t help but be impressed. It is situated on a mountain promontory overlooking canyons formed by the intersection of two rivers, Le Brian and La Cesse, that have a natural wet and dry season. During the dry period, visitors can walk down from the ramparts of the village to the sandy bed of the river and bush walk through the natural arches and caves formed by the rivers’ meanderings. 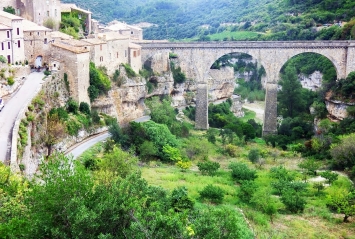 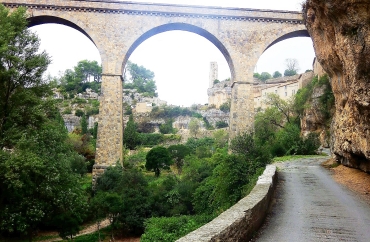 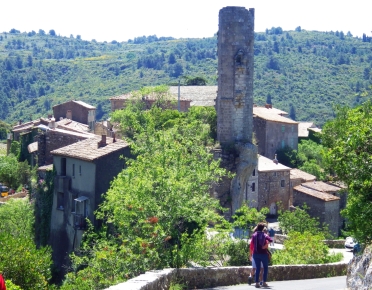 In 2019 we were again in the Carcassonne area and decided we had to visit our old haunts from five years earlier so visiting Minerve had to be on our list. Visitors to Minerve have to park outside the village and walk down the mountain to approach the village entry way. Immediately you are struck by what looks like a forlorn lonely tower that stands beside the main gate to the village. It was clearly at some point in the past a part of a chateau built across the entry to the village. Even for those without an interest in history, a question like, “What was this building and why is there so little of it left standing?” immediately comes to mind. The sign beside it reads… “The Candela (end of XIII) vestige of the Viscount’s castle. At the north end of the two, a drawbridge and trenches were part of the defences of the entrance to the castle. The tower or “the candela” is a corner of the walls, on which three levels of floors are visible. The other remains of the castle were dismantled in the XVIIth and XIXth centuries.” While informative, this sign gives little information about the dark past behind this beautiful spot in the Minervois wine region.

The name of the town is also a hint of its long past. Given its proximity to two rivers, it’s no wonder that the area has been inhabited since pre-historic times. The name ‘Minerve’ is a remnant of when the Romans arrived before the medieval village and castle were constructed. Apparently. it was originally a camp for the 10th Roman Legion. The Church of St Etienne was built over a small temple to the goddess Minerva that had been built by Roman settlers here. The walk from the start of the village takes you down the main street, Rue de La Tour/Rue des Remparts,  past the Church of St Etienne, built in the twelfth century but it’s altar was consecrated around the time of the end of the Roman Empire. The bell tower of the church can be seen overlooking the valley in the image below. 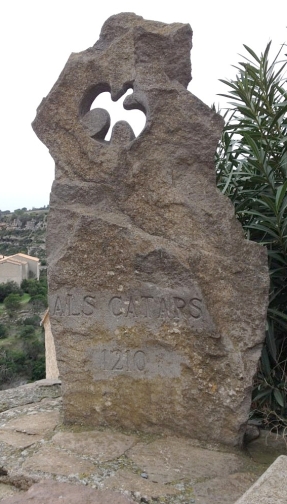 simply says ‘ALS Cathars, 1210’ with the dove of peace cut through the standing stone. Again unless you have come across the story of what happened to the Cathars seeking shelter in this small village at the start of the 13th century, you would have no sense of the meaning of this small monument and the tragedies that played out in the centre of this village so long ago. Minerve found itself caught in the middle of competing forces of history that would reshape the landscape and the future of Southern France. The Cathars were a mystical, heretical sect who were opposed to the teachings, structure and corruption of the Catholic Church of the day. The Pope in Rome decided, probably quite accurately, that if he didn’t stop the continued rise of this group, he would lose much of the Church across large sections of Southern France. He asked the King of France, Phillip II, to run a crusade against the Cathars in order to preserve the church from these heinous heretics. Phillip was too busy elsewhere in his emerging country but sent in the troops, eventually under Simon de Montfort to wipe out the Cathars of Languedoc. He knew by sending in the troops, he would eventually be able to expand the border of his growing empire. Thus the poor citizens of Minerve got caught between these irresistible forces of early medieval history; the demands of the Pope in Rome on one side and the demands of the French monarchy on the other.

The rumblings of the Cathar Crusade started in 1203 but one of Minerve’s close neighbours, Beziers, was the first town to be surrounded and besieged by the French  army in July 2009. The Beziers citizens refused to surrender and the town was taken and anybody who could be captured was slaughtered, Catholics and Cathars alike. Cathars who escaped from Beziers fled to Minerve seeking sanctuary. The Papal army then went on to Carcassonne where it besieged the city and forced it to surrender. The Cathar inhabitants were a bit luckier than those in Beziers, they were only driven from their homes and forced across the river to start building their new town, Bastide St Louis. It was the following year that the new leader of the French army, Simon de Montfort, arrived in July at Minerve.

In 2019 after our stroll along the aptly named, Rue des Martyrs, we headed down into Gorges du Brian. It is down here that you can see the main player in the siege of Minerve, the Trebuchet. Simon de Montfort realised that the geography of Minerve meant that a standard military siege of Minerve was impossible so he quickly decided that he would use siege engines from the tops of the surrounding cliffs. I am not sure who named the particular ‘Trebuchet’ “Bad Neighbour”, but with a certain sense of macabre irony, Bad Neighbour was used to lob stones onto the walls of Minerve and begin the destruction of the town from a distance. Eventually from lack of food and water, Minerve was forced to surrender. For a blood thirsty military commander, Simon De Montfort comes out of the story looking like a reasonable human being; he decided to allow the defending soldiers and citizens to surrender and leave town. However, the Papal Legate with the army, Arnald Amalaricus, Abbot of Citeaux, was late in arrival for the discussion of surrender terms and demanded a change to these conditions. He wanted the citizens of Minerve all put to death. In the end he agreed with Montfort that the defending soldiers and Catholic citizens could be released but the Cathar ‘Perfects’, many of whom had escaped death at Beziers, could not. They were part of the group of 140 people who refused to recant from their Cathar beliefs and were burnt at the stake on the Rue des Martyrs of Minerve. 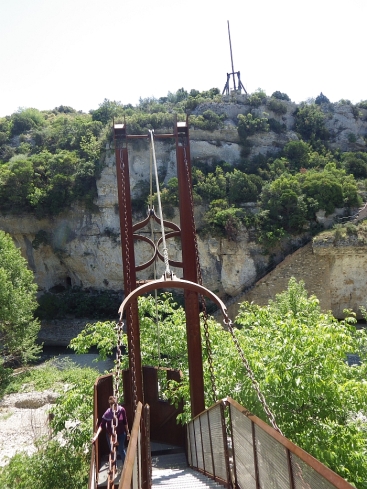 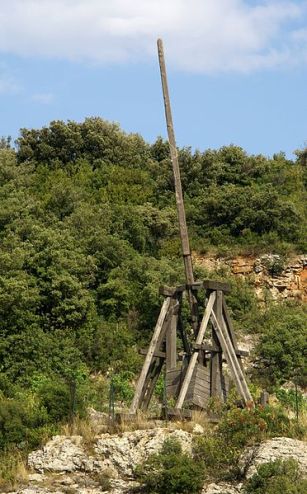 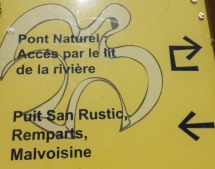 Perhaps it’s best for the visitor to spend much more time in the river beds than up in the memory laden streets of Minerve. At the bottom of the path down to the gorge, the sign on the left gives possible directions. Although it points towards a ‘Natural Bridge’, I would have called this feature of the river walk a cave-tunnel, 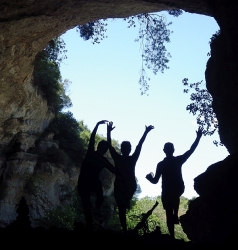 given that it has an entrance at both ends. It is a dark and spectacular walk with the distant exit slowly growing brighter as the walk continues. There is no real need for a torch but if you wanted to have a closer look at the rock ceiling overhead, it would be useful. The opportunity for great photographs (and silly ones) in this area is endless.

From the ‘natural bridge cave-tunnel’, the dedicated walker can continue along La Cesse River and discover at least three more ‘Pont-Naturals’, although of smaller size than the original, formed by the river over the eons of rainy seasons. There is always a time to call a halt to such a walk, particularly if its lunch time. The visitor simply turns around and heads back along the gorge and turns left before the original ‘Natural Bridge’ on a path that will lead you to the road leading up to the bridge across the gorge that takes you back to the village of Minerve. The photo below is a cross section photo of Minerve taken from this comparatively recent bridge, showing both the tower at the entrance to the village and the bell tower of the ancient Church of St Etienne.

Finish off a great morning by having lunch in Minerve. We chose Relais Chantovent as we couldn’t resist the views it provided over the gorge; the perimeter of the restaurant sits right on the edge of the cliff. The food is fantastic and it never crossed my mind that if we were sitting here in July 1210, we would have had a close up view of the boulders being tossed at us from the other side of the gorge.

APPENDIX 1: The Song of the Cathar Wars (written originally in Occitan).

Now in Summertime, my lords, when winter was past
and fine days and hot weather had returned,
the Count de Montfort prepared for his expedition
against Minerve, which lies towards to coast.
He laid siege to the place as had planned,
and set up his catapults, making Bad Neighbour
the queen and lady of all his siege engines.
He smashed openings in the high walls and in the stone-built hall,
mortared with sand and lime;
many a good penny they had cost and many a masmudina.
If the King of Morocco and his Saracens
had sat down all around the place, by St Catherine,
they could have done no damage worth an Anjou halfpenny,
but against the host of Christ, the judge of all,
no high rocks, no steepness may avail, no mountain fortress hold out.

The castle of Minerve sits not on a plain,
But stands, as God is my witness, on a high spur of rock.
There is a no stronger fortress this side of the Spanish passes,
Except Cabaret and Termes at the head of Cerdagne.
William, Lord of Minerve, rested and bathed,
Shut up in the castle with his whole troop.
Our French men and those from Champaigne,
From Maine, and Anjou and Brittany,
From Lorraine, and Frisia and Germany
Drove them all out by force before the grain ripened.
And there they burned alive many heretics, sons of bitches,
Frantic men and crazed women who shrieked among the flames.
Not the value of chestnut was left to the survivors.
Afterwards, the bodies were were thrown out and mud shovelled over them
So that no stench from these foul things
Should bother our foreign forces.

The lack of empathy for the citizens and guests of Minerve revealed in the second stanza of this 13th century account of the siege of Minerve is startling.

And there they burned alive many heretics, sons of bitches,
Frantic men and crazed women who shrieked among the flames…
So that no stench from these foul things
Should bother our foreign forces.

Let’s hope that journalists’ reports about 21st century religious wars show more compassion for both sides of the engagement than our early medieval, poetic reporter does in this piece.