For the first two days of our time in the Vezere Valley, our attention was on the town of Les Eyzies de Tayac. Our next destination, the must-see site on our trip, was the town of Montignac, a further 24 km up the Valley. It is outside this town that the Lascaux caves were discovered in 1940. Astonishing polychrome images of the valley’s paleolithic fauna, painted on the walls of this lost cave, amazed the world. As a result, huge numbers of tourists have come to see these masterpieces by generations of artists who lived 17000 Years ago. The story of the discovery of the caves is a ‘boys-own’ adventure of 18 year old Marcel Rividay, rescuing his dog who had fallen down a hole. In rescuing the dog, he found a cave system that had been hidden from the world due to an avalanche over the cave entry since the stone age. It was in 1948 that the caves were opened to the public and 15 years later that they were closed again due to the deterioration of the paintings by carbon dioxide, heat, humidity and other contaminants brought by visitors. When we visited the area, we were able to visit Lascaux II, an exact replica of some sections of the original caves. 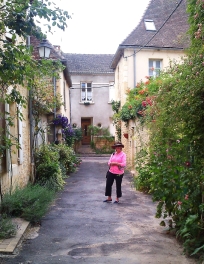 To get to the Lascaux Caves, you have to go via Montignac, an old town itself by most standards that still has parts of its castle from the 11th century. While the beautiful stone bridge crossing the Vezere River in the middle of town looks ancient, it was only built around the time when Captain Cook was arriving on the east Coast of Australia in 1770. On the day we visited, we found it a delightful place as we wandered around the picturesque streets and had lunch overlooking the river.

It is a curious thing for a travel blog to be promoting a destination when in fact no tourists can actually enter the centre of the attraction. It is also a possibility that due to failed attempts to clear the original Lascaux cave of fungi and moulds, it will never be open again to the general public. However such is the interest in the cave, a number of alternatives have been developed over the years. The first is what we were able to visit in 2011, Lascaux II, which is a large block house accommodating a close to exact replica of the first two sections of the original cave; the Hall of the Bulls and the Axial or Painted Cave. There is now a Lascaux III which is an exact reproduction of two other sections of Lascaux, the Nave and the Shaft, in multimedia formats. This version of Lascaux is portable and has travelled around the world since 2012 sharing Lascaux’s amazing prehistoric paintings. Finally, in 2016, a Museum was built outside Montignac which contains new copies of all the painted areas of the cave. So while the original caves are no longer accessible, the world can still gaze upon and ponder the amazing talent of the Magdalenian artists and the many mysteries of their art works.

The rest of this blog will simply attempt to give the reader a taste of the beautiful and ancient images that the Lascaux Caves contain.

The Hall of Bulls

The Hall of the Bulls is the first cavern in the complex of the Lascaux system. It is generally held to be the most spectacular as it contains huge paintings of ancient animals, some up to 5 metres in dimension. The visitor is greeted with a huge stretch of ceiling covered in aurochs, horses and reindeers, all appear to be stampeding across the valley floor. Unlike the some of the caves further down the valley at Les Eyzies, there are no mammoth drawings in this cave but there is one extinct species that is well recorded here. The auroch is an extinct species of large wild cattle and is the ancestor of modern domestic cattle. It is one animal that was only known from the archaeological record before 1940, now we have huge paintings of the auroch. When alive it must have been a frightening sight charging down the Vezere Valley.

These paintings of the local animals are realistically painted with the artist using not only great draftsmanship and colours (red, yellow and black pigments obtained from the rocks of the area) but also using the shape of the cave walls to give perspective to their images. Along with the clearly identifiable images of the local fauna, every now and then there appears in the galleries unusual  figures that seem out of place amongst the horses and the aurochs. In the above image there is an ‘animal’ on the left-hand side with what looks like two straight horns coming out of out of its forehead. It has been dubbed the ‘Unicorn’ by archaeologists.

As can be seen by the map of the cave, there are two off-shoots from the Hall of Bulls, one taking cave visitors forward to the Axial Cave which finishes in a dead-end. The other turn takes visitors further into the cave system to other galleries full of delightful images.

It is no surprise that the Axial Gallery became known as the Painted Gallery due to the large number of images, all with stories to tell and puzzles to challenge the viewer. There are animals everywhere, flowing across ceiling and down the walls. Paintings on the cave roof required scaffolding to complete and the artists left evidence of these structures as well as curious linear signs.

The section of caved wall on the left shows running horses and what looks like an upside down cow. Archaeologists believe it is in fact a

falling cow; one of the ‘mass-hunting’ practices of the people of the valley was to co-operate in driving animals off the cliff edges in the district, resulting in large amounts of food for everyone for days. There is another example of this hunting process in action with the black falling cow from elsewhere in the Axial Cavern, its flailing legs clearly captured by the artist.

The next image from this gallery shows another local animal that we have noticed before on our journey, the ibex (below, left). There are two, line drawings here of the Ibex with a ‘lattice’ drawing between them. The puzzle here is to decide whether the ‘lattice’ is a very early ‘window’ that the artist was contemplating for his cave, a signature he/she is working on or just a piece of whimsy from a creative artist. Perhaps it was just another part of the ‘hunting magic’ that is one theory about the motivations behind the artist hunters who used Lascaux Cave over the period around 17000 to 1500 BCE.

The most majestic art work in the cave is the ‘Great Black Bull’ which is over five metres long. Archaeologists have found many painting techniques used in the Lascaux cave and the method used with this bull is that pulverised pigment has been sprayed onto the wall with a tube made from wood or bone.

This cavern has a practical title as it connects the Hall of the Bulls with the Apse and the Nave, two names taken from Cathedrals; perhaps the early discoverers believed that they were dealing with a spiritual place for the prehistoric artists of the region. The title ‘Passageway’ may be practical but it didn’t stop it being used for painting. There are over 380 figures on the walls of this 17 metre gallery, the ‘Bearded Horse’ being my favourite. 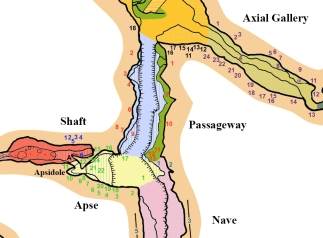 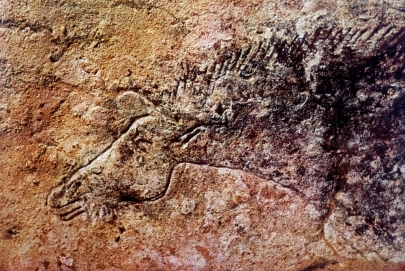 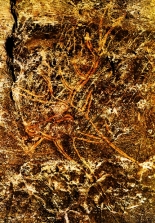 The Apse is one of the smaller galleries in the Lascaux Cave system but it is a heavily used area containing over a 1000 figures, the majority of these being geometric signs. One of the great art pieces of this gallery is the engraved deer shown here; the colouring of the outline has been enhanced in this image.

This off shoot of the Lascaux system is accessed by a hole in the floor of the Apse that leads down into a cavern below called the ‘Great Fissure’, the deepest part of the cave. It only contains eight figures of animals and some geometric signs. However one of the images in the Shaft is the most puzzling in the whole of Lascaux Cave and its interpretation is still being argued about today. It appears to depict an encounter between a large bison and a human. The bison has been clearly speared by the man and appears to be disembowelled. The man with the bird-like head does not appear to be in good shape either as a result of the encounter. Lying next to the apparently dead man is a bird on the end of stick. Perhaps it just depicts a hunting accident but the image appears to be asking viewers to discuss the elements of the painting.

The Nave is a cavern also leading off from the Apse stretching 18 metres in length. My favourite image in the Nave is that of stags swimming in a river. Its place in this cavern can be seen in the image above, high on the wall on the right and into the ceiling space. However most people claim the Black Cow as the most beautiful scene in the cavern which can be seen on the left of the cavern in the image above.

While I think the Swimming Stags would not look out of place in one of the great art galleries of the world, the Black Cow as a panel has many interesting features. The female Auroch (apparently they have thinner horns) has been painted over the top of a train of horses. There are also signs on the belly of the Black Cow that a later artist has added an extra panel of colour. These details bear on the question of the purpose of the Lascaux paintings. If they were ‘art for art’ sake, surely successive artists wouldn’t paint over the works of their elders or forebears. If they were part of some magical process that was meant to control the animals they were hunting, later artists would probably decide that it was time for new magic and paint over the horses. Perhaps horses were out of season and auroch cows were available in the valley. Perhaps the cow was adjusted because the hunters wanted this season’s local cows to be bigger and fatter.

The other feature of the Black Cow wall that is worth noting is that coloured, ‘checked’ geometric figures are scattered along underneath it. If these were the signature of the artist, only one would be necessary, not five. Are they pre-historic graffiti?

On the map of the cave above, this chamber is indicated in brown and has some stalagmite encrustation. It is about 20 metres long and the wall surfaces are crumbly, presumably explaining why there are no paintings in this passage.

The Chamber of Felines

This chamber is the last accessible cavern in Lascaux and differs from other galleries in that it is narrow and slopes upward. Visitors must crouch down and movement is difficult. There are 80 figures in this cave, 51 are engravings of horses, bison, ibex and stags. There are more pictures of cats in this chamber than elsewhere, the image here being a drawing of one of the feline engravings.

As usual, many thanks to Don at https://www.donsmaps.com/ for the use of his wonderful resources.