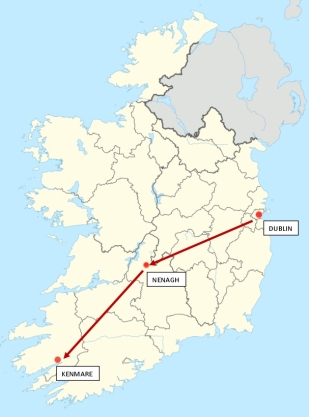 After some exciting days exploring Dublin, our family party of four couples picked up hired cars and began the journey to Kenmare in County Kerry. Part of the reasoning behind our journey to Ireland was to get a sense of the country that our forefathers had left in the 19th century and made a home in New South Wales, Australia. We had decided to go via Nenagh in County Tipperary as this was where our Great Great Grandfather on our paternal side had come from. His name was Michael Fogarty and he had sailed from Cork Harbour on the 21st September, 1828. He was around 30 years old, he could read and write, was a ‘Papist’, a widow and his occupation was a ‘plougher and reaper’. He lived in Burgess, approximately 6 miles from Nenagh and was apparently sentenced to life in the colony of New South Wales for the crime of ‘coining’. He was sentenced in County Clare in March 1828 and so must have spent 7 months locked up before sailing from Ireland. How a ‘plougher and reaper’ became a coiner was a question that puzzled generations of family Genealogists until it was realised that ‘coining’ was a mistranslation of ‘Kearning’, the crime of cutting the fetlocks of English cattle and thus making them useless for sale. Michael Fogarty didn’t pass on any stories of his time around Nenagh but we could only imagine the food situation in Ireland was dire in the years before the official start of the ‘Great Hunger’ in the 1840s. What drove him to take action against local cattle-owning landowners has been lost in history. So we arrived in Nenagh over 200 years after our ancestor was born in this area to get a sense of where our DNA had come from.

Nenagh was an important stopping place for the four brothers in this company of travellers but given there were four wives with us not particularly interested in our family heritage, it was only a lunch stop with some time for a quick walk around Nenagh. We weren’t able to park in the main street of Nenagh, but we did find a park near the Nenagh Courthouse which was a worrying sign given our ancestral history in the district. It was built in 1843, 15 years after Michael Fogarty had been shipped out of Nenagh. Also it no longer dispensed justice to erring farmers of the area, it houses the local council. 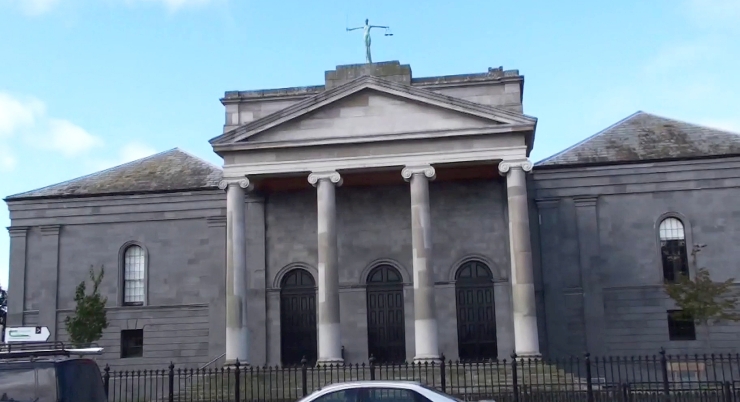 Nearby to the Courthouse is a curious building at the end of an impressive driveway which houses part of the Nenagh Heritage Centre The buildings on the site were built between 1840-42 as the Governor’s House and  the gatehouse of a large gaol which functioned until 1887. Seventeen Tipperary men were executed here over that period. In contrast to its initial usage, it was then given over to the Sisters of Mercy for educational purposes. One of the obvious remnants of the Sisters is a sign on the wall of the Driveway.

Today this centre has many functions, one of which of which is as a Genealogy Centre where if we had had the time, we could have looked for more info about our local ancestor. Alas we were on a tight timeline and we had the local church to check out. Over the road was the Catholic Church of Saint Mary of the Rosary Church, a beautiful late 19th century building dedicated in 1896. It is a curious story of how such an impressive and ornate church could be built in a poor market town in Tipperary in the second half of the 19th century. The funds were sourced from the Tipperary diaspora in the USA; priests from the diocese were sent to America to raise funds for the project in the late 1850s but generosity to the old country dried up with the coming of the American civil war in the 1860s.

The church of Saint Mary of the Rosary is a gorgeous buildind, the south door in the image to the left gives one example of its ornate stone-work that is continued throughout the building.

From this church it was time for a stroll down town to the most significant building in town and the one that speaks of the town’s and Ireland’s long history…Nenagh Castle.

The Vikings have had a significant impact on the history of Ireland and the DNA of its citizens. These raiders from Denmark pillaged the west coast of Ireland in the 9th century and then returned like bad pennies in the form of remodelled versions of the earlier tormentors; it was the Normans, descendants of the Vikings, who were invited in to assist a local lord in the 13th century. After having quelled England after 1066, the Normans under Henry II  invaded Ireland and took over much of the arable land. The map below (thank you Irelandstory.com) shows the areas taken over by the Norman knights including the territory around Nenagh and down to Adare which we would visit some days after our time in Nenagh.

The famous royal villain in the Robin Hood story, King John of England, made a grant of the land around Nenagh to Theobald, the eldest son of Hervey Walter of Lancashire. Theobald was subsequently appointed “Chief Butler of Ireland”. Curiously, the role of Chief Butler meant that if and when King John visited Ireland, it was Theobald’s job to ensure that plenty of food and drink were available to the King and his party when he visited. The Norman castle in Nenagh was begun around 1200 and finished in 1220 by the ‘Butler’s’ son. The keep is over 30 metres high and has a diameter of 16 metres. Significant parts of the castle have disappeared over the years but today it is a tourist attraction that illustrates how the Irish have absorbed past invaders and survived for descendants to tell the story. 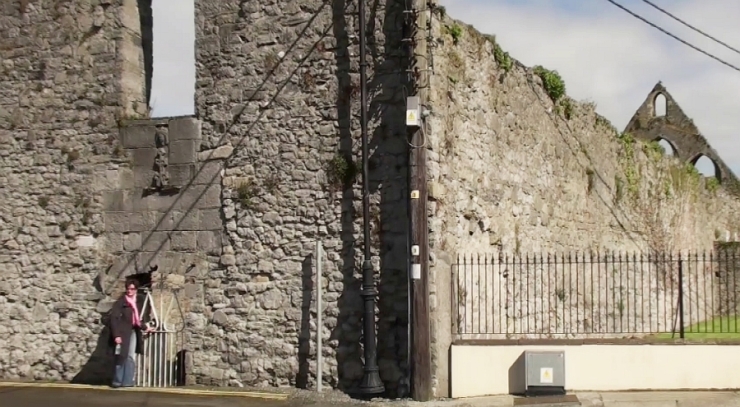 From the Castle it was a block or two’s stroll through downtown Nenagh to the next major historical site of the town, the ruins of the Franciscan Friary. As well as castles, the other gift that the invading Normans brought to Ireland and Nenagh were religious orders; in this case, the Franciscan friars. The Friary was built around 1250 and survived for about 600 years. The friary and its monks suffered the

usual depredations resulting from the changes in the religious affiliations of their English overlords (eg. Elizabeth I, Oliver Cromwell). It was at one time the richest religious houses in Ireland. The last Franciscan in Nenagh died in 1817. There is a plaque on the ruins of the Friary shown below that gives further details of this still surviving structure, memorialising Nenagh’s long history. 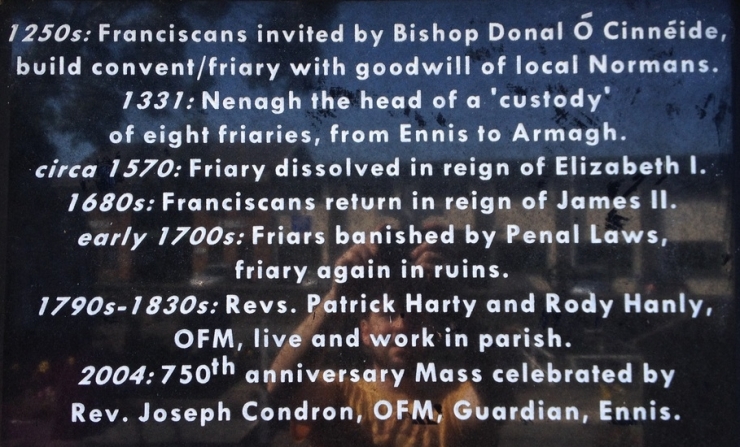 After exploring the Friary it was definitely time to hit the road again to make the trip to Kenmare before the light faded on the day.

An interesting photo of Nenagh from 1910.

As mentioned earlier in this article, the reason for stopping off in Nenagh on the way to the Ring of Kerry was to explore the birthplace of our great, great grandfather, Michael Fogarty. It was confirmed for us that we were in the right town when a concrete truck drove past with the firm’s name shouting out to us…’Fogarty Concrete’!

Five generations living in our Great Southern Land certainly had taken away any sense of the ‘Irishness’ of our family; we had no relatives we could visit on our trip to Nenagh and any other close Irish contacts that kept us in touch with contemporary Ireland. Even though one of our maternal great grandfathers brought his fiddle with him from Ireland, the following generations didn’t use it for singing the songs of the homeland or teach the offspring any Irish dances.

However, if I was in a gathering back home with a group of immigrants to Australia and they asked me about my family background, I would say I was a descendant of the Irish diaspora. There is no escaping that my genealogy is pure Irish; my father’s line came from Nenagh in Tipperary and my mother’s line came from further north in County Longford. What it means for me as an Australian from Irish forebears is that I have a vague pride in my Irish heritage and am happily attached to a sense that there is another country in the world who has passed on to me a significant part of my cultural identity.

However that is not all my heritage has passed on to me. The development of DNA testing and associated usage of that work means we have discovered that as an Irish descendant of DNA-bearing folk from the old kingdom of Connacht in Ireland, myself and my relatives might be prone to higher rates of cystic fibrosis, celiac disease, and galactosemia. I can confirm Celiac disease has reared its ugly head in the family

I have always assumed that my Irish heritage meant that my ancestors were Celtic, Catholic and fiercely independent with a large dash of concern about English colonialism over the last few centuries. But research information about the DNA of the Irish people has changed my vague view of my Irish heritage. Unlike historical records and archaeological finds, studies of Irish DNA has shown that the basic Irish genetic heritage goes back 10000 years to the end of the last Ice Age. Being on the edge of Europe, Ireland was the end point of the movement of Neolithic farmers whose families walked from Central Europe and the Russian steppes to eventually settle in ice free Ireland.

One of the historical puzzles of Irish folk clustered on the west coast of Ireland was that of the “Black Irish”. To explain why there were significant numbers of olive-skinned native Irish families there, the main explanation that developed was that they were descendants of Spanish sailors whose ships were wrecked on the coast of

Ireland at the end of the 16th century as part of the escaping Spanish Armada. DNA research has shown that what were called ‘Black Irish’ traits go way back to Neolithic times and came with human travellers that crossed to Ireland after the last ice-age. This research has also discovered that there is a broad similarity between Irish from the West Coast of Ireland and the Basque county in Northern Spain. Apparently the ancestors of the rebellious Basques of today settled down near the Pyrenees and the others kept trekking on to Ireland.

A DNA map of Ireland has been produced by researchers from the Royal College of Surgeons in Dublin that shows the genetic signatures of Ireland are clustered very strongly within the four ancient kingdoms of Connacht, Leinster, Munster and Ulster. This illustrates that the basic Irish DNA goes back to the Neolithic age, particularly on the west coast in Connacht. Waves of arrivals of Vikings from Scandinavia, Normans from England and the Cromwellian English arrivals in the 17th century have had an impact on the genealogical makeup of those from Ulster and Leinster. (Further Research? https://www.nature.com/articles/s41598-017-17124-4)

Research into the genetic heritage of the Irish has given me a broader idea of what it means to be linked into the Irish story. For one thing, when I visited the Burren and the Aran Islands in County Clare, I could look at the Ring forts and Wedge tombs of the Neolithic people of the area and know that my DNA linked me to these ancient ancestors. When I get to visit the Basque country in Spain one day, there will hopefully be a sense of catching up with relatives that I have been separated from for thousands of years.