In one piece of promotional advertising for this southern German River town, I read that it was one of the seven most beautiful cities in the world! This is a big call to live up to, particularly if you ask difficult questions about the criteria involved in such a judgement. For example, you could ask ,

Passau’s population is 50000 so I am wondering if the other six most beautiful cities that made the list include cities like New York, Paris and London which have populations of over a million citizens.

When considering the ‘beauty’ of a city, you need some clear guidelines. Here are some suggestions.

When I decided to apply these guidelines to Passau to check its self-rating, I decided it passed the first one,  location, with flying colours. Its old centre is built at the confluence of not just two rivers, which would be unusual, but of three. The old town looks like the prow of a boat forging ahead down stream as it navigates its way through Germany and  Austria. Its major river is the Danube which is supported by two other important rivers, the Ilz from the south and the Inn from the north. Passau also has the backdrop of a minor mountain with its own castle (check image at start of article) from which the visitor can gaze down upon the convergence of these three rivers and note that they are colour coded; green, gray and the poorly named Blue (Brown!) Danube. The only ill-mannered comment an Australian might make is that it is no Sydney Harbour.

Passau certainly has an extensive history. There is evidence that the Celts settled here 2500 years ago and its location at the junction of three rivers ensured that the Romans claimed the spot to ensure control of this reach of the Danube River. One distinctive aspect of Passau’s long history is that it fell into the hands of Prince/Bishops of the Catholic Church who ruled a large area around Passau for hundreds of years from the 10th century. Great wealth from passing traders, particularly from salt (white gold!) meant that these clerical rulers became very wealthy.

Any German town or city in the twentieth century couldn’t avoid being touched by the rise of National Socialism in the 1930s and the many side effects of War with your neighbours from 1938 to 1945. However Passau has its own specific link with that period that its citizens have mixed feelings about. Their town was the early childhood home of Adolph Hitler from 1889 to 1894. There is a curious story about Hitler’s childhood in Passau that has emerged in the new millenium.

“Everyone in Passau knew the story. Some of the other stories told about him were that he never learned to swim and needed glasses,” she wrote. “In 1894, while playing tag with a group of other children, the way many children do in Passau to this day, Adolf fell into the river. The current was very strong and the water ice cold, flowing as it did straight from the mountains. Luckily for young Adolf, the son of the owner of the house where he lived was able to pull him out in time and so saved his life.”

Hitler told his Nazi generals that he used to play cowboys and Indians on the banks of the river but never admitted to falling in the water. (Amy Willis 2002)

The web of history is made from delicate skeins; what would have been the result for Europe if the young Adolf hadn’t been saved by his neighbour?

Another link to the major events of the 1930’s in Germany was brought about by Passau’s geographical location on the Danube with its proximity to the Austrian border. When the Nazis were wooing their Austrian neighbours to the idea of joining with their German-speaking neighbours in a combined German Reich in 1933, they invited Austrians to vote in the German elections. Huge numbers were bused in to Passau to vote. It was only five years later that Hitler began his triumphal procession through Austria to celebrate the ‘merger’ of the two countries.

Unlike so many other Bavarian cities and towns, Passau’s location has meant that it wasn’t significant enough to the Western allies to suffer the extensive damage that other German cities suffered as a result of the wars of the twentieth century. Unlike cities in northern Germany, it didn’t have to rebuild from scratch its historic centre after 1945. However much of the inner city did burn down in the 17th century and it was rebuilt in an Italian Baroque style chosen by the wealthy Prince-Bishop of the time. Apparently he decided the walls should extend beyond the roof-line so the winter snow would be stopped before it fell on innocent passer-byes.

My third criteria for a beautiful city is its architecture and street-scape and there is no doubt that Passau is a beautiful place to stroll around. The old centre is surrounded by water on three sides so its old streets and narrow alley ways are a delight to wander through; on our visit to Passau, we started from the Danube, crossed to the other side of the city in five minutes to the Inn river 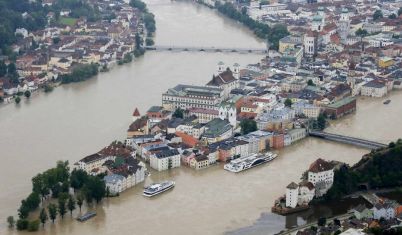 and then plunged back into the maze of streets. The predictable disadvantage of Passau’s location is that when the rivers are in flood, damage from water inundation from three sides is particularly tragic. In 2013, the city suffered the worst flood in 500 years where the citizens were cut off, with the river lapping over their high bridges. The National news outlet, Spiegel described the crisis as follows…

The streets of Passau have been transformed into canals, full of soldiers evacuating pensioners in rubber boats. …Many bizarre scenes are playing out in the “City of Three Rivers,” which is usually so proud of its location right where the Danube, Inn and Ilz rivers meet. Streetlights are bobbing on the water surface like buoys and an abandoned, half-submerged car is blinking furiously, its alarm system triggered by its movement in the water.

The image to right shows the 2013 flood was above the door of the Town Hall but not the highest flood in the history of Passau.

The centre of town and the most significant piece of architecture in Passau is St Stephens Basilica. Curiously two of the major cities down stream, Vienna and Budapest, have cathedrals also named after St Stephen. St Stephen’s Passau is named after the first Christian martyr who was stoned to death outside a gate in Jerusalem while the adolescent St Paul held the cloaks of the outraged Pharisees. One of the themes of tour guides in Passau and in the

neighbouring Central European cities was their unease with the dark history that they have inherited from earlier generations. Most we met were determined both to acknowledge and learn from their difficult past. In the case of St Stephen’s in Passau, this is beautifully done by the sculpture that sits right at the front of the church behind the altar. It presents a series of individuals caught in the process of gathering around an individual and participating in the stoning of the innocent outsider. St Stephen was an outsider in that he was a follower of Jesus of Nazareth, something unacceptable to the dominant religion of that city and so this outsider must be stoned for his sins against cultural orthodoxy. The link with what happened to the Jews in Germany in the first half of the twentieth century is explicitly made by the stance of the individuals in this sculpture; there is even a Pauline figure holding the cloaks of the perpetrators throwing rocks at the Jewish stranger/neighbour.

My fourth criteria for beautiful cities asks whether the contender has an artistic and cultural life exemplified by its galleries and museums. On our short visit to Passau, we certainly weren’t tempted to visit any significant galleries to art or local culture; the closest we came was to slowly bypass the Museum of Glass. We were tempted to visit the castle on the hill overlooking the three rivers but only for the magnificent views of the rivers and the rolling green hills that surrounded the modern parts of Passau.

Given that we came by Riverboat, we were in no situation to comment on the accessibility to efficient local transport facilities.

In attempting to come to a judgement based on my five ‘beautiful’ criteria, I would have to cast doubt on the locals’ claim that Passau was one of the seven most beautiful cities in the world. Apart from making rash claims about their world urban standing, I would never question anyone’s claim that Passau was indeed a beautiful city. We thoroughly enjoyed our trip to this small river city in southern Germany, particularly for the stroll through the cobble-stoned alley ways and the fantastic coffee and cake to be obtained in their gorgeous cafes.