It is a common sight in Italy and France to encounter beggars everywhere, mainly in Church doors. Every church entry has its resident cripple dressed to suggest despicable hidden deformities worthy of a few sheckles. They allow you to go into the church unaccosted but as you come out, they wave their begging cup at you (usually a plastic cup, the traditional begging bowl is too expensive), uttering cries of misery that only money will allay. I presume the psychology is that you have been in the church praying so your conscience is now more susceptible to the plight of the miserable…and they are miserable. They must go to a school of misery to get so good at it.

The gypsies are a part of a complex under class in Italy. Most of the beggars appear to be gypsies but I’m sure not all of them would describe themselves so. I once saw a beggar at Naples railway station who had lost both legs and appeared to be definitely a home-grown cripple; maybe he was a member of a sub-branch of the mafia.  However the street beggars and sellers in the main appear to reflect sub groups of Italian society who come from elsewhere. Apart from the Gypsies, the other main sub-groups were the refugees from Africa who sell the replicas of high-fashion bags and the Bangladeshis who sell all variety of ‘crapola’ on the sidewalk, depending on the time of day.

During the day in 2011, the Bangladeshi 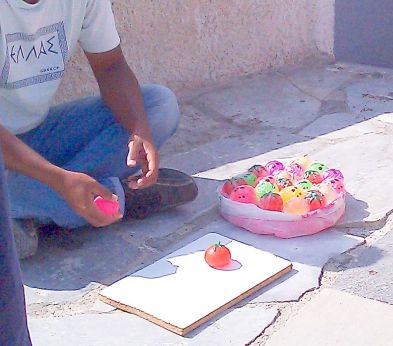 street-guys were selling ‘Splat-Toys’; toy-shaped lumps of gunk that looked initially like a plastic, cartoon character but when thrown on the ground, they splattered as flat as a French Crepe. Magically after a few seconds they morphed back to their original shape. These objects were clearly some mutation from a hi-tech plastics outfit where the mad scientists could see no practical use for this product for the advancement of science. They must have then decided it could be hawked off to toy-makers who could produce toys that would entertain a child for about 20 seconds. How the street-sellers sourced them I don’t know but I suspect a conspiracy theorist would suggest there is an evil mastermind behind the running of all European-based Bangladeshi street sellers who provides them with all the latest junk to sell to tourists and who then lives in luxury from the profits on the cliffs of the Amalfi Coast.

At night-time, the Bangladeshi street-sellers brought out a different gadget. It looks like a small, plastic, spinning top on the end of a plastic arm with a string attached that is pulled to ‘slingshot’ it up in the air. To add to the spectacle, these devices have fluorescent intestines that are triggered in the night air and so as you enter a darkened piazza, these helicopter lights are circling in the air like night-time fairies, gently floating down to earth! I presumed these devices had to be brought out at night as the Bangladeshi mastermind hadn’t yet mastered the glow-in-the-dark ‘Splat-Toy’.

Whether Day or night time, if it’s raining, the Bangladeshi guys have another marketing strategy; they bring out the umbrellas.  As soon as the first rain drop falls, as soon as the first clap of thunder sounds, as soon as the first lightning bolt strikes the nearby ancient cathedral’s dome, these umbrella-fellas spring up from the ground like magic mushrooms requiring only the addition of water. The Umbrella-sellers are always sorrowful looking gentlemen who thrust their umbrellas in your face as you pass by…their expression of shock and bewilderment when you resist their efforts is truly pitiable.  One unusual system that I noticed of transporting their stock at peak times is to toss out the baby from the family stroller and to fill it with umbrellas; I was appalled for the small, underfed, umbrella infant that was forced to crawl the streets of Naples while their father was out flogging umbrellas in the rain.

While a significant majority of the population of the major towns and cities of Italy are dependent on the tourists, there are different categories of merchants who are allowed to profit from the shoals of arriving visitors; there are legitimate leeches and illegitimate leeches who get to latch on to this life-giving blood stream. At times I didn’t know which groups to sympathise with more.

We visited Venice for a few days and booked into a small hotel in San Zacharria Campo, not far from the Corso that leads to St Mark’s Square. Our breakfast was served in a cafe that fronted a neighbouring hotel that shared the Corso with the passing streams of tourists. Every morning I sat fascinated by the commerce that was set up beside the lagoon to intercept the arrivals from the tourist buses. I watched the legitimate ‘crapola’ sellers haul their huge mobile stalls out of dark alleys and into the sunshine to take up a position on the boardwalk that presumably they had paid for through their Crapola-Seller union fee. These mobile stalls were ingeniously constructed to carry all their masks, their colourful hats, their fridge magnets and their varied models of St Mark’s and with a little bit of adjustment, they would spring open in the sunshine, ready for business. Here they would then stand for the entire day in the hot sun, selling rubbish to transients. I bought some masks for the girls in my life on the last morning of my visit there and my salesman wanted to know where I was from..

The other folk who set up each morning while we were drinking our coffee were the artists and the art sellers. There was the guy who could draw a funny caricature of you for twenty euro. I didn’t see one customer take up his offer over the mornings and afternoons as I watched him. There were other artists using various mediums to depict the picturesque back alleys of Venice, all bastardising their art in the hot baking sun of Venice. Then there were those just selling art, mainly large images of the canals of Venice at their sunny best, hand-painted in the back streets of Thailand.

The other legitimate purveyors on the Corso were the Gondola Guys; those cheerily dressed souls with their beribboned ‘boaters’ and their blue and white-striped shirts, were set up on every waterway and next to every bridge in Venice, even the back alley ones (I mean back-canals). They were the bridge trolls of Venice who jumped out and accosted you as you were passing by. For 100 Euro, these guys would pole you around the canals of Venice for half an hour…if you’re lucky you’ll get one who enjoys himself and he’ll sing for his supper. I didn’t hear many of those.

Commerce has got to be policed and so the Italians

have organised all sorts of policemen to ensure that only the legitimate sharks can harass the tourists. I could never figure out which branch of the constabulary were which and who did what but there were some fancy uniforms being paraded around so that the punters could feel safe. If the measure of success of the police force was the eradication of the Zulu bag sellers or the Bangla ‘crapola’ sellers then the Venetian police were an utter failure. On the way home one night, I did see one bag-seller being nabbed and questioned about his lack of papers. However, for the rest of the time, it seemed it was just a

great game of cops and robbers for the street sellers and the police. You always knew when a policeman was coming by the movement of the street guys. They would whistle each other, hurriedly collect their goods in their display blanket and jog away, collecting each other as they kept ahead of the strolling policemen coming their way. After the police had strolled by, the bag-sellers would re-emerge from the alley ways and continue to offer their wares.

In a Venetian square one late afternoon, we were having a drink, listening to some crazy Italian Jazz and watching the Bangla guys trying to sell splat toys. There was a group of them at various points of the square and their efforts at talking the passing touristos into buying their rubbish were not being rewarded. When charm didn’t work, aggression took over to be replaced by begging…none of it seemed to produce a sale. On this occasion the tip-off about the police arriving seemed to come by phone. Suddenly the sales-pitching stopped and the splat-toys were gathered up, thrown into one garbage bag which was then hurriedly stashed behind the fence of a nearby property. The Bangla boys then separated out and mingled with the crowd of music lovers, pretending to groove with the discordant beat of Italian Jazz, their eyes flickering nervously between the approaching uniforms and to the spot where they had stashed their loot. The only reason I didn’t go and lift the bag of splat toys myself and start up my own business was that I no longer had the speed to escape an angry hoard of small, starving Bangla-Deshis  chasing me across the ancient, ankle-breaking cobble stones of Venice. The image of ending up like one of their splat toys kept me observing the drama from my safe cafe seat.

Perhaps the saddest moments of my observations of the under-classes of Venice was the morning we observed a Gypsy beggar woman being herded out of St Mark’s Square where the Gondola boys ‘spruked’ their rides. Rather than loitering pathetically at the door of one of the churches, this Gypsy beggar had wandered, perhaps inadvertently, into Gondala territory and this particular Gondalier was having none of it. There were hundreds of tourists around as the tall gondolier pushed, shoved and berated the beggar out of his area…it wasn’t just for a short distance either. All the while he was directing her off, he was abusing her and she was clearly protesting her individual freedom to beg wherever she liked. I think she might have also mentioned that it wasn’t well-mannered to push and yell at a woman but eventually he got her away from whatever area he felt she had no business hawking her pathetic appeals in. The Gondalier had no respect for either the gypsy or the police who were meant to be keeping the area clear of beggars and safe for legitimate business; the rough justice all the more surprising coming from a cartoon-character in a striped shirt, wearing a boater with a blue-ribbon waving jauntily in the breeze. 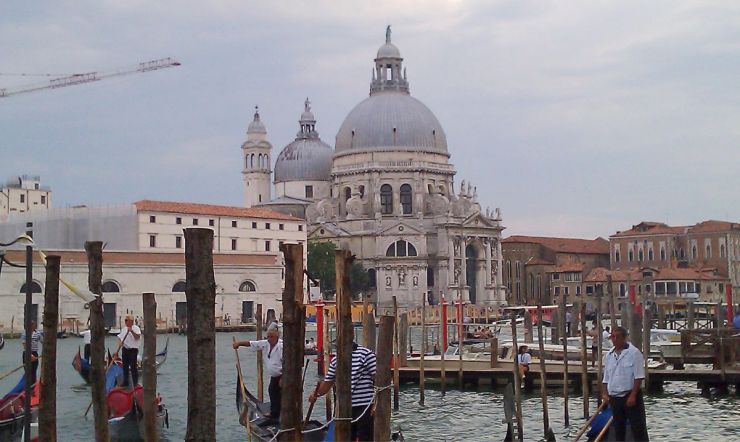