Being raised in a religious family with the key explanation of the origin of humanity being the Adam and Eve Story, I am not sure when I was introduced to the theories behind the slow evolution of humankind. I was probably 11 or 12 when I saw my first Flintstones Cartoon about ‘Stone Age’ families but I am not sure I was aware of the conflict between Fred and Wilma and Adam and Eve. I suspect I just lived with stories of the archaeology of stone age folk without being too impressed by people who claimed Genesis suggested only an age of 6000 years for the earth. I think this second argument lost any possible sway when somebody explained to me that God created the dinosaur fossils to test our faith back when he created the Earth in seven days. As my education continued, I decided I could live with the geological evidence of the age of the earth as well as an admiration for the ancient stories of the Jewish people. I eventually had to teach concepts like stone age humanity as a teacher but my comprehension of the process was a little vague. Understanding the complexity of the story behind the development of modern humanity only hit home when I visited the Dordogne as an ageing learner. I was really forced to make sense of tables like the following. 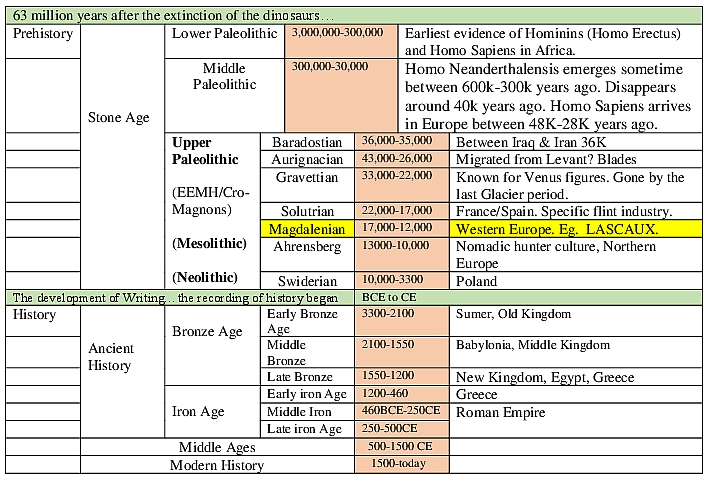 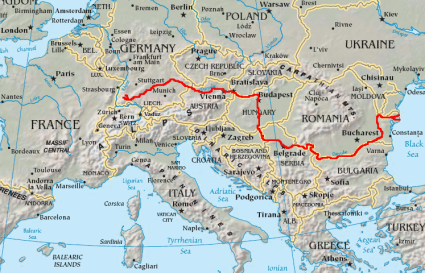 Fred and Barnie from the Flintstones were probably based on caricatures of the stone age man from popular culture with his club over the shoulder and dragging his chosen surprised partner into his cave. There is very little link between the Flintstones and real pre-history, the inspiration for the screen-writers might have been stories in the press about Neanderthals. These close relatives of humans lived throughout ‘Europe’ for hundreds of thousands of years but disappeared from the archaeological record around 40000 years ago. Whilst there has been no evidence of wide interbreeding with Homo Sapiens, modern DNA testing has revealed that many of us have a small inheritance of Neanderthal DNA so this ‘primitive’ early relative is still with us.

The arrival of Homo Sapiens out of Africa into Europe occurred sometime before the demise of the Neanderthals and it is proposed that perhaps their arrival had something to do with the departure of the large indigenous folk they encountered on their trail into Europe. The above map suggests the path they took after arriving from Africa at the Black Sea. They found the convenient path that is the Danube River and following this valley over many generations, they would eventually have found themselves close to the Vezere Valley in modern day France, ready to set down roots.

Charles Darwin published his famous book On the Origin of Species on the 24th of November 1859 and the vitriolic debate started all over the world about how humanity developed, by natural selection or by a creative God. Startling evidence for Darwin’s theories appeared in 1868 when workmen were working on the construction of a train-line and they found animal bones, flint tools, and human skulls in a rock shelter in Les Eyzies in the Dordogne. To the right is an 1880 drawing of one of the skulls discovered in the ‘Cro-Magnon’ rock shelter and the remains found were the first specimens of what became known as ‘Cro-Magnons’. The remains were recognised as forebears of modern humans, quite different from the first Neanderthal remains found in 1829. Eventually they were dated as having lived in the Vezere Valley around 32-30k years ago (Aurignacian Culture). All ‘Anatomically Human Remains’ (AMH) from 40-10k years ago were called ‘Cro-Magnons’ up until the 1970s when it became more accurate to divide this wide range up into specific ‘cultures’ as used in the summary table at the start of this blog.

Over 13k years later in the same valley as the Homo Sapiens from the Cro-Magnon shelter were found, the remains of a very significant culture of Homo Sapiens were discovered. They were the first examples of the Magdalenians, who lived in this valley from 17-12k years BCE; they were also named after the rock shelter in which they were first discovered. The image on the left is of the Magdalenian cave today after many years of excavation.

Like the Aurignacian people thousands of years before them, the Magdalenians had found a valley which they shared with reindeer, bison, early ‘cattle’ and many other animals, including, for thousands of years, the Woolly Mammoth. The rock shelter down the river a little from Les Ezyres (La Madelaine) was first excavated in 1864 and the archaeologists found a lot of material (eg spear points) that indicated that it was a shelter used by reindeer hunters. They found here carvings of bison as well as of the mammoth. The reindeer hunters of the Vezere Valley at this time must have been 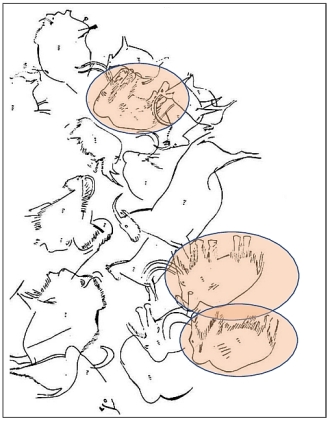 very familiar with this huge beast that was to disappear from the landscape around 10000 BCE. We know a great deal about what the Magdalenians hunted, not just from the many rock shelters in this valley and elsewhere in Europe, but from the caves of this region. The famous Lascaux caves are further up the valley near Montignac and they contain the beautiful images of so many of the Valley’s animals hunted by these early humans, but alas, no image of the extinct mammoth. However 19 kilometres north of Les Eyzies is the Rouffignac Cave that has large numbers of engravings (158!) of the extinct mammoth. The image to the right is part of a copy of engravings from the ceiling of this cave, also called ‘The Cave of 100 mammoths’.

Causes of the disappearance of the mammoth have been laid at the door of either climate change, the Homo Sapiens hunters, a meteor strike…or some combination of two or three of these disasters. Certainly the poor Mammoths would have rued the day that Hominins arrived in its domain.

One of the big questions about the Lascaux caves is why the Magdalenian game hunters were prompted not only to go deep into the caves of the region, but to draw/paint large numbers of images of the animals of the area. Were these painters Shamans? Was there a religious motive behind the paintings? Were they attempting to magically control the animals to ensure good hunting? There are currently no fully accepted answers to these questions around what prompted these artists to create symbols of their external world deep inside the caves of the region. The National Museum of Prehistory in its website makes the following assessment… “this is where (Vézère Valley) Humanity brought out its capacity for symbolic expression, shown as much by the Neanderthals’ first funerary acts (-80,000) as by Homo sapiens (modern man) with the apparition (appearance) of monumental art in various forms.”

But the Magdalenians weren’t the first humans to create symbols that would speak of higher things than where the next meal was coming from.  In the Prehistory table earlier in this blog is the reference to the Gravettian people who were a unified culture of Homo Sapiens living throughout the European continent (see map below) from about 33000 years ago to about 22000 years BCE. This was a period of extreme cold at the end of the last ice age and these people were hunters depending largely on a meat diet. Thus Mammoths were a particular target for these hunters. What makes these early Europeans stand out is that they also had time to carve small figures of the human female form which archaeologists came to call ‘Venus’ figures. Any suggestion as to the reason behind these portable figures is speculation but again it speaks of humanity contemplating their world and wondering about higher order issues other than their next meal of mammoth steak. Pertinent to our visit to the Vezere Valley around Les Ezyres is that it was here in 1864 that the first such ivory figurine was discovered at Laugerie-Basse. The image on the right show two views of the ‘Venus Impudique’, so named by the discoverer, Paul Hurault.

In 2018 I was riding a bike along the Danube River in Austria as part of a river cruise and I noticed a large statue of a Venus figure just above our bike path. I was quite surprised at the size of it because I didn’t realise that stone age folk had the time and materials to make such large size statues. We were in a hurry to get back to the boat and I only discovered later that we were riding past Willendorf where one of the most famous of the Venus figurines was discovered. The statue I saw was a monument to the discovery; the original figurine is in the town’s museum and I missed the opportunity of seeing the original ‘Venus of Willendorf’, one of the earliest art pieces of humanity dated at around 30000 years BCE.

While some of these pre-historic cultures inhabiting the European continent died out completely in the archaeological record, some of these cultures overlapped. While I hesitate to use Darwinian terms like the survival of the fittest, it is probably true that each prehistoric culture had perfectly functional ways of hunting food and finding shelter, but the one thing they couldn’t control was the climate and the geography of their homelands. As the world changed around them, new Homo Sapiens would arrive who seemed to be better equipped to deal with the challenges that the changing world brought with it.

Much of the landscape that Gravettians inhabited was formed during the last ice-age and by the glaciation taking place over the 90,000 years before their arrival in northern Europe. With the slow retreat of the huge glaciers, water in the sea rose slowly, eating away at their territory. The modern term for the land that disappeared under the rising seas is called the Doggerland. A geographical catastrophe occurred around 5500 BCE and a huge Tsunami washed away Doggerland and isolated the British Isles and Ireland. A huge section of the European continent was gone. The Gravettian culture had disappeared thousands years before this event but their predecessors would have been devastated by the loss of the land, the animals and their neighbouring tribes. I wonder what sort of religious crisis it precipitated in their descendants. 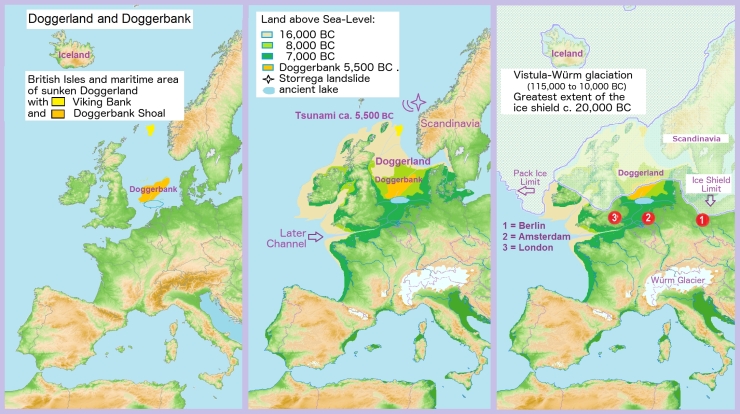 The Magdalenians had also disappeared well before the disappearance of Doggerland but they left behind a legacy that no other pre-historic culture managed; the amazing cave paintings of Lascaux and so many other sites that stretch down into Northern Spain. The curiosity of this feature of their culture is that it wasn’t passed on to the people that followed them in the Dordogne or elsewhere. Their achievements had to wait another 14000 years before the world discovered the amazing works of the great artists that hunted mammoths and reindeer and painted their masterpieces by flickering torches on the walls and ceilings of the Dordogne caves.