I had heard a lot about the ‘Live’ Revolution that occurred in December 1989, both before I had arrived in Romania, as well as on our travels around the various regions. It is historically notable for a number of reasons.

Given Revolution Square’s central role in the 1989 revolution, 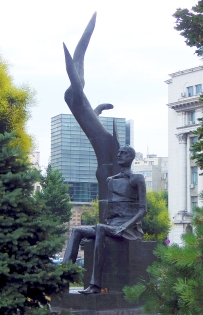 I was surprised it wasn’t named on the map of Bucharest issued by our hotel. Given that it was the main site I wanted to visit in the city, I asked the waiter at our lunch restaurant to circle the site of Revolution Square on my map . He thought carefully for a while before finally marking with an X, the square in front of the Presidential Palace. To confirm this, I showed the map to our guide and she immediately exclaimed, “No, that is not right!” She then pointed at the map and said,“Go down Victory Parade and you can’t miss it!”

I nearly missed it. There were a number of squares on the way down Victory parade towards our hotel. (The Golden Tulip!) At the third square we came to on our stroll, there were no major signs marking it as ‘Revolution Square’, but there were a couple of strange sculptures that may or may not have been a reference to the events of December, 1989.

After dinner that night, one of my ‘fellow travelers’ confirmed that we had indeed been in Revolution Square and so I determined to visit it early on the morning of our departure from Bucharest and take some decent photos.

The first building that I encountered on my 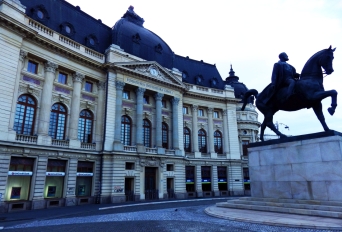 early morning inspection of the Square was the old palace of King Carol I (1866-1914) that was now a university building. In front was the usual magnificent equestrian statue of the king, the original having been destroyed by the communists, (This one was a ‘recreation’). This square had originally been called Palace Square before the overthrow of the Communist Republic.  The Palace was yet another magnificent building that King Carol I had organised in his adopted country. It reminded me that he had paid for the construction of a large Islamic Mosque in Constanta as a gesture of good will to the Turks of that city. He may have also financed the construction of the grand casino in the same city. When he was made ‘Ruling Prince’ in 1866, he clearly brought a lot of finance with him from his Hohenzollern-Sigmaringen family background. A large part of this fortune must have been spent on building projects in Romania.

The central building in the square was finished in

1950 as the Ministry of Interior. It was taken over by the Communists as their headquarters in 1958 and Ceausescu had his office here. It was from the balcony of this building that he made his last speech, to the gathering of more than 100,000 citizens in the square on the 21st December 1989. Riots continued in the square over the next night and day and 162 people were shot in these protests; the total throughout Romania totaled 1014. The crowds eventually invaded the building and a Romanian flag with the socialist emblem cut out out was waved from the balcony. At 12.06am the next morning, the Ceausescus fled in their helicopter.

I had read that bullet holes were still to be seen in the walls of the buildings of this square but I couldn’t discover any. This was in contrast to the Alte Nationalgalerie on Museum Island in Berlin where there were so many bullet-holes in the sandstone blocks that it clearly had been a site for one of the final battles of World War 2 when the Russians had arrived.

On taking a closer look, there were clearly some monuments

to the tragic events in the square 29 years ago. This closer look also revealed that the Romanian Government since that time had little money or interest in up-keeping the square to a standard reflecting its status in the story of the birth of modern Romania. Pavers around the central sculpture, the ‘Memorial of Rebirth’, had been smashed and graffiti remained unremoved from the base of the sculpture. This monument, consisting of a marble obelisk passing through what looked like a stork’s nest, seemed to be ineffective in capturing the events being memorialised. The ‘nest’ apparently represented the earth and the red paint underneath it represented the blood of the people. It sadly looked like the graffiti artists had brought paint-ball guns to the party and had taken pot shots at the earth-nest. Perhaps former communist military leaders have little artistic taste?

Despite the above negative reaction, I still thoroughly enjoyed my early morning stroll around the haunted Revolution Square of Bucharest. It continued the intriguing story of a dictator who did not recognise that his time was up…

He was a dictator whose extended time in power had damaged his insight into the needs of other people and so he failed to read the graffiti on the walls informing him that it was well past his time to retire gracefully.