In 2004 on my first trip to Italy, I was privileged to visit San Gimignano in Tuscany and spend a week there, wandering its stone walled streets and marveling at the views across the surrounding valleys. On that visit I remember we were driving back from an afternoon’s outing to one of its hill town neighbours and we stopped to take in the views not far from home. I was struck by the sight of San Gimignano across the valley, bathed in the

afternoon’s setting sun. I decided that this was closest I would come to Emerald City.

So it was happenstance that 15 years later I was able to return and spend another day strolling its streets and alleyways and wondering whether it had aged more than I had. Unlike me, it looked more stunning than my memory or my old photographs from 2004 indicated. Yes, there seemed to be a lot of fellow tourists there strolling the streets but when I checked the old photos, the one on the right from 2004 reminded me that it been pretty crowded back then. Also, I took another photo of San Gimignano from across a valley, and it still looked like Emerald City.

This Tuscan hill town started of life as an Etruscan settlement. It entered into ‘history’ at the time of Julius Caesar when the famous orator Cicero exposed the Cataline conspiracy in 63BCE. Two of Cataline’s supporters fled north and built a ‘castle’ where San Gimignano stands today. Attila the Hun was ravaging Northern Italy in the fourth century and apparently the settlement was saved by the local Bishop doing a deal. Clearly San Gimignano needed a wall so over the next few centuries a walled town developed.

From the early middle ages, the town’s prosperity improved as it had became a stopping point on the Via Francigena, the medieval route of pilgrims making the journey from Canterbury Cathedral to Rome. This ancient route took the pilgrims across through Burgundy in France, through Montreux in Switzerland and down into Northern Italy via Sam Gimignano, and then on through Pisa, Lucca and on to Rome.We only became aware of this international connection with San Gimignano while we were staying at a lovely hotel in Pancole, 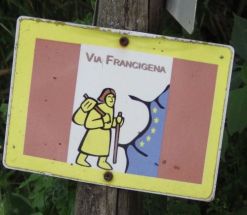 an even smaller village across the valley from San Gimignano. In making the short stroll around Pancole, we noticed the ‘Via Francigena’ sign both at the side of the road as well as a road sign pointing through the underpass of the Sanctuary at Pancole. Apart from the signs, we were also surprised by the number of striding walkers happily making their way from Pancole across to San Gimignano.

The later middle ages was a period of history that had the most dramatic effect on the physical appearance of the town, giving rise to the curious square towers that mark the skyline of San Gimignano, resulting in the dubious compliment, the ‘Manhattan of Tuscany’. Given that San Gimignano is close to Florence, it is no surprise that local wealthy families were caught up in the broader politics of the day that had such dramatic repercussions for their larger neighbour. Northern Italy was torn between their affiliation to both the Pope in the south and the powerful Holy Roman Empire over the northern borders in Bavaria. The conflict as to who was more consequential led to the rise of conflict between the Guelp faction and the Ghibelline family faction in Florence and this spilled over to their supporters in San Gimignano. The consequence of this family rivalry was the building of 72 tower houses over the years for the defence and the pride of the families involved. Eventually the local tower real estate boom was restrained by the town council insisting that no tower was to be higher than the one next to the main square. Today there are only 13 towers left but they still define the dramatic appearance of this hill town.

The main square is Piazza della Cisterna with a well that dates from the mid-14th century. The main street in San Gimignano is Via San Giovanni and it starts from the front gate of the same name and treks up the hill to break out into this beautiful space with its rich ochre stone buildings, pitted with the rain and sleet of the centuries. 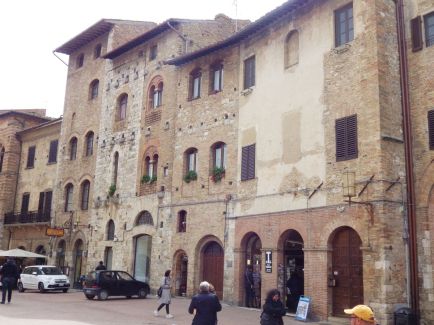 The second largest square of the town is Piazza Duomo. The other major street of the town, Via San Matteo, starts at the gate of San Matteo at the opposite end of town to Via San Giovanni and struggles up the slope with its burden of foreign tourists to this piazza. The square itself is hidden around the corner from the end of Via San Matteo so you unexpectedly break out into this ancient square and you need to pause to take in the Collegiate Church of Santa Maria Assunta at the top of the square with the ruggedly grand Palazzo Communale and Palazzo Podesta facing her from the edges of the piazza. A visit inside this church will reward you with a beautiful series of frescoes covering a wide range of  stories from the Old and New Testament as well as the story of the local saint, Santa Fina. 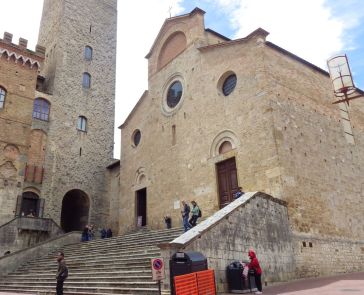 At the end of this article there is a map of

San Gimignano with our 2019 stroll around the town marked on it. This type of visit where you let the streets take you where they will is as good as any approach to visiting this Tuscan Hill town. However if you have a few days to spend in or around San Gimignano, it is possible to take a more structured approach to ensuring you see all of San Gimignano. One method would be to determine that you visit the five gates in the wall of the town and use those as a starting point to stroll back up the hill through that part of town. Most visitors start at the two gates already mentioned, San Giovanni and San Matteo, as this is where either the tourist buses stop or in the case Porta San Matteo, where the easiest car parking areas are.

My other favourite gate is the Porta

della Fonti which opens out into the beautiful valley on the east side of the town. A long series of steps takes you down to the medieval fountain which was the towns main supply of water from the 14th century. This version of the fountain conceal the first Lombard stony fountain dating back to the ninth century. This is a great walk to do if you have more than one day to check out San Gimignano.

Every old Tuscan hill town has a Rocca or a fortress to protect the town from being overrun by envious outsiders coming from across the alps or determined neighbours insistent on running the territory their way. San Gimignano’s fortress/citadel is probably built on the highest part of the hill and is worth the short walk through the Piazza Delle Erbe to the western walls. Its name is Rocca di Montestaffoli and was built in the fourteenth century during the inter city wars between Florence and Sienna and to provide a bastion in times of family disturbances between local Guelph and. Ghibelline families. When life became more peaceful, it became a Dominican convent. Today it is a very peaceful place to visit, take in the expansive views over Tuscany, listen to one of the musicians who takes up home there or visit the restaurant in the citadel itself.

San Gimignano…Emerald city or just a great hill town to immerse yourself in the mystery and romance of its medieval ambience? Go and find out for yourself…it is one of the things you will do in your life that you will never regret. 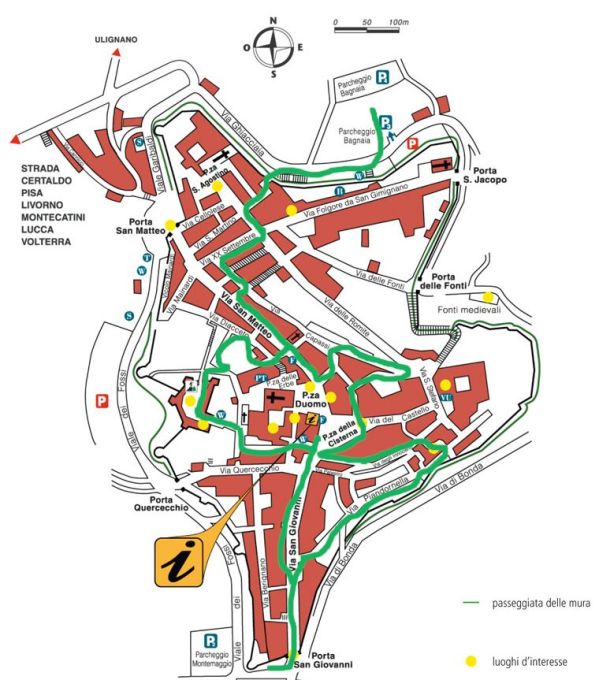