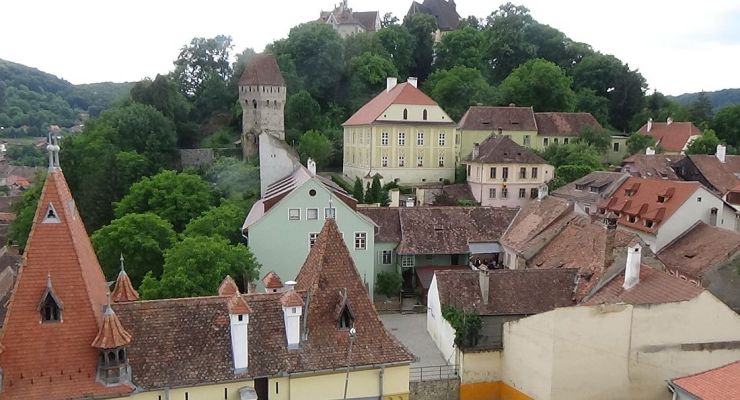 After enjoying our stay in Sibiu we

headed towards the medieval town of Sighisoara. It was a couple of hours before we arrived at our destination, a reasonably sized town of 28,102 (at last count) with an old citadel in the centre, built on a significant hill. The citadel is surrounded on all sides by fortifications began back in Roman times but built over in the twelfth century by the Saxons who had moved into Transylvania on the invitation of the Bulgarian King to protect his frontiers. This early Middle Ages wall has been defending the citizens of Sigishoara ever since; Transylvania has been a route for invading armies from both directions ever since the twelfth century.

We were staying the night at a hotel on the main square of the citadel but buses were not allowed up the top so our hotel had to send their vehicle down to collect our large suitcases; our back-packs remained in our bus for collection later in the afternoon. We walked up the hill and through the gate of this imposing fortress citadel to our hotel. It was then toilet stop time and then on to our restaurant for lunch. Given that we had been introduced to the story of Vlad the Impaler at Brasov, it was like catching up with an embarrassing old friend when we discovered that our restaurant was in the ‘original’ house of Vlad’s father, Vlad Dracul. There was no mistaking the house’s heritage given the large mural of Vlad just inside the front door.

Vlad’s father was apparently the first person to use the name ‘Sighisoara’ in a written document back in 1431. Such is the significance of the association of the Dracul family with Sighisoara that back in 2001-3, a Dracula Theme Park was considered near the town but opposition from locals eventually determined that it didn’t go ahead.

After lunch we were due to inspect the major building in the square which was a huge clock tower with fantastic views over the Sighisoara citadel and the surrounding countryside. It was built in the thirteenth century and is the largest of the defensive towers built into the walls of the Citadel, particularly to assist in the defence of the main gates. There are various history exhibits in the tower that you pass through on your way up to the top of the tower for the grand view. The clock itself is a major feature of this tower but the mechanism that runs the traditional figures emerging at key times of the day is broken.

Unfortunately rain was coming on and we had to get the rest of our luggage from the bus at the bottom of the hill before our driver disappeared to his lodgings downtown. It was over the next half an hour that I came to understand one of my fellow traveller’s explanation of the ‘Law of Malicious Probability’.

Being amongst the last ones to leave the Clock Tower, the rain had started by the time I was heading for the citadel gate. I sheltered for a time under the gateway but decided that the ‘shower’ wouldn’t last long so I continued on down the hill, trying to seek shelter under the overhanging trees that lined the road. I made it to the bus, not completely soaked, gathered the back packs and waited for what was now a storm to pass. Our bus driver needed to be elsewhere so I had to jump out and seek shelter under a tree.

By this time, the rain had increased and the thunder and lightning had started. It was so vigorous that I started to worry about all the stories I had heard of picnickers standing under trees in lightning storms and being blasted to smithereens. My fears were telling me I was in the middle of a personal disaster zone. I had noticed a building 200 metres away that I recalled was a toilet; I decided that it would be a safer place to see out the deluge. I then scurried down the footpath in the pouring rain to ensure I was soaked thoroughly and discovered that the ‘foyer’ of this toilet was already crowded with a group of ageing German tourists. Rather than join the crush, I thought I would slip through the crowd and go directly to the toilets and take the opportunity for some relief. Encumbered by wet backpacks and trying to do the business in a narrow toilet cubicle is not the simplest exercise.

Eventually rejoining the packed scrum in the open area in front of the toilet door, I realised two things.

The first dealt with the truism that I had learned from English television shows that Germans have no sense of humour. This was now thoroughly undermined by this group of cheerful German pensioner travellers who were having a fine old time gazing out the toilet door at the pouring rain, laughing and joking about their situation. I could not empathise with their enjoyment of their happy predicament, nor could I understand the wise-cracks they were making as I did not ‘sprechen sie deutsche!”

The second thing I realised was that I had enter a full-service public latrine. I had not noticed on my entry that there was a lady sitting at a table just inside the door collecting five Lei for the privilege of passing time, soaked to the bone, packed like a sardine inside a Romanian toilet with too many amused German tourists while the apocalypse was occurring outside…and I had to pay for the privilege!

As usually happens, the rain stopped and my Germanic friends moved out to the comfort and security of their warm coach while I staggered back up the hill in the last of the rain showers.  I was very grateful our hotel room was ready to rid myself of the back-packs and the wet clothes. The effects of the ‘Law of Malicious Probability’ were finally over…until the next time!

Later that afternoon we had free time to explore 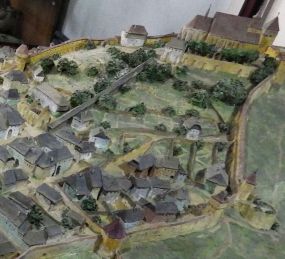 Sighisoara’s very own ‘Stairway to Heaven’. They were called the ‘Student Stairs’ and they were built in 1654 by the kind and understanding citizens of Sighisoara to ensure the students, who needed to get up the further hill to the school, were not encumbered by the rain, sleet and snow in wintertime. In the ‘model’ of the town in the Clock Tower, the covered walkway is clearly illustrated. It no doubt was appreciated by the other citizens of the citadel on Sundays when they would walk up to the ‘Church on the Hill’ or visit the cemetery that has the gravestones of local Saxon families going back many centuries. The Church on the hill (429m above sea level) is the third largest church in Transylvania and was built in the fifteenth century with the usual colourful history of having its roof and belfry destroyed during a Hungarian siege in 1704.

Being a young country with only a little over 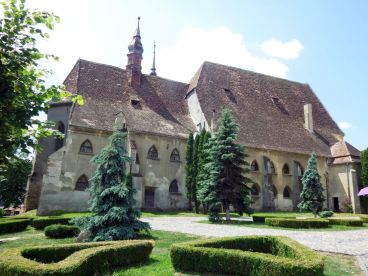 two hundred years of European settlement, Australia has missed out on many of the great social changes that have ravaged European societies. One such issue was the Reformation and counter-Reformation in Europe in the 16th Century. This was illustrated by our visit to the ‘Jesuit Monastery’ Church which was very near the Clock Tower. During the Reformation it became a Lutheran church, the Dominicans were kicked out, their monastery closed down and any of the traditional icons were removed. It would have been a harrowing process for the monks as well as the older parishioners who would have struggled with the new approach to getting to heaven. We were given an interesting tour of this church with a local guide explaining its background.

The rest of our tour took us around the walls of the citadel of Sighisoara. The two important points of this walk were…

The only difficult moment that arose for our group touring this lovely medieval town occurred in the Ironsmiths’ Tower when one of the husbands, after repeated misdemeanours, had to be severely disciplined by his wife as can be seen in the accompanying image. She was heard to mutter, “This is going to hurt you more than it will hurt me!”