We were stopped on a street corner in Seattle, looking for the Amazon Dome that we had noticed was being built somewhere near our hotel. Both of us were providing alternative viewpoints on the way the streets ran and the best direction that would lead us towards the ageing Seattle Space needle as well as pass the cutting edge Amazon dome.

We were interrupted in our discussion at the lights by two older, well-dressed gentlemen who, while passing us, were taken by the colourful and stylish nature of the ski jacket that I was wearing. The African-American gentleman of the pair immediately stopped and commented admiringly,

“You are only human!”

Whilst noting my attire, he also noticed that we were discussing something about the map and he immediately said,

“Can I help you find your way?”

Gayle explained that we were looking for the Amazon Dome and he smiled and said,

“That’s just down there on the right. You can’t miss it…it jumps right out at you!”

Despite our great experience on a street corner in Seattle, helping strangers in need seemed to be an issue for the citizens of the neighbour cities of Vancouver, Victoria and Seattle. The number of people, mainly men, sleeping rough on the streets of these lovely cities was surprising to us. It was a strange contrast to our affluent days, walking the same streets, checking out the beautiful aspects of life in the cities they called home. Sub-zero temperatures in the north-west of the Americas bears no comparison to living rough in a sub-tropical city like Brisbane; like the swallows, why didn’t they move south to California where they wouldn’t need such thick blankets to lie on pavements that may have retained some of the heat from the sunny days to warm their nights. One night we were walking back to our hotel after a bowl of Pho soup at a Vietnamese restaurant and we passed a man lying on the pavement outside Macys Department Store, completely wrapped in a blanket huddled against the wall of the building to be as far from the gutter as possible where the light snow was starting to settle.

Curiously, earlier that day we had been on a history tour of central Seattle where we were shown the street that our guide suggested was the origin of the term ‘Skid Row’. It was the road coming down a steep slope from the hills above the centre of the city; it was the street that the early loggers of the timber on those hills slid the logs down to the dock for shipping out to California. It has become a metaphor over the last century for “an impoverished area, typically urban, whose inhabitants are people ‘on the skids’; this specifically refers to the poor, the homeless, or others either considered disreputable or forgotten by society.”(Wikipedia) On our trail home that night, we passed a large group of obviously homeless African American men who had gathered for camaraderie in an alcove of another department store wall. There were no signs of swags for the night so who knows where they went later. The curious thing was that in the next alcove down, were three policemen on bicycles, huddling out of the wind, chatting amiably together. It didn’t appear that they were monitoring the guys next door, it was just their job to be out on the snowy streets that night in the centre of the city waiting for calls for more urgent issues than the homeless guys up the street.

In Kelowna Canada, a week before arriving in Seattle, I had gotten up at first light and gone for a walk around the block where our hotel was located. I passed by a bus shelter outside a thrift shop that clearly provided handouts for the homeless. The shelter was full of folk, huddling out of the cold, presumably waiting for the shop to open. Somebody had a music player that a few of the younger ones were grooving to. They didn’t seem too depressed by the fact that outside the shelter, the ground was covered with 10cm of snow and the temperature was a few degrees below zero. One of their colleagues of the street arrived and he was greeted with enthusiasm that only good friends deserve. The most striking feature of this street was a couple a bit further along the street  pushing shopping trolleys full of plastic bags of presumably their belongings. It wasn’t an environment that was kind to those without a home base and a place out of the snow. 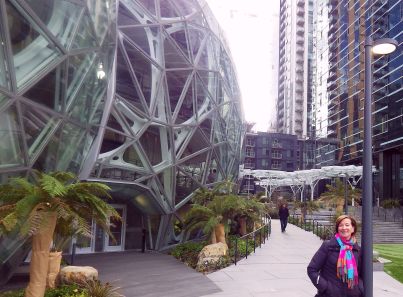 Back in Seattle, Gayle and I had left our charming friends who had reassured us that we were on the right track to visit the Amazon Dome. We were interested for a couple of reasons to visit this facility. We had both been early up-takers of Amazon’s Kindle; the company had started in Seattle as a book shop experimenting with new ways of selling digital books. Coming from Australia, we had heard the fears of Australian retailers knowing that the Amazon juggernaut was heading to Australia to compete with the local retail stores. So why visit the Amazon Domes.

Amazon.com Inc on Monday opened a rainforest-like office space in Seattle that it hopes will spark new ideas for employees. While cities across North America are seeking to host Seattle-based Amazon’s second headquarters, the world’s largest online retailer is still expanding its main campus. Company office towers and high-end eateries have taken the place of warehouses and parking lots in Seattle’s South Lake Union district. The Spheres complex, officially open to workers on Tuesday, is the pinnacle of a decade of development here.

Amazon is clearly thinking outside the normal box of corporate ideas to keep its workforce continuously pushing out the new ideas for the mothership to make money. However what attracted my attention was the curious sense of social responsibility for the city in which they started.

My concerns about the large numbers of homeless citizens of Seattle on Skid Row made me ask the obvious question; “What can societies do to ensure all citizens, no matter their background, have shelter from the storms of winter as well as providing opportunities for all to become self-determining citizens.” The government structures of Seattle and the other neighbouring cities we visited were clearly failing their troubled citizens who were sleeping rough on their streets.

In the free market economies in the Western World we are used to companies whose only guiding light is the health of their balance sheet. Thus I was surprised to read one of the self-promoting displays in the Amazon Dome that seemed to suggest that Amazon’s approach to their city was a little different. By 2020 they will be providing space for sheltering 200 people experiencing homelessness. They argue that “At Amazon, we contribute to the communities where our employees live and work…this means sharing space on campus with organizations doing life-saving work to make Seattle a better place.”

It made me wonder whether our societies should stop worrying about collecting company taxes for governments to use the money to provide social services to the homeless? What if companies themselves decided to take a wholistic approach to their communities and see it as their responsibility to provide creative support to the cities that provide their creative workers who are the basis of their financial success. What if Amazon’s creative thinking about new products was also directed at solving intractable and unattractive social issues? Perhaps financial creativity and social creativity could be seen as inextricably linked in providing the solution to the apparently intractable problem of keeping the unfortunates from freezing to death on every city’s Sid Row.

One of the arguments in favour of encouraging companies like Amazon to build accommodation for the homeless in their home city is the evidence coming out of Finland where pilot projects involving the provision of homes for homeless people has shown significant positive results. I am not sure if it is intuitive to suggest that if you don’t have to worry about freezing to death every night, you are more likely to look on the bright side of life and take up other forms of assistance that society might throw your way.

But whether I should be promoting the ethics of Amazon to assist us with getting the homeless off the streets of Northern America is another matter. Given that I have referenced in this article, the famous Tom Hanks and Meg Ryan film set in Seattle, perhaps I should also look at their other box office winning film, ‘You’ve Got Mail’, for guidance. The background to this film is the story of the small book shop in danger of being swallowed up by the large book-store chain that has opened up around the corner. In the real economic world of the nineties, the ‘minnow’ book shop is inevitably swallowed by the ‘barracuda’ bookshop. In the new Millennium, the ‘shark’ Amazon inevitably swallows up the chain bookstores. Who knows whether homeless women in tweed suits are roaming the streets of Canada and the USA, made redundant by the Amazon juggernaut. I hope the plight of these bookshop workers is part of the reason why Amazon is interested in providing accommodation for the homeless in its home city.

Homelessness is clearly a very complex issue to resolve by twenty first century societies. Will capitalism come to the aid of their communities to ensure their workers have shelter from the storms around them…or should I side with Donald Trump and suggest that Amazon solutions aren’t always for the benefit of ‘everyman’…

“Why is the United States Post Office, which is losing many billions of dollars a year, while charging Amazon and others so little to deliver their packages, making Amazon richer and the Post Office dumber and poorer? Should be charging MUCH MORE!” (D.Trump…29/12/2017)