For the past ten years in February/March, a group of of old skiing friends have decided to travel to British Columbia, Canada or Colorado USA and spend three or more weeks sampling the skiing wares of the famous ski resorts of North America. In some ways they are journeys of loss  for the Australian economy as most of the group has sworn off going skiing in their home country. The usual reason given goes something like, “Why go to Perisher and spend 20 minutes in the queue and then spend 5 minutes coming down the slope? When you come to the American or Canadian ski fields, you spend five minutes in the queues and at least 20 minutes coming down the slopes.”

Another reason for not staying and skiing at

home ski fields is that the comparative cost of two-week ski holiday in Canada/USA is generally in the same range as what you would pay for lift tickets, accommodation and travel to the ski fields of Australia. The comparative shortness and unreliability of the ski seasons in the Southern hemisphere is also another issue raised when this argument gets heated. Although, when ‘baby-boomer powder-hounds’ get arguing about the merits of skiing between the continents, they often skip the data and fall back on the “We’re too old to drink bad wine” argument! Here are some reviews of ski resorts in British Columbia, Canada based on the experiences of these ageing alpinists.

Sun Peaks advertises itself as Canada’s second largest ski field after Whistler. Whistler is certainly the more famous of the Canadian ski fields, particularly amongst young Australian’s who love to travel to Canada

to gain poorly paid jobs but almost unlimited access to skiing opportunities not available in Australia. One of the reasons the experienced snow travelers avoid Whistler (apart from the crowds) is that the quality of the snow is often less predictable than the ski fields further inland. Being closer to Vancouver and the coast, Whistler is more subject to lack of early season snow due to its climactic conditions, such as more regular rain fall. It is argued that if you are planning your ski holiday at Whistler, you need to book much later in the year so you don’t end up committed to a ski field with little to ski on. The consensus appears to be that places like Sun Peaks are more consistently predictable.

The statistics for Sun Peaks are pretty impressive.

When the argument about length of runs start, Sun peaks has both a five mile and a seven mile run that can keep you out on the slopes for nearly an hour before catching the next ski-lift.

“Sun Peaks is my most visited Canadian Ski Resort and never

ceases to impress me.  A 50 minute drive from Kamloops Airport finishes in a valley with ski trails on three faces which means you can always find a trail in the sun.

It’s worth the early start to be at the lifts at 8.30am when they open to get the best of the groomed runs.  Heading up on the Sundance Lift and a skiing down Sundance, Sun Catcher or Sun Downer slopes first up is a great way to start your day.  You can then head on over to the Sunburst Express for a run down Cahilty onto Five Mile; this is a very pleasant and easy run.  You join Five Mile where it widens to something

like an empty eight lane highway, so perfect for those still in their early stages of skiing.

By now it’s time to head in for coffee and my favourite place is Bolacco Café; great coffee, hot chocolate and home made treats.  The blueberry scones are to die for.

From here a short walk across the covered bridge to Morrisey rewards skiers with a very varied selection of challenging and gorgeous runs down the Sun Peaks Mountain.”. 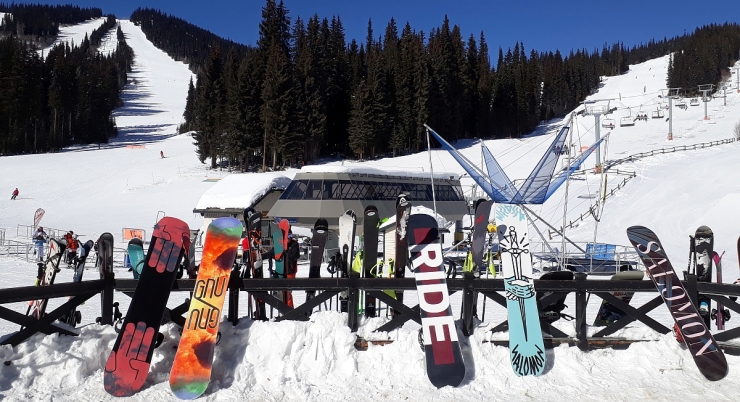 WHEN THE SNOW STARTS FALLING AT SUN PEAKS! 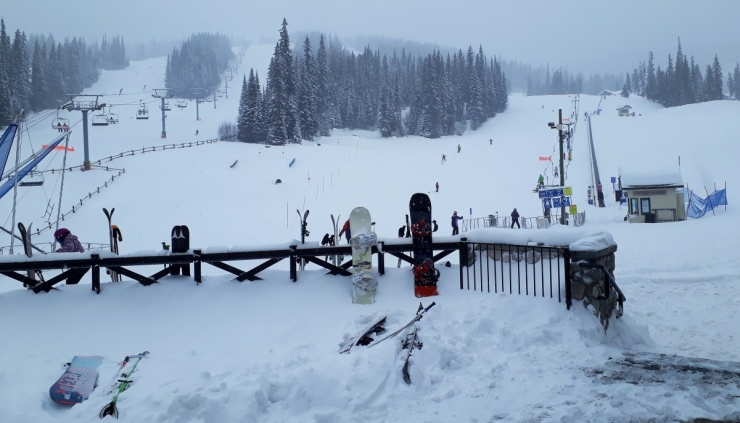 When white turns to green each year…

Like all the alpine resorts of the Rockies in Canada and the USA, winter skiing isn’t the only reason people flock to these holiday destinations. Skis are replaced with hiking boots and bike helmets as what were ski trails in the winter time become cross country walking and bike trails in the summer months. Flat snow covered expanses on the edge of town suddenly become spectacular golf courses.