Travelling on large passenger ferries between countries is a pass-time for the experienced traveller. Having caught two large passenger ferries in 2018 between major cities, I have realised that to get the most out of this experience as a tourist, you need to know what you’re doing. As a tourist, by definition, you generally don’t know what you are doing. By being polite and respectful to other peoples’ needs, you discover that the travelling locals get to the front of the queue so they can get the best seats on the ship with views or the best seats in the on-board food hall. The polite, respectful, hesitant tourist discovers that all the best spots are taken and so gets to stand on constantly vibrating decks with their large bags while the locals scoff food and enjoy the ride.

We were catching a ferry from Helsinki to Tallinn, Estonia,across the Gulf of Finland when we were caught in this newbie trap of spending the two and a half hour journey squirming on the last available seat next to the food outlets. We could have gone and sat on the top deck and enjoyed the views of the open sea but the wind in our hair was emanating from the North Pole so that was not an option. 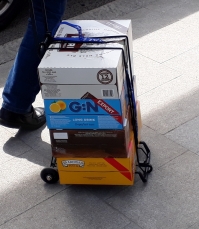 to have lunch on the other side of the wide gulf between Estonia and Finland so that on their return they can purchase cheap grog from the shop on the boat. After catching this ferry, we noticed that another bad habit that could be exacerbated on this trip to Tallinn is in the Casino on the ferry. There is an ill-supported theory that postulates that cold climates force humanity indoors where they become more prone to drinking and gambling.

Our arrival in the centre of Tallinn was a different experience again to our boat ride.There can be no doubt that the old medieval centre of Tallinn is a delight to stroll around and  explore the meandering streets as they snake their way up the hill to the Alexander Nevsky Cathedral. The staff at the hotel we stayed in were continuously helpful and the food we experienced at the restaurants was first class. It reminded me of Bruges in Belgium but without the canals or swans.

The Old Town’ of Tallinn is definitely devoted to the interests of tourists. This becomes completely obvious when you exit thought one of the doorways in the walls of the city and enter the modern city of Tallinn blessed with a highly efficient transport system. It is this part of Tallinn that is facing the modern world squarely in the eye and has become famous for the huge number of ‘Start-Up’ companies per capita as well as cutting edge companies like ‘Skype’. However tourists don’t want to see the modern buildings that they can see at home…they come to see the fantasy kingdom that they encounter down every street in the ‘Old Town’. It reminds them that Cinderella could have lived down one of these streets. It is here that beautiful medieval buildings surrounded by fortified castle walls and towers remind you of a mythical past where beauty is a daily experience down these cobbled stoned streets and can be taken home preserved in the Baltic amber from one of the many colourful curiosity shops.

The past of Estonia is not only preserved in the “Old Town’, We caught one of the local buses out along the Kopli Gulf to visit the Outdoor Museum or Eesti Vabaohumuuseum as it is called in Estonian. Dedicated historians and crafts men and women since the 1960s have been collecting examples of old farm buildings, windmills, an Inn, a school house, a fire brigade house and rebuilding them on this site before they disappear before the march of modern times. The buildings on the museum site represent 19th Century architecture and life styles from all over Estonia and we spent a couple of lovely hours cruising around the large site on our hired bikes. We sat down to Chicken and rice soup in the rebuilt 1840s inn from Kose Village, Harjumaa District that was again serving food and drink to the travelling public. 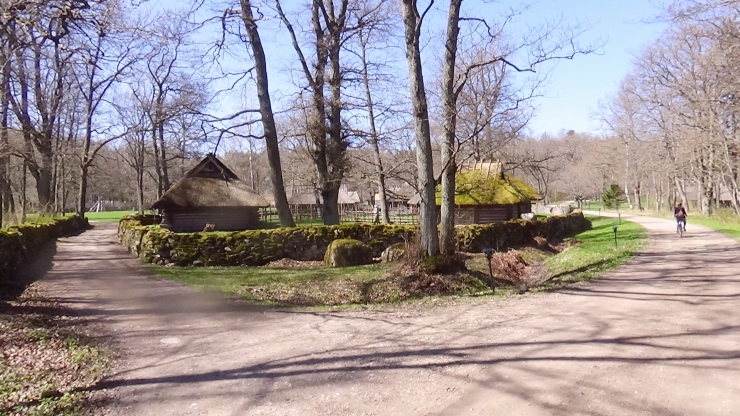 After a full morning of exploring the rural past of Estonia, we headed back to the ‘Old Town’ to once again get lost in its mysterious back streets. Walking along the inside of the old walls, it is clear that Tallinn hasn’t suffered the fate of so many other medieval cities of Europe by having its town walls blown down by invading armies with newly invented canons. For example, Helinski, two hours boat ride over the Baltic Sea in Finland, has no medieval centre because the town was burnt to the ground in 1809, not long after it was taken over by the Russians. The only advantage that this brings is that Helinski was completely remodelled and rebuilt and its 19th century architecture in the central area of the city is very beautiful.

However it is not all magical street strolls in the Old Town of Tallinn. Signs of the harsh history that previous generations of Estonians have experienced in the twentieth century are there to be seen. For example, tourists can arrange to visit the cellar where prisoners of the KGB were interrogated before being shuffled off to Siberia for their sins against the takeover of Estonia by the Russians after World War 2. Walking along from Freedom Square down Harpuy Street you can read the story of the fate of the Estonians who were killed here in March 1944 by 280 military aircraft bombing the city. 554 residents and 171 soldiers and prisoners of war were killed and 20000 people left homeless. Soviet authorities have always denied the participation of the Red Army in the bombing of civilian targets in Tallinn.

Soviet Russia ruled Estonia from 1945 to 1989. (The rowing regatta for the 1980 Olympic Games rowing was held in Tallin). Our neighbour in Brisbane speaks of her parents hardships during this time. But there is something to be said for a country and its people who sang their way to freedom and independence between 1987 and 1991. It all began with a spontaneous night of mass singing demonstrations at the Tallin Song Festival Grounds . A visit to this park at  the top of the hill near Kadriog Palace reminds tourists of these heady times. 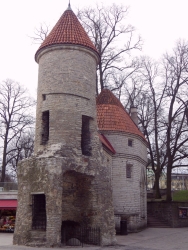 Tallinn hasn’t lost its medieval walls and towers and its great fun to visit the fairy-tale kingdom today. It’s a tourist escape but the world would be a lesser place without it; its existence for the next generation of Tallinn citizens and world travellers is worth fighting for in more than just song.