I visited the British Museum in 2019 and enjoyed every minute of it. However I didn’t visit the exhibition hall where the Elgin marbles were; I have done so in the past and I am not sure that I avoided it this time because it encapsulated everything that is wrong with Museum ‘colonialism’…perhaps there were just too many other things to see! Museums world-wide are full of fantastic artifacts that have a less than transparent provenance. For example, the Elgin marbles are not a stand-alone story of artifacts that have been dubiously removed from their country of origin. At the time of the Roman Empire, the Roman generals looted Greece’s conquered cities and shipped all the beautiful art works back to their villas in Rome or Pompeii where they were eventually destroyed anyway by invading Goths and Vandals or earthquakes. In these enlightened times, trade in illegally accessed, ancient art works from Asia Minor is just as endemic. For example, you could be confused into thinking that the bronze statue on the right is very similar to ones held in Athen’s National Archaeological Museum. It was rescued from the sea in 1964 off Fano on the Adriatic coast of Italy and is now happily in a Californian Museum. Its return has been demanded by Italy but its owners claim the request has no legal basis! What a relief then to go with clear conscience to the amazing National Archaeological Museum of Athens and know that the artifacts have generally been sourced from their country of origin. 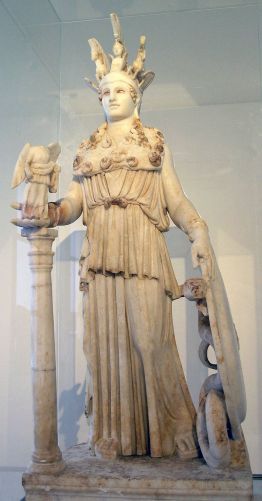 You could argue that the Greek War of Independence that began in 1821 was partly about the demand for the Greek people’s control over its heritage. The Greeks achieved independence in 1829 and that was the first year that a National Museum was opened. The current Museum was finished in 1889 taking over 20 years to complete. Anybody who has ever read and been amazed by the stories of the early Archaeologists, this is the place to go; you can see here the ‘Trojan’ artifacts collected by Heinrich Schleimann and the artifacts from Knossos, Crete collected by Sir Arthur Evans. If you were wondering what the statue of Athena Parthenos once looked like in the Parthenon, there is a statue here that is apparently a good replica.

Like most Museums, there is too much to see at NAMA. Wandering aimlessly is an option but one method of visiting Art Galleries and Museums is to do some research first and then target the rooms or the pieces you really want to study. That way you don’t get side-tracked and come away overwhelmed and perhaps disappointed that you somehow missed displays that you 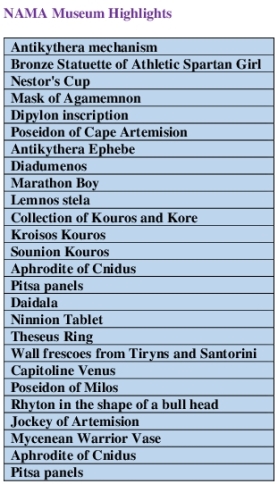 were looking forward to seeing. One method of preparing for a visit to NAMA is to collect a list of the most famous items in the Museum. For example, on the right is a list from Wikipedia. It is a great list and a wonderful place to start but if you are honest with yourself and can decide how long you can concentrate in a museum, this list is far too long for a 2-3 hour visit. I found another list of recommendations on a website that suggested only 7 highlights to inspect.

Both these lists mention as a ‘must see’ the Antikythera mechanism as a highlight of a visit to NAMA. I would broaden my survey of items on my next visit to include all discoveries associated with this famous ship-wreck. This Roman era ship full of loot, probably from cities along the coast of Asia Minor, sank off the Island of Antikythera in the strait between the Peloponnese and Crete. It was presumably headed for Rome or the Bay of Naples when it sank on a shelf off this island. It was discovered by sponge divers in 1900 and, based on coins recovered from the shipwreck, it must have sunk sometime between 85-60 BCE. It had on board statues and parts of statues (arms, legs, fists, fingers etc) that were almost three centuries old already when they disappeared below the surface, presumably taken from cities like Izmir, Pergamon and Bodrum. 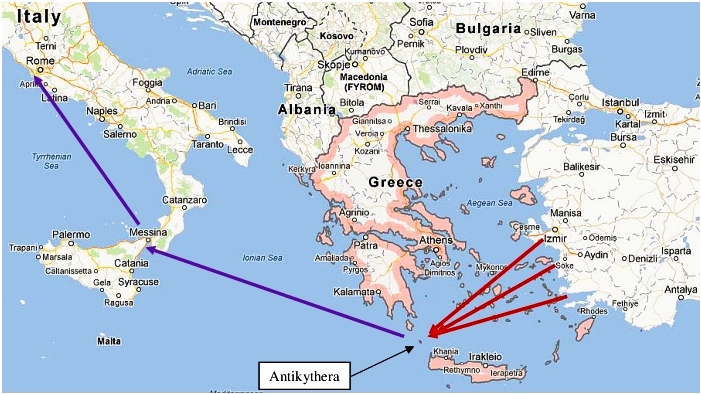 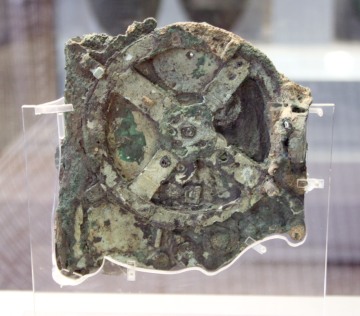 The wreck is most famous for the discovery of a device, now called the Antikythera mechanism, which is a hand powered clockwork device used to predict positions of stars and eclipses many years ahead as well as tracking the four- year cycle of the Olympic games. It is considered to be technology over a 1000 years in advance of any similar technology developed in the Western world and is sometimes described as an ‘analogue computer’. Whilst this device was probably considered very useful to the maritime merchants who owned this ship, it would have been the bronze statues on board that would have been the real money spinners of the trip.

We are probably more familiar with the great sculptures of Classical Greek Artists from the Roman copies that have survived in marble. The originals were often done in bronze and were highly prized. A small number of these Greek bronze statues have survived as they were generally considered more valuable for their bronze content rather than their artistic merit. They were  melted down and probably reworked into weapons, in opposition to the biblical exhortation to turn swords into plough-shares. Any bronze statues that have survived from antiquity have done so because they either jumped ship 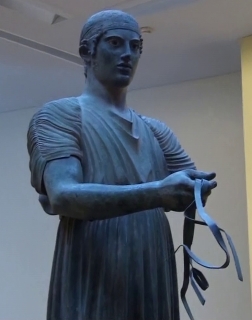 and spent the next two millennia under water or, like the Charioteer of Delphi (see image at left), escaped by hiding under a rockfall caused by an Earthquake in 373 BCE. None of the other large bronze statues in the Delphi complex survived. The exciting thing about the discovery of the Antikythera ship wreck is that amongst the discoveries in the first attempt to search the wreck, two, almost complete bronze statues were found. One of these, the Antikythera philosopher has 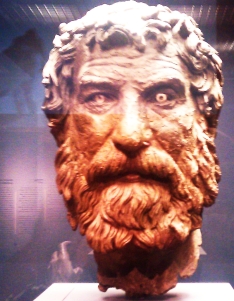 been dated from about 270 BCE and so has survived an amazing 2170 years under water, an ancient message to the modern world from Greece’s classic era. Of course he has lost his torso, one arm and other vital parts of his body but he is still looking great, if cynical, in Athen’s National Archaeological museum. It is guessed that he was part of a group of four public statues and so there may be more of his kind still waiting below the Mediterranean ocean for future archaeologists to find. 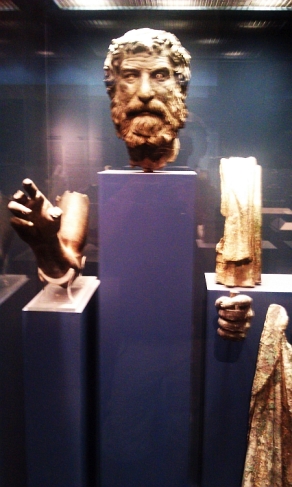 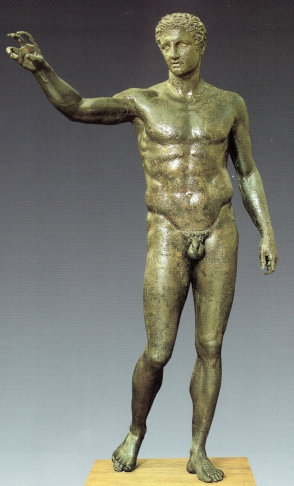 Another bronze statue rescued from the Antikythera Wreck which is possibly another 70-80 years older than the Stoic Philosopher is called the Antikythera Ephebe or ‘youth’. It is an almost complete statue of the handsome chap, once either holding the head of Medusa or the ‘Apple of Discord’ that triggered the Trojan War. 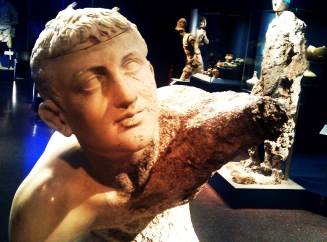 There were also a number of marble statues from the Antikythera Ship wreck that stand on display in NAMA. However, these statues have different barriers to survival over the millennia under water. The bronze statues suffer from physical damage caused by the sinking of the ship or if earthquakes dump rocks on them over the years. This was the 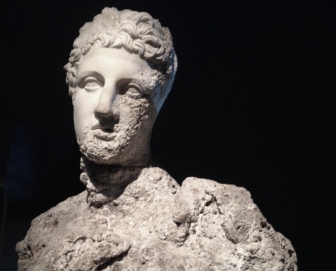 case with the Antikythera wreck. An earthquake off the island caused a boulder fall over parts of the wreck that today are a barrier to archaeologists. Marble statues might survive earth quakes but their surface, if not buried in silt at the bottom of the ocean, appear to catch a disfiguring cancer to their surface; victims of ‘flesh-eating’ sea organisms! The marble statue above left is of a boy, wrestling with the damage of time and an opponent who was either left behind in Asia Minor or is yet to be discovered at the bottom of the sea. 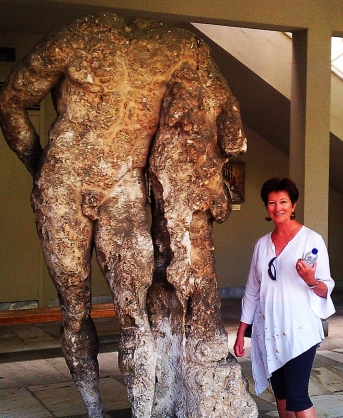 The statue of the beautiful figure of Hermes on the right above is lucky to have half his face clear of damage while the rest of his body was ravaged by the slow but constant attacks of marble-eating sea creatures…the rest of his less than attractive body is shown here to the right. This artifact is an example of a marble version of a statue from the middle of the first century BCE that is a copy of a many centuries older bronze statue. The statue of the horse below comes from about 100 BCE and only has some of its back preserved from the ravages of sea creatures. Its legs have broken off, perhaps by the earthquake that caused boulders to rollover him underwater. 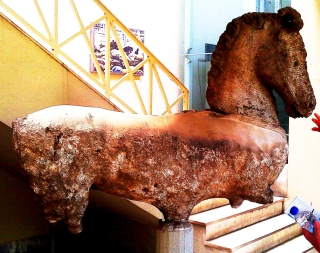 The pieces recovered from the Antikythera ship are ancient Greek masterpieces that have reappeared in the twentieth century after miraculously surviving a shipwreck over 2000 years ago. However they are not the only masterpieces to have survived ship wrecks in the waters around Greece. There are at least two other significant bronze statues that have literally surfaced again in the twentieth century and are exhibits in NAMA.

One of these is the Bronze Statue of Zeus (or perhaps Poseidon) found in 1926 in a shipwreck  off the Greek Island of Euboa. The statue is over two metres tall and is around two and half thousands years old, one of the oldest bronze statues recovered from antiquity. Its pose suggests that he was originally throwing a thunder bolt (or a trident if he was the God of the Sea!) and is considered one of the greatest treasures in this museum of treasures. Zeus/Poseidon are mentioned in both ‘must-see’ lists at the start of this article. 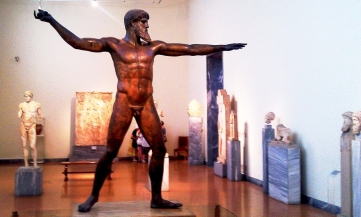 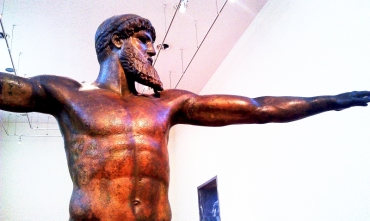 There is one last ‘Must-See’ artifact in NAMA that should be visited which was also recovered from the same ship-wreck that the bronze Zeus came from. It is called the ‘Jockey of Artemision’. The site of the original ship has been lost since 1928 so the same level of archaeological research has not been done on it as has been done on the Antikythera wreck. However it seems clear that it was another one of those merchant ships carrying ‘confiscated art pieces’ to major cities of the time where great wealth was available to buy such precious objects. The statue of the jockey and horse has been dated to around 140 BCE and the best theory of where it came from originally is Corinth, Greece. It may have been looted from this famous city by a Roman General called Mummius around 146 BCE and was on its way to Pergamon in Asia Minor when it went down. Corinth is not far from Delphi so perhaps this bronze statue of a race-horse might be very similar to the one that was destroyed by the earthquake in Delphi in the fourth century BCE. 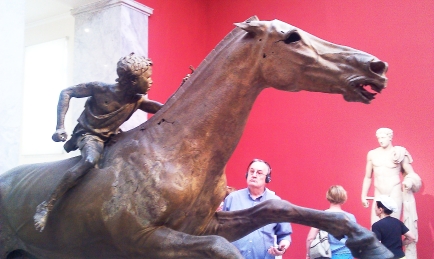 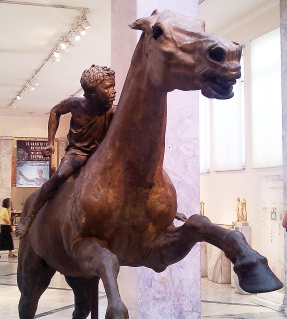 The National Museum of Archaeology in Athens is a fantastic store house of the artifacts recovered over hundreds of years that tell the story of Greece’s long and significant history. It is here you can find the pieces that tell the story of humanity’s first grappling with how to govern large groups of people in fairness to the majority. It is here you can find the art works that tell their story of humanity grappling with the nature of life and the after life. My focus in this article is to tour the great bronze artworks that have miraculously survived loss at sea or through earthquakes and can be gazed upon again by an admiring 21st century audience. It is my favourite museum in the world!