The Glacier Express train from St Moritz to Zermatt is publicised as the slowest Express train in the world…creeping along at a glacial pace! Despite its speed, it is famed as one of the most picturesque journeys in the world and while I can’t assert that there aren’t more picturesque train journeys somewhere else on the globe, this trip for me was the most interesting and visually stunning train journey I have ever completed. Here are some of my favourite sections of the trip. 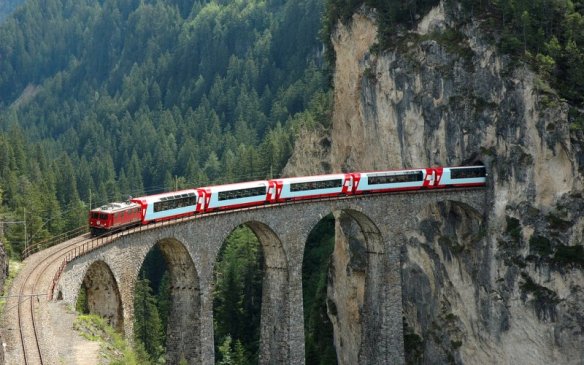 This is a section of the line on which we travelled on our way to St Moritz where we spent two days of our time in Switzerland. We then returned the same way, enabling us to have a better look at the dramatic landscape as we headed towards Zermatt. It is considered a “triumph of railway engineering” as well as being declared a UNESCO world heritage site. The six viaducts, the three spiral tunnels and the two ‘helical’ tunnels are enough to make your head spin as you make your way down the Valley, from one side of the river to the other. As can be seen from the map below, the Glacier Express train travels over and through the alps and mountain valleys of the southern cantons of Switzerland, from St Moritz to Zermatt.

This is a section of the train journey where I was sorry I was on the train; it would have been great to jump out and ride a bike through this glorious chasm. The train is fitted with facilities for earphone use and when

a new section of the route is reached, a bell rings and everybody rushes to put their earphones back on to hear information about this section of the journey that the train is passing through. I was particularly interested  to hear the info on how this ‘Grand Canyon’ style gorge was formed. After a massive rock fall into the river valley approximately 10000 years ago the river was blocked from following its normal course. Over time, the Rhine slowly wore its way through the collapsed rock and formed what is today called the Rhine Gorge. It is inaccessible to cars so it is a haven for wildlife and perfect for hikers, mountain bikers and rafters. Such lucky folk would hopefully view some of the wild boar and one or two of the 350 species of butterfly that inhabit the gorge.

One of the curious sights we admired 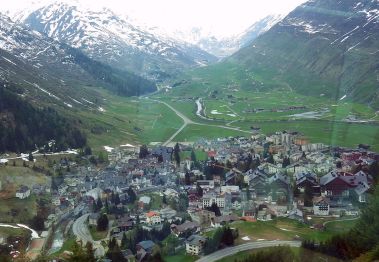 from the rail-line way above the valley floor near Andermatt was the construction of a new ski town with six hotels and other accommodation to cash in on the growing ski industry. There is also a golf course being built for those who still have energy left after a day’s skiing.

On the section of the journey before Brig, we were

given by the train’s audio, one of the most complex stories of the background history of this region of Switzerland. Back in the 17th century, two of the largest glaciers in the alps had grown to such an extent in this area that it was later referred to as a mini ice-age. When a section of one of the glaciers broke off and fell into Lake Marjellen, the water flooded down the valley, inundating villages in its path and killing citizens and destroying homes. This process continued over many years with regular devastating results for the locals. The villagers only recourse to nature’s vindictiveness was to pray and attend annual pilgrimages, asking God to reduce the size of the glacier. The villages of Fieschertal and Fiesch, being largely Catholic, appealed to the Pope for a prayer for this purpose and this has been part of their annual pilgrimage for the last 350 years. The prayers of the villagers appeared to be taking affect in the nineteenth century with the two glaciers beginning to recede.

Who would believe that religion and science would start to intermingle in the twenty first century? When the citizens  realised that the glaciers were retreating, causing local water sources to dry up, they decided that their prayers might be contributing to global warming. In 2012, they approached the Vatican to have their official prayer changed to ask for the glaciers to halt their retreat.

“Glacier is ice, ice is water, water is life,” explained the local priest in his sermon on the pilgrimage of that year. So it is curious that ancient practices are now addressing contemporary issues of global warming that sees Swiss Glaciers retreating by an average of 10 Metres a year. Their prayers are now directed towards assistance in stopping the devastation of Global warming and restoring the snow fall, the springs and the Glaciers above their town to a more balanced scenario that will see their mountain lifestyle continue.

The valley the Glacier Express drives through on the last leg towards Zermatt is unsurprisingly called the Matter Valley with the famous Matterhorn at the end of it. It was the usual beautiful and terrifying landscape that the train chugged through with the assistance of the rack rail. As we came closer to Zermatt, our helpful conductress pointed out a number of remnants of huge landslides that in the last twenty years have  boomed down from the valley wall cutting off the railway line and putting lives in great danger. At one of the avalanche sites, there were three or four huge square sections of the mountain that had wedged themselves not twenty metres from the train track and were too big to be moved in the cleanup.