Rome is such a large crowded, complex city that it is a challenge to get the best out of the experience of your visit. If you have only a day or two allocated to Rome on your vacation, this is not a problem; your guidebooks will send you to the Vatican, the Colosseum and the Trevi fountain and that will be enough. Perhaps you would prefer the summary tour of the ‘Red Bus’ circuit. Between the beauty and wonder of these sites plus the crush of the crowds, you will have little

energy left for anything else.

The Vatican is the major tourist site to visit in Rome. A guided tour is a reasonable idea as it will give you the major sites and issues in the Vatican Museums and in St Peters itself. It will last around three hours and is not for the visitor who wants to take it slow and ponder long over masterpieces; you will be left behind.

The map at the right gives you the main route of most tours of the Vatican and its large museums. With only a couple of days you don’t have any other option of a compact tour of this famous world destination if you also want to see some of the other major sights in Rome.

If seeing a bit of ancient Rome is also on your list, the two major sites are the Colosseum and the Forum. Both sites are huge and to see properly you need a guided tour and at least half a day each. However you stroll both sites without a guide if that is your preference; this is not an overly effective way to see the forum but a visit to the Colosseum without a guide is a reasonably satisfying exercise. If time is short and you like walking, the map below is a good route to see both these sites  without entering the precincts but still get a good sense of the amazing remnants of ancient Rome. 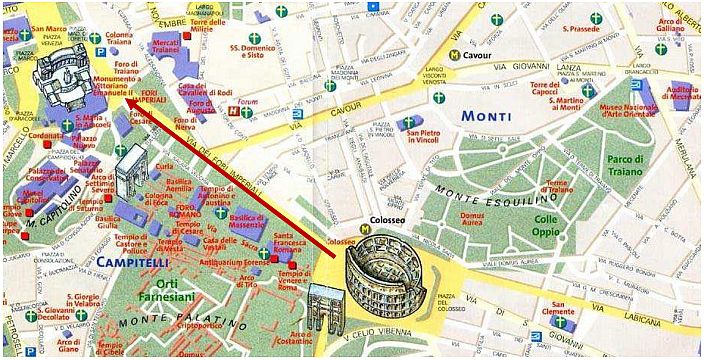 Depending on where your hotel is, travelling to this area 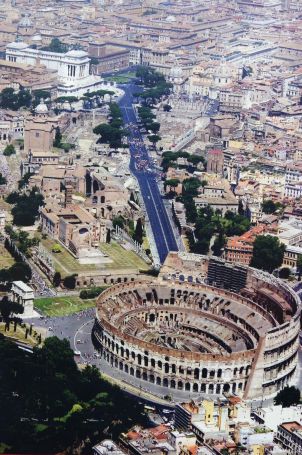 is probably best by Taxi. Taxi fares in Rome are not as expensive as in Australia. If you are confident with travelling the Metro, you can get out at the Colosseo Metro station. You can start by walking around the outside of the Colosseum…there is plenty to see. You can then walk down Via dei Fori Imperiali towards the ‘Wedding Cake’ monument that you will see in the distance. (Victor Emmanuel Monument). There is much to see on both sides of the road.

If you have chosen to have such a big first day in Rome, you will sleep well that night.

If you have one day left, some strolling around some of the famous areas of Rome might be the go, giving yourself time to linger and appreciate what you are seeing; time to sit in a café and watch some of the Roman world pass you by.

Of course any starting point for a walking tour of Rome is arbitrary so my suggestion that you get your taxi driver to drop you off at Ponte San Angelo (Bridge of the Angels) could equally be replaced by many other famous centres in Rome. My argument for this starting point is that it is spectacular, no entry fees unless you want to enter the Castel itself and no visit to Rome is complete without standing on the bank of the Tiber River and watching the boats go by.

Although overshadowed by St Peters, Castel Sant Angelo is one of those crucial sites in Rome that is a crossover between ancient Rome and the history of the Popes over the last 2000 years. Originally built as a mausoleum for Hadrian, it became a fortress castle for the Popes and featured in many events associated with Papal history. Checking out the passageway that connects the Castel with St Peters is one inspection walk you can do here. Walking the Bridge of Angels, the famous name of Bernini will come up again as the head of the sculpture school that produced the amazing angels on the bridge. If you did the Vatican tour the previous day, you would have heard his name many times, particularly for his role in the construction of the welcoming piazza and the production of the ‘Baldacchino’ over the high altar in St Peters.

After spending sufficient time at the bridge over the Tiber start your walk towards Piazza Navona, stopping briefly to check out the church of Santa Maria della Pace on the way. You will have many opportunities to visit some of the beautiful churches of Rome today so your background and interest in Church history and architecture will determine the length of the visit.

A slow stroll around Piazza Navona is an essential feature of any trip to Rome. Stop and have a coffee! The area was originally a Roman hippodrome, so its shape was predetermined by its original usage, now many metres below the current ground level. Its three central fountains will repay slow inspection, particularly the Fountain of the Four Rivers by our ever-present master, Gian Lorenzo Bernini. (Notice he found room for a spare Egyptian Obelisk that wasn’t being used at that point.) His fierce rival of the time (16th century), Francesco Boromini, is responsible for the church that sits next to Bernini’s fountain, Sant Agnese in Agone, both masterpieces competing for the attention of the traveller’s interest.

It is a short walk up through the narrow alleys 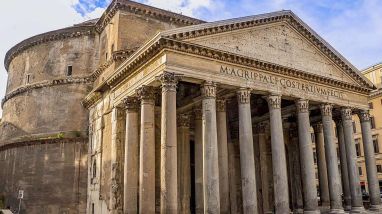 of the area to our next eye-popping architectural masterpiece of the ancient world. Like so many of the treasures of Rome, it started life as a Roman temple. Marcus Agrippa built the original temple and his inscription still survives on the front of the building. “Marcus Agrippa, son of Lucius, made [this building] when consul for the third time.” It was rebuilt by Hadrian and has survived because it has remained in continuous use ever since. It was converted to the Catholic Church, St Mary of the Martyrs in the seventh century. It is an amazing piece of architecture, its dome for example only surpassed in size by Christopher Wren’s dome for St Pauls in London from the mid seventeenth century.

There are many churches in Rome worth a visit but Santa Maria Sopra Minerva for me is is one of my favourites, perhaps because of the sheer eccentricity of another Bernini sculpture that sits outside the church; an elephant with an Egyptian obelisk on its back that dates from seven centuries BCE. Like so many other churches in Rome, it was built over an old Roman temple. Its interior is worth a visit for many reasons, not just for the Michaelangelo statue of Christ the Redeemer.

In visiting Rome, you need to be ready for some steady walking and good shoes are essential. If your feet and shoes have held up today, have one last stroll across to the Trevi Fountain, Hollywood’s favourite romantic site in Rome. If you are superstitious or simply want to return to Rome, throw ‘Three coins in the Fountain’ and have another ‘Roman Holiday’!

Perhaps you have more than a couple of days to spend in Rome or you threw a coin in the Trevi Fountain and are returning to see more of the eternal city. Maybe you are a compulsive ‘Romaphile’ and you return every few years. Set out below are some links where there are suggested itineraries that presume much more time available and a particular interest in Roman history, Church history or just a barely developed obsession with getting to know as much about the city and its culture as possible.

The Bernini Tour of Rome…Part 1

The Bernini Tour of Rome…Part 2