Walking the Brooklyn Bridge and the High Line

While visiting NYC, we went for long walks through the picturesque neighborhoods of two well known tourist attractions. On one of the days we walked across the Brooklyn Bridge to the curiously named suburb over the East River, ‘Dumbo’! On the second day we caught the train to Chelsea and walked along the old converted train line called the High Line which meandered its way for 2.7 Kms along the Hudson River through Greenwich Village, Chelsea and Lower Manhattan. Both these tourist destinations took a lot of walking energy to complete but the challenges didn’t deter us or the large number of visitors who were completing these two walks at the same time as us. These two excursions were connected….at the end of each walk, we made our way to cafes from the same franchise, Bluestone Lane, cafes started by an Australian entrepreneur who decided that NYC needed a better coffee. We agreed with him.

Both these tourist attractions involved old sites where their original functions has been undermined by the passage of time and the ever increasing demands of modern business and its supporting technology. Brooklyn Bridge’s relevance has certainly diminished as these days it only takes standard car traffic but no trucks or commercial vehicles are allowed to cross it. Its function of transporting citizens from New York to Brooklyn and back is still relevant but contemporary demands have meant that extra bridges and traffic tunnels have had to be built. The Brooklyn Bridge now has a pedestrian and bike path built on top of the vehicle traffic lanes which weren’t part of its original design. The big change in modern commercial usage of this bridge is the tourists walking across it, taking in the fantastic views of the New York skyline, have added huge value to this New York icon.

The High Line is basically a long, narrow ‘walk in the park’. This park is built on an abandoned viaduct section of the old New York Central Railroad that ran beside the Hudson River through the old ‘Meat Packers’ district. It is old, expensive transport technology that simply stopped being useful for its original purpose and so its owners eventually gave it away to the New York City Council. It’s re-purposing as an urban park has been financed by the community but has ‘flowered’ as a site for local citizens and tourists to escape the urban concrete jungle and walk/run through a natural environment that repays the effort at all levels. Walking the High Line is stimulating as the contrast between the environment of the walkway and the surrounding urban environment is quite sharp. The High Line provides the walker with opportunities to explore…

The Brooklyn Bridge took 14 years to build from 1869 and was the world’s first steel wire suspension bridge as well as the first ‘fixed-crossing’ of the East River; early European citizens paid native Americans in ‘wampam’ (beads) to be canoed across this river. Apart from its transport functions, the bridge is a tourist attraction because it is simply an amazing human building achievement as well as a way for providing the walking visitors magnificent views of the urban architecture of the island of New York and the riverine landscape of its surrounding waterways.

I noticed some online tourist referrals to the Brooklyn Bridge 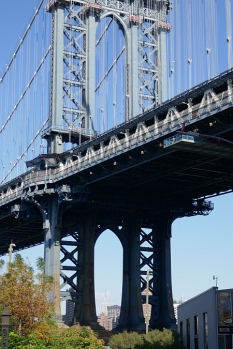 Walk suggesting that a walk to the first pylon is all a tourist needs to do. The complete walk is 1.6m long and so should be well within the ability of reasonably fit walkers. The main danger is of course the crowds of tourists who spill onto the bikeway and so pose a danger to the riders and themselves. A walker intent on getting the best ‘selfie’ whilst laying down on the walkway oblivious to those stepping over him/her are a peril to all travelers.

Getting to Dumbo is an achievement in itself and if you have plenty of vim left, you can walk in the parks along the river as well checking out the great views back across to New York. Getting photos of the Manhattan Bridge with the Empire State Building in the background is also a popular attraction. If you are a fan of the great poet Walt Whitman (1819-1892), ‘America’s Poet’, you can visit his memorial park up the hill from where the bridge-walkers arrive on Brooklyn shores.

is always  a pleasure for those hunting the eccentric. On the way to the High Line I couldn’t help but notice the curious offering in the window of a Spa shop where they would happily place a candle in my ear, light it up with the promise of “soothing pressure and pain relieving sensations, mainly in the ear and head regions.” I resisted this tempting offering and headed for the steps up to the High Line walkway.

I suggested earlier in this article that the High Line enabled us inquisitive walkers to recognise five themes in the built environment around us. Looking at the theme ‘A place for citizens to exercise and children to play‘, it was very evident to us that this walking trail was very popular with teachers as there were at least three or four school groups out for a walk, representing all the age ranges of possible students. These groups appeared to be enjoying themselves and no doubt couldn’t help but learn plenty on this excursion.

I suppose I took for granted the ‘landscape architecture‘ and ‘Creative urban design‘ that was evident all along our walk in the re-purposing of these rail tracks. The fact that the High Line blended in with the wide variety of buildings we were passing was taken as a ‘given’. To give one example, a little over half way along the High Line we came to the 10th Avenue Overlook where the architects realised that many of us would appreciate a rest, a seat and time to check out the hurrying world below us on ground level. One of the historical notes we were provided with explained that 10th Avenue had an appalling urban reputation back in the 19th century, being dubbed ‘Death Avenue’. Apparently 100s of pedestrians were killed on this street and in the surrounding area so everybody wins with the High Line; reducing pedestrian death rates is a significant result for any community.

The High Line is also an outdoor, albeit narrow, Art Gallery. Art pieces were everywhere along the walk as well as on the building walls we passed. The creativity of local artists led us along as our path, tracking the skyscrapers that beckoned us forward throughout our hike. The most ambitious architecture seemed to be the buildings in the Hudson Yards redevelopment project towards the end of the High Line. Two of the buildings are to be found in the images below. The most unusual and the most controversial structure there is the 16 storey building called ‘The Vessel’. It is a structure of connected staircases that sits in the Hudson Yards Public Square in front of the new shopping centre that has been recently built as well. Entrance is free as long as you can manage the process of downloading a ticket onto your phone from the electronic ticket booth before you enter. The view from the top provides great views all around the area from the Hudson River to the abandoned grave yard of old train carriages. If you are happy to climb to the top, just remember the elevator is only for those needing wheelchair access to the top floor so your knees better be in good shape for the journey down. Whilst The Vessel has received high praise for its unusual design and purpose, it has also been criticised as a “stairway to nowhere” and “a piece of junk”. Architects and artists can’t

please everyone but the mixed crowd of visitors there the day we explored ‘The Vessel’ seemed to be pretty happy to be led astray by a playground that appeared to be inspired by the mazes of dutch artist M.C. Escher. 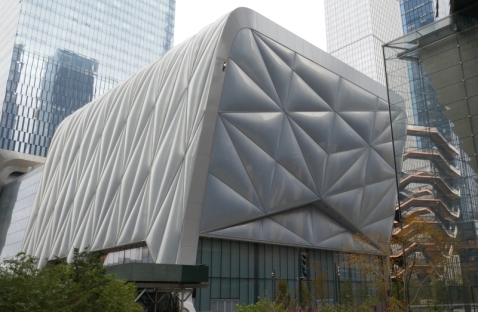 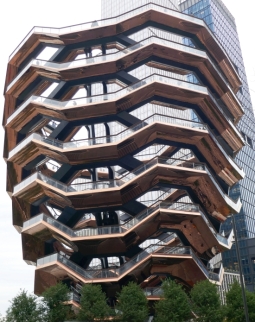 The last section of the High Line took us down to the Hudson River and back to West 34th street. As can be seen from the image above, ecological development is very difficult in a crowded city like New York so we appreciated the beautiful gardens that lined the High Line from West 12th Street all the way to the Hudson yards. As the last section hasn’t been finalised, the developed gardens gave way to vegetation that had been allowed to self-seed and illustrated that nature doesn’t need too much of an opportunity to take over any open undeveloped ground.

So….looking for two vigorous outdoor activities for your time in New York? We can highly recommend the Brooklyn Bridge and the High Line walks, particularly if you are able to relax at the end with a great coffee and lamington at a Bluestone Lane Cafe such as the one pictured here near the corner of Prospect and Adams St in Dumbo, Brooklyn!

GUERRILLA GIRL: I only hope that the art of the High Line implemented the third principle of the ‘Guerrilla Girls’ manifesto! “Thou shalt show and collect lots of art by women and artists of color BEFORE they are dying or dead!”