I would contend that there would not be many Australians with much interest in the Middle Ages history of the countries surrounding the Baltic Sea. Coming from an Irish/English heritage, my school and university studies were always about English history, particularly as it applied to the colonisation of the Great Southern Land. The Middle Ages for me were centred on English Kings and Queens, particularly those celebrated in Shakespeare’s plays. When we visited Stockholm in 2018, all this was to change. It wasn’t a highly colourful book or an intriguing video that converted me, it was a visit to the VASA Museum.

When I heard that we were going to the 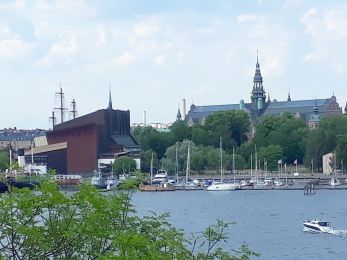 VASA Museum, I thought it was going to be about ‘sea-faring’. It was about one ship! How could a museum built around one ship become one of the most visited places in Scandinavia (35 million visitors so far!). I suppose you have to visit it to find out, but for me it was the story of the reappearance of a ship that had disappeared inexplicably beneath the waters of Stockholm harbour in 1628; a wooden ship that is nearly 400 years old and is so large and intact that there is only room for one ship in this museum. If the ship itself wasn’t so fascinating, the visitor may be more beguiled by the story of its construction, its swift sinking and its reappearance above the waters in 1968. How does a wooden ship of such complexity reappear again after so long to tell its story to the 21st century?

The King of Sweden, mentioned in the earlier piece about Stockholm, Gustavus Alphonsus, ordered the Vasa built to be a key component of his 1620s war against Poland and Lithuania. It was meant to be a major symbol of his military power and was designed to give that impression to his enemies. Unfortunately, it was built too top heavy with an ornate upper structure and too narrow a keel for the vessel. The King’s subordinates didn’t know how to bring their design fears to the King’s attention who was demanding that it quickly join his fleet. It was so unstable that it blew over and sank, not long into its first voyage. Such was the King’s power and sensitivity to any criticism, the inquiry into its sinking, while clearly acknowledging the faults in the ship’s design, found nobody to blame. The result of this hugely expensive failure and the blame being ‘brushed under the carpet’, the story of the Vasa has a very modern ring to it. 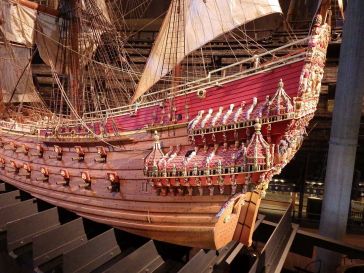 So this early 17th century highly complex wooden ship sat at the bottom of Stockhom harbour for over three hundred years, preserved in the Baltic Sea water. After having survived for so long, it nearly didn’t make it above the water again. As a poster at the museum says; “Overtime her location was forgotten, but in the 1920s, a group of divers applied for permission to blow up the wreck and salvage the black oak timbers. During the 1950s, a private researcher, Andres Franzen, began to search for her. He knew that wooden ships are preserved in the brackish water of the Baltic. In more salty water, wood is rapidly destroyed by the shipworm, Teredo Navalis.” Like Roman Pompei, it sat patiently waiting to tell its story to the modern age. The problem with bringing hidden treasures to the light of day and its polluted atmosphere, resurrecting the Vasa meant immediately preserving it so that it didn’t fall to pieces before the wondering eyes of twentieth century visitors. Sometime uncovering the past is the first step in its destruction as Pompei is starting to show. 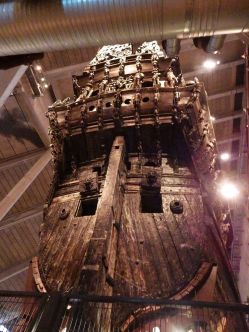 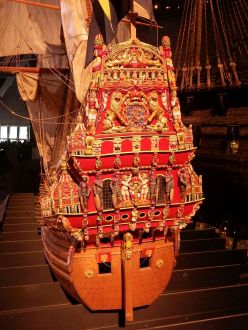 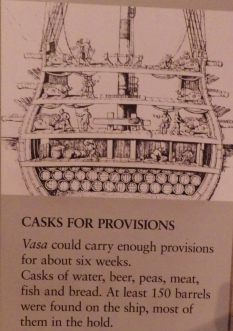 The story of the recovery and preservation of the Vasa itself is an interesting and complex story. The Vasa was deeply buried in the mud of Stockholm’s highly polluted harbour and it took the Swedish Navy five years to slowly dig under it and begin the slow lift to the surface. The ship was remarkably preserved in many ways and even the polluted waters assisted by ensuring that microorganisms struggled to survive in this water. However the iron bolts holding the ship together were amongst the first to disappear so a lot of work had to be done initially to stop up or shore up holes so the lifting process wouldn’t cause the ship to fall apart. Once it reached the surface it had to be kept moist to stop immediate deterioration and then sprayed with polyethylene glycol. The Vasa was housed in a 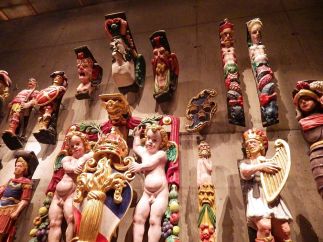 temporary dry dock on the harbour Island, Beckholmen, and from 1961 to 1988 it was housed in a covered ship yard while restoration and conservation work was carried out.

The VASA museum displays not just the restored sailing ship but the many archaeological finds recovered from inside and around the ship on the floor of the harbour. A fully supplied ship on its maiden voyage was a treasure trove of the 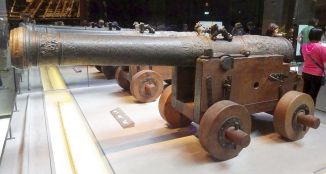 material necessary for a large ship to go to sea and the armaments needed to fight sea battles. Even some of the sailors below decks didn’t escape the sinking and their bones, preserved by their clothing material, are on display. The ship was also covered in sculptures that must have added significantly to the cost of building the ship.

The morning we visited the VASA museum it was very crowded, particularly with children who appeared to be enjoying the mystery of this restored middle ages fighting ship. There is much to see and of course information fatigue sets in so to do such a museum justice, it is worth visiting more than once. For the history and archaeology interested tourists, this museum has got to be on your bucket list!