We visited Victoria, the capital of British Columbia on Vancouver Island in February of 2018. Unlike the ski fields east of Whistler, there was no snow on the ground in Victoria; as Canada’s most southern city, it attracts retirees because of its temperate climate. However, at the end of our third day in Victoria, it started to snow heavily and the Jamestown area near our hotel (The Inn at Laurel Point), on the Inner Harbour was blanketed with white before the day faded. All the major landmarks of the city were transformed. Our photos over the four days in Victoria revealed before and after shots in splendid contrasts. Perhaps the most beautiful image of our time in Victoria was the above photo of the Outer Harbour as the sun rose the morning

after the unexpected snowfall.

On the Downtown side of the Inner Harbour of Victoria, I was amazed to find a familiar figure from my own country’s historical background. Standing there like an old friend was a statue of Captain Cook, the first European to encounter the east coast of Australia in 1770. I had not realised that 7/8 years later he was sailing the Salish waters of western Canada. The plate on the statue’s pedestal reads as follows…

After two historic voyages to the south Pacific, Cook was cruising the waters of the Pacific northwest on his third and final voyage. With his two ships, Resolution and Discovery, he was searching for the western exit to the legendary North West Passage. In March 1778, they put into Nootka Sound for repairs and to trade with the native people. With him on the voyage were Mr William Bligh as Master of the Resolution and Midshipman George Vancouver.

The statue was commissioned by the Victoria Environmental Enhancement Foundation and unveiled by the Honourable William Richards Bennett, Premier of the Province of British Columbia.

Like all other landmarks in the city, he was soon to have a muffler of snow.

Unlike his discovery record in the south seas, Cook wasn’t the first European navigator to explore the seas around Vancouver Island. This record belongs to Juan Perez, the Spanish Explorer who encountered communities of Coast Salish peoples here in 1774. The first European occupation arrived nearly seventies years later in the form of a British trading post in 1841 led by James Douglas who went on to become both Governor of Vancouver Island and British Columbia. Like California and the east coast colonies of Australia, Vancouver Island and British Columbia were to be forever changed by the discovery of gold in the hinterland and that would be the end of the peaceful existence of the Coast Salish People.

One of the advantages of staying in a hotel on the point that separated the Inner and Outer Harbour, we were not far from all the key sites of the city of Victoria. For example, we were a five minutes walk from the amazing building pictured below. As ignorant Australian tourists, we did not know that Victoria was the capital of British Columbia (not Vancouver!) and this amazing building, constructed in 1898, was the State Legislature. It was also in session while we were there which may have explained the constant sea-planes that landed on the Outer Harbour, taxied past our window and presumably dropped key politicians on the foreshore with only a five minute walk to work.

For the first two days of our visit, we walked past this wonderful,

green domed building as we headed to explore the downtown. If our eyesight had been telescopic, we would have noticed the gold statue of Captain George Vancouver on the central dome, not only famous as one of James Cook’s companions, but also one of the first European explorers of the waters of British Columbia. Like the rest of the city, when the snow fell, the State Legislature disappeared under its snow blanket, giving me the opportunity to wander the surrounding streets and capture the photo below of the Victoria Centennial Fountain that welcomes visitors to the back entrance of the State Legislature. It was activated in 1968 to mark 100 years after the four colonies that came to make up British Columbia combined under one legislature. There are four beautiful symbols of native animals attached to the side of the fountain representing the original four colonies; the Bear, the Wolf, the Raven and the Eagle. 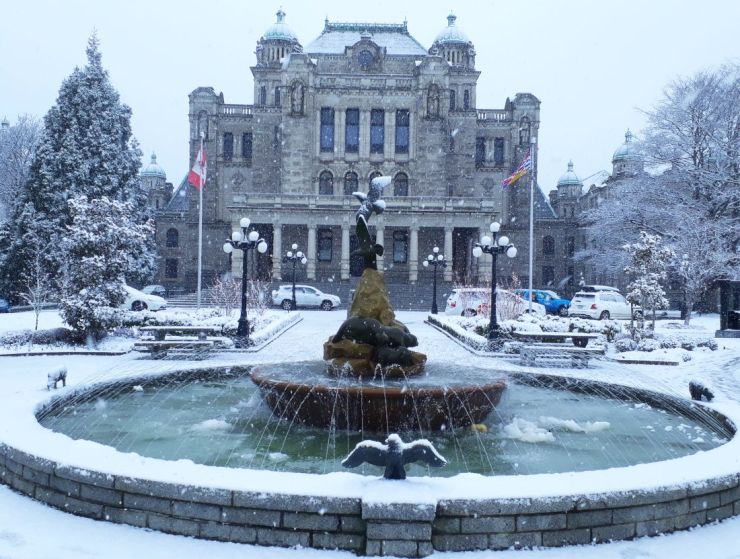 The Map of central Victoria

On one of our days in Victoria we spent the morning at Butchart Gardens where we were introduced to actual size topiary statues of Canada’s native animals. We also encountered these same curiosities on Belleville St just down from the State Legislature Building. On a sunny day, the topiary horse below looks ready to move on but that night, its friends the deer in the next garden, looked like they had been frozen solid, stooping to graze on the disappearing lawn. 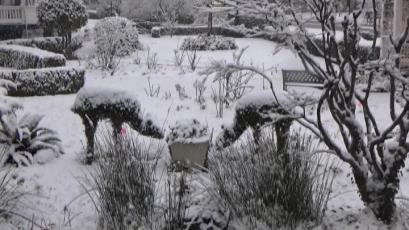 Overlooking the Inner Harbour of Victoria is the

other highly esteemed building of the city, the Empress Hotel which opened in 1908. It is one of the oldest hotels in the city, giving the impression of an old French Chateau lost in the wilderness of the new world. It is a Grand Railway Hotel built by a division of the Canadian Pacific Railway company and is a National Historic site. We decided that we would go for a wander through the hotel’s public areas and we couldn’t help but walk quietly and respectfully due to the “refined atmosphere of elegance and old-world charm”. The gardens of the hotel were also worth a visit and this was where we encountered the statue of a seated lady with a monkey on her shoulder and a ‘Toto’ dog at her feet barking at the monkey. The plaque explained that this was…

how eminent Emily Carr was, she still looked very cold out in the snow when I visited her later on the afternoon of the snow storm.

Over the road and on the opposite corner to Emily Carr stood a much older art-form. On the corner of the Inner Harbour stands the Kwakiutl Bear Pole, erected in 1966 as another celebration, like the fountain at the back of the Legislature Building, of the 100 year anniversary of the union of the colonies in 1866, the formation of British Columbia. Another impressive, commemorative Totem Pole sits over the road further along in the grounds of the Government Buildings. It is called the ‘Knowledge’ Totem Pole and was carved and erected to honour the Commonwealth Games held in Victoria in 1994.

Across the road from the Empress Hotel is situated the Royal BC Museum and surrounding it is the museum’s cultural precinct. Part of this cultural precinct is Thunderbird Park which is the home to many totem poles and other First Nation monuments. The city has been trying to come to grips with the conservation of the aboriginal art of Victoria’s first peoples since 1941 when this park was opened. The state of the totem poles erected in this park is one example of the success of this programme. If you continue further up the hill towards the sea, the visitor will enter Beacon Hill Park which has many attractions, one of them being the tallest totem pole in the world.

We thoroughly enjoyed our time in Victoria on Vancouver Island, not just for the gorgeous sites of the centre of the city but also for the dining out experiences that awaited us at the end of each of our days there. Rather than head directly home to Australia, we caught the daily ferry to Seattle and spent three days enjoying the Emerald City across the southern border.