(Reader Warning: There are a lot of expletives quoted in this article such as the “f…” word…they are contextually necessary. Please do not read any further if you are offended by abbreviations of inferred swear words.)

Bruges is one of those towns in Europe that many Australians have heard of but few have visited. Most people would struggle to decide if it was in Germany, Holland or Belgium. Any fame it has outside of the Low Countries has probably come from the “Anglo-American, neo-noir black comedy crime drama” film (Wikipedia) ‘In Bruges’ that achieved one Oscar nomination in 2008. Having seen and enjoyed the film for its dark comedy, I knew that Bruges was an old medieval town of significant beauty. I now know it is in Belgium because it was fortuitously included in our trip to Europe in 2016.

If we had arrived in Brussels by plane rather than 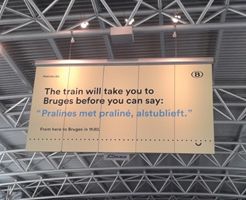 train, we would have had our first report of Bruges through an advertisement tied to the ceiling of the airport terminal. Whilst it would have been reassuring to hear about the speed of the train trip to Bruges from Brussels, not speaking Flemish, I would have been confused by the phrase, “Pralines met praline alstublieft”. It literally means, Pralines (a local nuts, chocolate and cream confection) with praline, please.” The sign would have made me question both the lack of ideas from the Bruges Tourist Bureau’s Advertising Department as well as starting to realise the extent of Belgium’s love affair with all things chocolate.

In a strange sense, the film ‘In Bruges’ may have been the best advertisement ever for the town of Bruges. Although the main characters are all contract killers to varying psychotic degrees, two out of the three of them love Bruges for its beauty; the third one, who as he lay dying at the end of the film, thinks to himself…

There’s a Christmas tree somewhere in London with a bunch of presents underneath it that will never be opened and I thought that, if I survive all this, I’ll go to that house, apologise to the mother there and accept whatever punishment she tells me…Prison? Death? Didn’t matter…at least in prison and at least in death, you know, I wouldn’t be in f… Bruges! But then, like a flash it came to me and I realised, f… man…maybe that’s what hell is, the entire rest of eternity spent in f… Bruges.     …And I really, really I hoped I wouldn’t die.

It is easy to dismiss Colin Farrell’s character Ray as a contract killer of little cultural understanding, not so much the other two killers. The crime boss Harry (Ralph Fiennes), whilst being an extremely offensive, twisted individual, is highly principled as well as holding a great love for the city of Bruges. In his dialogue with Ken about whether Ray is enjoying being in Bruges, this is made clear…

Ken, the other aged contract killer, is clearly quite moved by the sights of Bruges and but for fate, would have gone on to have the best two weeks of his life strolling its streets.

Given that I didn’t know where we were staying in Bruges, I was very impressed by the hotel we arrived at, straight from a 5-minute taxi ride from the station and a two minute drag of the suitcases over the dreaded cobblestones as the front door of the hotel was not accessible to the taxi. It was called ‘Hotel Relais Bourgondisch Cruyce’ and it was right beside the canal in the centre of the city. 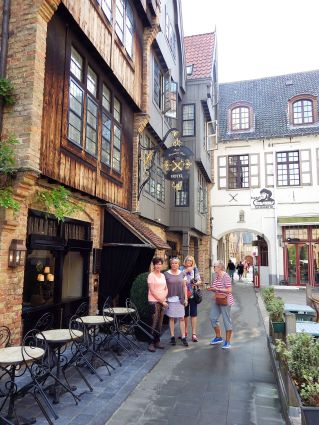 The hotel had little tables outside where we could have afternoon tea or gather for sunset drinks at the same time as watching the boat-tours pass by or the swans arriving, looking for comfort food. The only problem with having prime seats for canal watching was that other folk would wonder along our dead-end street, check out our view, check out our gorgeous hotel and at the same time interfere with our private experiments in deciding which was the best ‘Cherry Beer’ to be had in Belgium. What we didn’t know, or couldn’t have believed, is that our fabulous travel consultant (who was touring with us) had booked us into the hotel which was one of the main settings for our favourite film set in Bruges: ‘In Bruges’. It was on the very narrow, winding stairs of that hotel that the gorgeous, pregnant landlady had stood in the path of one psycho killer, preventing him from going up the stairs in order to shoot another psycho killer. (saying “This is my hotel and you can F…off!”) How little would we have enjoyed our cherry beers outside the hotel if we had known that crazy Ralph Fiennes had leant over our railing in order to shoot the fleeing Ray in the back; our hotel was so conveniently located that Ray had been able to jump out of his bedroom window and into a passing boat!

One of the first things Ken the contract killer did was take a boat tour of Bruges. We however took the red bus tour, one of the best ways to get to know a new city and then choose the places you really need to investigate more closely. It started out in the main plaza (Markt), not far from the famous bell-tower of Bruges. It is probably famous in the 21st century for its pivotal role in key scenes in ‘In Bruge’. However in the 19th century it was visited by the most popular American Poet of the day, Henry Wadsworth Longfellow, the writer of such poems as ‘Paul Revere’s Ride’, the ‘Wreck of the Hesperus’ and the ‘Song of Hiawatha’. On one of his tours of Europe he visited Bruges, stood on top of the tower, and had a vision of the long history of the town.

In the market-place of Bruges stands the belfry old and brown;
Thrice consumed and thrice rebuilded, still it watches o’er the town.
As the summer morn was breaking, on that lofty tower I stood,
And the world threw off the darkness, like the weeds of widowhood.

While our group were not prone to poetry or visions in the market square, our one-hour bus tour convinced us that bikes were the way to see the best of this city. As a medieval city, Bruges is round and surrounded by canals and the remnants of the old defensive walls. Some of the gates of the old walls are there but bike riders have free rein to cycle around the edge of the city beside the canals where the old walls once stood. As a bike rider with a free morning you can stop at the beautiful Queen Astrid Park with its small lake and fountain (as long as you don’t recall that this is where Ray was interrupted in his suicide attempt by Ken’s arrival to shoot him) or watch the canal locks work as barges make their way around Bruges. If you get tired of the perimeter you can then dart back along beside one of the connecting canals to places like the Jan van Eyck square, have coffee and cake and philosophise over the waters of the canal (as Ken and Ray did in quieter moments). 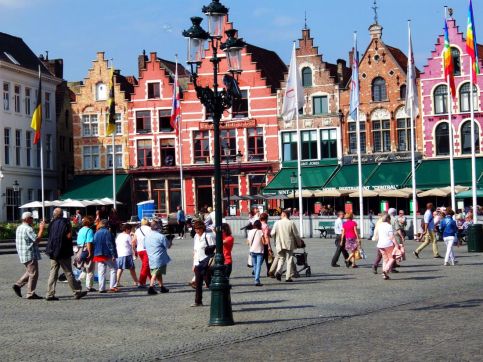 The history of Bruges tells us that it was at its height of wealth and power from around the twelfth century until it started to fade by the end of the fifteenth century. At that time it had a tidal inlet (The ‘Golden Inlet’!) connected to the North Sea and its strategic placement meant that much trade flowed into the city. The so called ‘Lake of Love’ on the edge of Bruges today is reputed to have been able to hold a 100 ships in its heyday. The fact that in 2016 the North Sea is 20kms away explains what happened to Bruges; it lost the connection to the North Sea and so it lost its strategic trading position to Antwerp

The whole structure of the city of Bruges is a hangover of its 15th Century heyday. However one specific aspect of its history that is still very clear today is the presence of so many swans gliding its canals. This curiosity stems from 1477 when Queen Mary (the ‘Rich’!) married Maximillian, the son of the Holy Roman Emperor. Sadly for Flanders, Mary died in a horse riding accident in 1482 leaving her subjects at the scant mercy of Max who went on to become the Holy Roman Emperor himself. He was not well liked by the locals and two unsuccessful, complex revolts against him (one in which he was imprisoned in Bruges in 1488) led to a savage impost on the city; they were required in perpetuity to maintain swans on their canals. Understanding the nature of this insult is generally missed by non-Flemish but it’s got something to do with the word “Lanchals”, the name of one of Max’s officials who had his neck

chopped by the annoyed Bruges citizens, is the same as the Dutch word for ‘swan’. Having to keep “long-necks” on the town waterways for evermore was meant to be a constant reminder of their perfidy and shame! Five and half centuries later, there is little sign that the locals have anything but pride in their local swans; the swans were given the ultimate compliment in 2006 by being promoted as the official city chocolate emblem (Brugsch Swaentje) of Bruges.

Bruges is a great stop as part of any trip to France and the ‘Low Countries’…our group nominated it as one of their favourite memories of the trip! 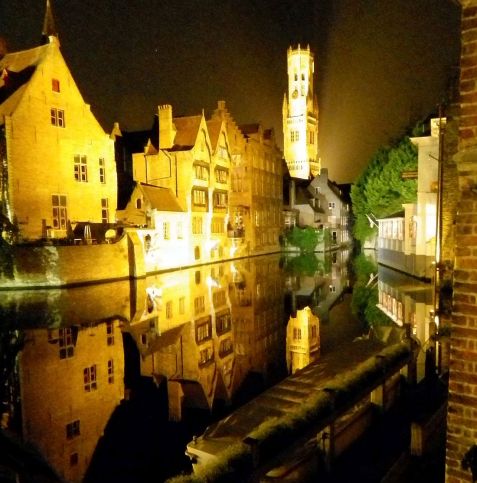