On our first full day in Budapest, we decided to walk from where we were staying at Hotel Corinthia and head down towards the river. Our destination was the Great Synagogue, number one on our list of the recommended sites to see in Budapest. Heading straight to the river took us through the Jewish Quarter of Budapest and a bit of map-reading showed us that we would be passing some of the ‘Ruined Bars’ that we had been encouraged to visit by our guide on the previous

day. The Ruined Bar movement began in the early 2000s when young people were looking for places in the city for affordable nights out. The old Jewish quarter had a lot of abandoned or derelict buildings and a few creative entrepreneurs set up their grunge bars with fringe art and second-hand furniture. It was a concept that has caught on but you wonder how long it will last when tour operators now descend on them after dark with bus loads of tourists. We enjoyed our look around the empty bars (it was too early in the morning to get  a drink!) before we headed through a market place and on to our destination, the Great Synagogue. 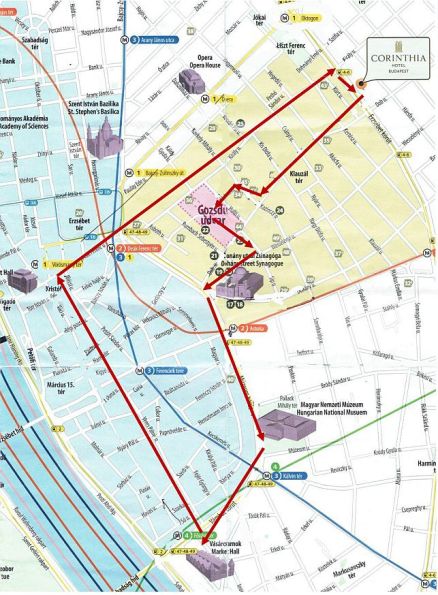 come to fruition when it starts to rain and the queues for your first destination go around the block; buying tickets after standing in the rain for ages is not conducive to happy campers. We decided to move on and try our next destination, the Hungarian National Museum, number 6 of our list’s destinations; at least we would be out of the rain.

The major exhibition at the Museum was the Seuso Treasure. It was not just a show case of ancient Roman silver tableware, it was a hoard that was found back in the 1970s and has been under legal action for many years over its ownership. Its back story illustrates the huge problem of theft from archaeological sites all over the world and the trading that goes on in these stolen goods between wealthy individuals, museums and national governments. It is believed that the original character that found the hoard was murdered for his troubles and the collection of 14 silver pieces of tableware and the copper cauldron used for hiding them disappeared in commercial vaults before they were eventually sold on to a consortium led by a wealthy Englishman using false provenance papers. When they were subsequently offered for sale at Sotherbys, the whole process ended up in the courts with three different countries claiming the hoard was stolen from an archaeological site in their patrimony. The Museum’s website explains the end of the story… “Lawsuits, scandals and unsuccessful auctions marked the last 25 years of the treasure’s modern history. The Hungarian State fınally came to an agreement with the persons possessing the Seuso treasure and all the 15 pieces was repatriated to Hungary recently.”

The Seuso treasure was apparently originally owned by a fourth century citizen who lived in the Roman province of Pannonia, part of modern day Hungary.

The rest of the Museum exhibitions dealt mainly with the period from the arrival of Stephen 1 from the start of the 11th century right through the middle ages. Being a land-locked country between the two competing Empires of the Austrians and the Ottomans, it is no wonder that Hungary’s history is so complex. It is impossible to summarise this period here but let me give you a glimpse of two representative pieces from the exhibition. The first on the left below is the highly ornate sepulchre of Gyorgy Aparfi, a governor and warlord of one of the competing counties trying to rule ‘Magyar Territory’ in the 1630’s. The painting on the right depicts the fate of three members of the Hungarian aristocracy in the 1660’s who tried to come to a deal with the invading Ottamans. The resulting loss of their heads is depicted in this cartoon from the time, perhaps as a warning to others who might want to come to terms with the infidel!

After we finished our time in the Museum, we

walked on towards the City Covered Market (Nagycsarnokm) but failure to check opening times of #7 on our list meant we were disappointed that the market was not open on Sunday.

After checking out the view of Castle Hill from the Szabdsag Bridge, we then headed back into the centre of Pesh along the main shopping street to check out the Christmas Markets that were open today. It was a slow walk as every variety of shop attracted close attention until we arrived at the Christmas Markets in the square surrounding the Metro Station, Vörösmarty tér. Christmas markets all over Europe at this time of year are world famous and it was great to stroll around, checking out the new and amazing baubles on sale this year. There was also traditional music and dancing to be appreciated in the square.

Thousands in Budapest march against ‘slave law’ forcing overtime on workers’ Anger at Viktor Orbán’s rule in Hungary also directed at courts system and state media. Hungary’s opposition has been fractured and ineffectual as Orbán has steadily amassed power since he was elected prime minister in 2010, but the “slave law” has created a rare rallying point.

At least 10,000 people marched through Budapest, from the historic Heroes Square to the parliament building on the banks of the Danube. Many also channelled wider concerns about attacks on academia, the judiciary and media. Some were protesting against new courts that critics say could be politically manipulated. Others, in an apparent attack on bias in state-controlled media, shouted: “The TV is lying.” Banners included slogans such as “sweep away the regime”, or called for a “national strike”. (6/1/2019)

The next day we decided to start off with a new destination in a new direction using transport other than our feet. We had trialled using the Metro back from Vörösmarty tér the previous afternoon so we were quiet confident that we could cover more ground today and catch up on two of the sites we missed yesterday. Our first destination was Heroes’ Square which  was way down our list at #14. From what I had heard from previous travellers to Budapest, Heroes’ Square was a must see, not just from the large sculptures that were the centre of the site, but it was not only flanked by two museums but was just next to a key bridge over a lake that led  to the city’s main park.

The whole area of Heroes’ Square has great significance in Hungarian History and for modern Budapest. It was begun in 1896, the year Hungary decided to celebrate the 1000 years since seven chieftains led the Magyar tribes into the Carpathian Basin. This ‘Millennium’ year was a year of major development for Hungary and Budapest…

Even our old friends from Vienna, Franz Joseph I and his lovely wife Elizabeth came to be part of the opening ceremony of the Millennium celebrations. Elizabeth (Sisi) was to be assassinated 2 years later beside Lake Geneva. Hungary was of course part of the Austro-Hungarian Empire in 1896 so tensions around Hungarian Independence would have been on the royal visitors minds, particularly when one of the statues on the Millennium Monument in the middle of Heroes’ Square was to be of Franz Joseph himself.

Heroes’ Square is a three dimensional celebration of Hungarian history. The statues tell not only the story of the last 1000 years, they also reflect and commemorate some of the change in Hungarian fortunes over the twentieth century. For example, five statues of Hapsburg Monarchs (including Franz Joseph’s and also that of the fabulous Maria Theresa of Austria who was one of our companions on our journey through Central Europe) were replaced by local heroes after WWII. A 1929 memorial in the square to those who died defending Hungarian borders (speaking of the fierce Hungarian thirst for independence) was not something that the Communist Government could live with, so it was removed in 1951. The rest of the statues reflect Hungarian pride in their history that hasn’t altered since 1896.

The centre of the Millennium Monument is the Archangel Gabriel on a pylon wielding the crown of St Stephen and the cross given to the 11th century saintly king by the Pope of the time. Surrounding and defending this emphatic Hungarian symbol are equestrian statues representing the seven chieftains who led the Magyar people into the Carpathian  Basin.They look a bit like marauders from a computer game; they are a best guess as to what chieftains might have looked like back in 896. Behind the Millennium Monument are two arched colonnades that contain the statues of the Hungarian Heroes, kings and warriors that have fought long and hard for the land of the Magyar people.

On the other side of the lake from Heroes’ Square, there is large castle-style building that we had little information about before we had set out that morning. It looked very interesting and so we wondered over the bridge in the rain to check out what looked like some ancient Hungarian Castle from the early middle ages or at the very least, some highly significant home of past Hungarian nobility that had been generously bequeathed to the state. On arrival we discovered that it was the National Museum of Hungarian Agriculture! Clearly its internal contents didn’t demand our attention but it looked like a castle from outside…or three different castles plonked together. It was in fact the descendant of the temporary cardboard castle built for the 1896 ‘Millennium’ event and it was so popular, it was built again out of ‘real castle’ material. It was meant to be a copy of an ancient Transylvanian castle so this 120 year old castle at least now has fleeting memories of Vlad the Impaler’s father wandering the corridors. It was places like this that brightened an otherwise dark & rainy day for us visitors. On sunny days, the whole area of the City Park and surrounds would have held our attentions for a full weekend. Unfortunately, not the day we visited. We headed for the Museum of Fine Art that was next to Heroes’ Square, only to find it closed on Monday. Site closures and rain; two of the enemies of good touring. 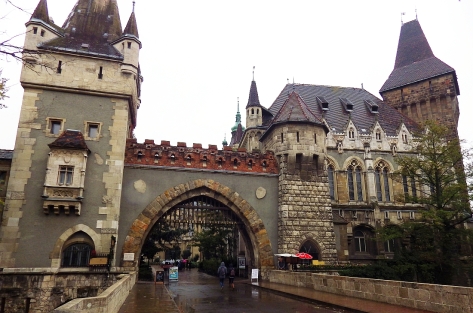 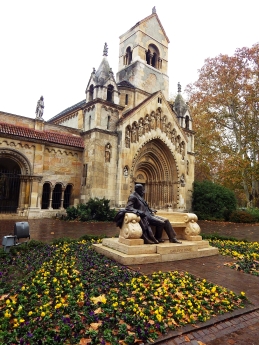 Vajdahunyad Castle, so redolent of Transylvania and Vampires, that there is a statue of Bela Lugosi, the Hungarian and Hollywood star of early horror films, in a niche on one of the castle walls. 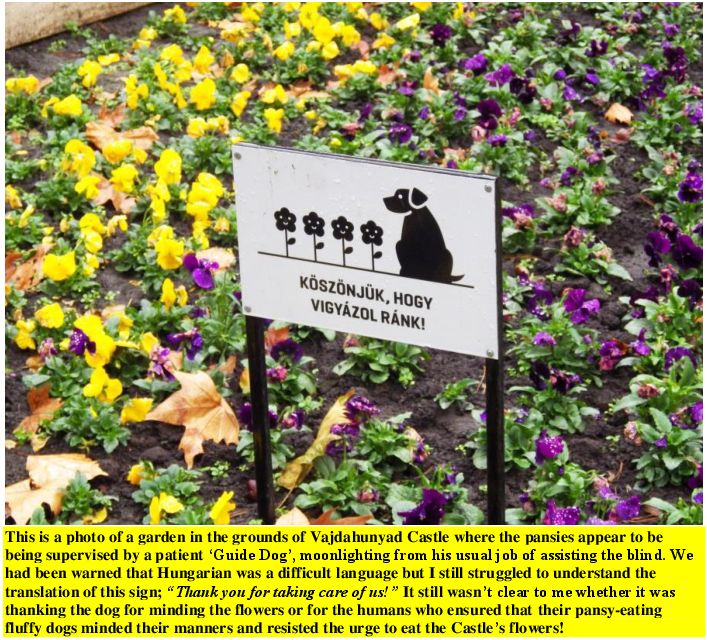