From the beginning, kicks and punches were exchanged. At one point, a punch thrown by Hungarian captain Dezső Gyarmati was caught on film. Meanwhile, Zádor scored two goals to the crowd’s cheers of Hajrá Magyarok! (“Go Hungarians!”). By the final minutes of the match, Hungary was leading 4–0. Zádor was marking Valentin Prokopov, with whom he had already exchanged words. Prokopov struck him, causing a bleeding gash. Zádor left the pool and his bleeding was the final straw for a crowd already in frenzy. Many angry spectators jumped onto the concourse beside the water, shook their fists, shouted abuse and spat at the Russians. To avoid a riot, police entered the arena and shepherded the crowd away. One minute of the match remained. (Wikipedia)

Arriving in an unfamiliar city in an unfamiliar country always prompts me to make a list of the things I actually know about the place. I could only recall two personal memories of Hungary and Hungarians. In the early 1960s I lived in Arncliffe, Sydney, just up the road from a large factory where the workforce seemed to consist of mainly Central European immigrants from Yugoslavia and Hungary. The other vague memory of Hungary I have is hearing about the story from the Melbourne Olympics that didn’t have much impact on me at the time; after all, it was about people and countries a long way from Sydney. It was the story of the ‘Blood in the Water’ water polo match described above.

As a young teenager I simply accepted the presence of large numbers of dour men in my neighbourhood walking to and from their workplace every day with little understanding of why they were in my part of the world. No doubt I mused about what horrors could drive families from central Europe to take up shit jobs in the antipodes but with little sense of the ghastly history behind their presence on my footpath as I headed to school and they headed to their factory jobs. By visiting Budapest 55 years later, I began to understand why they had little alternative but to flee their homes for a kangaroo country on the other side of the globe.

We had three days to get to know Budapest and with such a big beautiful city to explore, one starting point was to check the travel websites and find out what the local experts suggest visitors should see. The following list is a suggestion for the top things to see in Budapest taken from Lonely Planet and similar sites; the list is pretty spot-on but I am sure the order of priority will depend on the interests of each visitor.

When we arrived in Budapest on the first day, we were booked in for a short afternoon Bus tour of the city. Our tour company decided that #11 on our list, Castle Hill, was the priority destination for this group tour. On the way from the centre of town, our guide gave us a quick introduction to the city divided by the Danube River. Budapest is a combined city, two towns being merged in 1873 as the city and country moved towards independence from the Austro-Hungarian, Hapsburg Empire. The merger of Buda and Pesh is the major influence on the structure of the city and it was explained by our guide that Buda was the older, administrative centre with the palace/castle on the cliff overlooking the Danube. Pesh was the younger, more modern centre where big business held sway and all night the young partied at the night clubs and ‘ruined’ pubs. We were told that there was a local saying that went something like, “There are those who live in Buda and those who wish they did!”

Our bus tour took us over the river and headed towards the road that took visitors up the hill to St Matthias Church which was our destination for the afternoon. I was surprised by a building at the bottom of the hill near the funicular station that assisted aged tourists up the mountain side. It was apparently built for the convenience of Elizabeth (Sisi), the wife of Emperor Franz Joseph II of the Austro-Hungarian Emperor. On one of her visits to Budapest, nothing but the best was provided for Sisi due to her pro-independence for Hungary views that she made clear to the locals and her husband. The bridge we used to cross the Danube was the route to Castle Hill and was called the Elizabeth bridge. The original was built at the end of the 19th century and named after the assassinated Elizabeth of Bavaria; of course, the current version of the bridge was built in the 1960s as all bridges over the Danube were destroyed by the retreating German forces in 1945.

Our guide chose this area of Buda as our central site for the afternoon, not just to visit the beautiful Matthias church, but for the spectacular view from the ramparts on the cliff edge in front of the Church; it has to be one of the great urban views in Europe. As was to be expected on such a key site in Central Europe, the history of St Matthias was long and eventful. The original church on the site was built by the famous sainted King of Hungary, Stephen in 1015. Two centuries late it was a target for the invading Mongol armies who destroyed it in 1242, before they decided to retreat back to the Russian steppes. 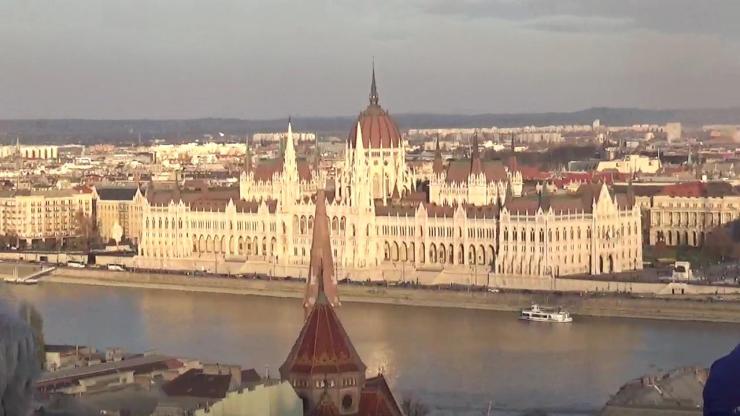 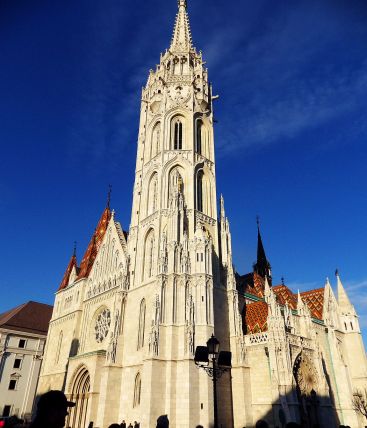 The Matthias Church in Budapest is a lovely building on a breath-taking spot on top of the cliffs of Castle Mount. The interior of the Church has many beautiful features, particularly the pulpit rebuilt at the end of the 19th century and the curious Loreto Chapel where is preserved a black Madonna statue that played a mysterious role in the Turkish invasion of Budapest back in the late 17th century.

There is the usual wonderful equestrian statue

between Matthias Church and the ‘Fishermen’ Ramparts that so beautifully provides protection for Castle Hill. The statue is of St Stephen, the founder of the Hungarian state between 1001-1038. St Stephen wasn’t the only defender of these ramparts. The Mongol invasion was also not the only time Buda and Pesh were destroyed; the Turks, who captured Buda more by trickery, built ramparts along these cliffs and these were eventually overrun by invading Christian armies in 1686. Castle Mount was the last bastion of the German Army in Budapest in 1945, holding out for two months against ‘liberating’ Russian troops. In the process, considerable damage was done to the beautiful buildings on Castle mount. The magnificent palace building further along the cliffs was left a roofless ruin for many years after 1945 and its abandoned nature meant that much was destroyed and its pre-war beauty never quite recovered. The fairy-tale looking ramparts along the cliff edge, built at the start of the 20th century, provide a lure for the tourists of the 21st century but probably won’t provide much resistance against future invading vandals.

Further along the skyline that is Castle Mount, 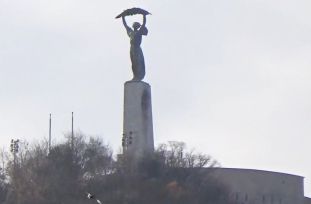 there is another large hill that overlooks the city. It is Gellert Hill and has the remnants of another conqueror’s bastions; this is where the Hapsburg Empire built a fortress after the 1848 revolution in Budapest to ensure future attempts to achieve national liberty would hesitate due to the cannons pointing at Buda. The most obvious sign of 20th century foreign repression is the striking Liberty Angel (Szabadság szobor) who stretches out a palm frond against the skyline of Gellert Hill. It was placed here by the liberating Russian troops after 1945 to commemorate Russian soldiers who died in the taking of Budapest from the Nazis. After the 1989, most Communist Era statues were not destroyed but removed to Memento Park, 10km south-west of Budapest.

Statues around the base of this Statue of Liberty were removed to Memento Park but the angel was allowed to stand and continue signalling freedom to the skies. Memento Park made number two on my borrowed list of sites to see in Budapest but unfortunately time didn’t allow for a visit.

There is one last statue that I would like to recommend to travellers on the skyline of Buda. In a square near to St Matthias Church there is a monument that reaches for the heavens, and passer byes might think it was a traditionally pious, Christian monument. It is usually called the Trinity Monument as its imagery at the top of the column is of the Holy Trinity. However, this is generally called a Plague Column and is of a type that is found all through the cities of Central Europe, usually built by citizens to ward off the Black Plague or to thank God for the end of the blight’s visitation to the city. Curiously, the originally Plague Column didn’t work on this site and this much larger one was built to replace the original when the Plague revisited the city in 1709. Further details of Plague Columns in other cities of Central Europe can be found in a related blog entitled; ‘PLAGUE COLUMNS…The Intersection of great Art, great Misery and great Piety!’