When I was asked where I was going for my 2018 trip, the answer ‘Romania’, was always greeted with surprise. I was asked questions like, “Where is Romania?” , “Why would you go to Romania?” and “Aren’t you afraid of Gypsies?” and so it highlighted for me the issues behind choosing an overseas destination. What do we have to know, what links with a country do we have to have before we commit to a travel destination. In Romania’s case, we were encouraged by recommendations from a colleague, particularly the idea that mass tourism had yet to take off there and so it was a great place to go before the huge bus loads of sightseers from the emerging economies arrived.

But there were already personal links with Romania that I had wondered about over the years. For example, all travelers in Western Europe have come across Gypsy beggars who cause them consternation by their attempts to extract money from all and sundry by nefarious means. Where do they come from? They must come from Romania as the other name most commonly used is the Romany or Roma people. The name Gypsies seems to suggest an origin in Egypt but this has no basis in reality; there are many names in different countries for the wandering people. The Romany people don’t keep records of their past or issue information to authorities in host countries, the only conclusive evidence as to their origin is linguistic and, in recent years, genetic evidence. The most accepted explanation as to their origin is that they left as a large group from Northern India about 1500 years ago, eventually reaching the Balkans from where they spread throughout Europe.

Romanians themselves who we asked about the gypsies of their country, were very happy to explain the situation, usually with their teeth clenched. The Romany are one of the ethnic groups that make up Romanian society as well as the Hungarians, Saxons (Germans) and Romanians themselves. Our guide on our trip suggested that large numbers of Romany people have settled happily in Romania living normal lives with education and jobs; another section are the wanderers who head out to other countries in Europe in the summer and cause embarrassment to the folk back home. Our Guide at ‘Dracula’s Castle’, when explaining Vlad the Impaler’s practice of giving beggars and thieves the choice of death by stake or getting a job, they usually chose getting a job.

He then quipped that these days “we send our beggars to

France and France pays us to take them back in the winter time!”

On our way out of Bucharest towards the end of our trip, we were heading for a day in Bulgaria. On the southern edge of the city, we passed two large buildings on opposite sides of the road that our guide informed us were ‘Gypsy Castles’ owned by wealthy Gypsy families. Clearly not all Romany people were wandering beggars.

The other issue that I was aware of about Romania was that back in the 1980s, there had been television coverage in Australia about the awful state of orphanages in Romania where large number of abandoned babies were held in terrible conditions. Couples who were unable to have children and wanted to adopt a child, were going to Romania, hastily adopting a child and reporting back to Western news outlets the terrible conditions their child had been kept in before he/she was rescued. The name Nicolae Ceausescu, the Communist leader of Romania, was regularly heard of in these news items as the cause of much of his countries severe economic problems that had led to families in extreme poverty unable to look after their children.

The period in Romania from 1947 to 1989 when Ceausescu was in power was a topic that regularly came up in our travels around Romania. The ‘Communist period’ regularly came up in explanations of things we encountered in our travels such as the typically large, unkempt, unit blocks built in the Communist period. It also came up as part of the explanation of the movement of young people away from villages in the countryside where land was being left untended and the local population usually consisted of their aged parents left behind by the departure of their children to the cities as well neighbouring Germany. Romanian society seemed to be divided significantly between the old folk who had lived under the Communists, the generation who were born under Communism and survived to tell the tale and their children who are better educated and had no experience of the repressed lives lived under Ceausescu’s eccentric rule. It is this section of society that is so mobile and happily head off to other countries for good jobs and higher wages and salaries. Perhaps the most disturbing encounter we had with the remnants of the Communist period was when we arrived in the city of Sibiu and drove past the huge site that was the previous training academy for members of the secret police that monitored all aspects of social life in Romania in that period. It was this secret police who were part of the triggering of the downfall of Ceausescu by shooting young protesters in Palace Square in 1989. It is now a military academy training Romanian soldiers for their work with NATO.

I was also aware that Ceausescu and his wife had made a brief visit to Brisbane, Australia in 1988 to discuss business with entrepreneurs like Lang Hancock and Brian Bourke, the premier of Western Australia. The couple had been guests at the Governor’s House in Brisbane and had made an inspection of the Art Gallery on the river. The Ceausescus were nearing the finish of building the second largest government building in the world back in Bucharest and were looking to build another lavish structure nearby for the necessary opera house; Mrs Ceausescu in particular was looking for inspiration from Brisbane’s public buildings. 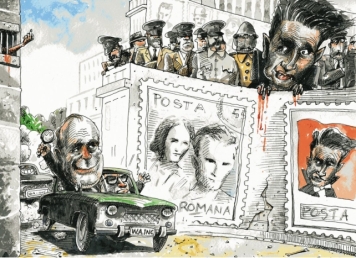 After they left Australia and headed home, it was only 18 months later that Ceausescu’s meglomaniac approach to ruling his country saw the breakout of violent revolution, culminating on Christmas Day 1989 that saw him and his wife executed. It was a revolution that was memorable, not just for the bloodshed, but for the fact that key incidents were played out on television.

A cartoon at the time of the couple’s visit to Australia, shows Brian Bourke happily attempting to woo Ceausescu into trade deals with his state while in the background are his communist generals and Ceausescu dressed as Dracula, sated with the blood of his own people.

Of course the other major memory of Romania in my own lifetime was that it was the home of Dracula, the famous character in Bram Stoker’s novel that I read as an impressionable young man. Stoker had never visited Romania but his surprisingly gripping novel had spawned an industry in the early years of Hollywood. From the 1970s, the Dracula legend was so pervasive in Western Society that it spurred an interest in tourists coming to Romania searching for the castle depicted in Stoker’s novel as well as any other associations with the wolf-howling forests that would give them first hand experience of Vampires. The problem with this process was that the novel was a work of fiction and when attempts were made to ground the Dracula Vampire story in the real history of Romania, all that could be found was the ghastly story of Vlad the Impaler, a ruler of Wallacia in the early 14th Century.

The other narrative that seemed important to Romanians to explain to tourists was the troubled history of the Romanian monarchy, particularly as a number of the most impressive tourist sites that we visited were bound up with this lost monarchy. Here is the potted summary of the kings and Queens of Romania.

As the above table illustrates, the reign of the Romanian Royal family was unlucky in the sense that it had to deal with a world background that included the Balkan Wars, World War 1, the rise of Communism and a disastrous involvement in World war 2. Since 1947, the royal family has lived in Switzerland and Britain before ex-King Michael returned to Romania after Ceausescu was overthrown but he wasn’t requested to return to his former job. He died in 2017 and his family are still dreaming of returning to their former position in Romania. All is not lost as a great deal of family property that was confiscated by the Communists, was returned to them after the fall of the Communists. For example, Bran Castle was returned to the family and it was immediately put on the market. This practice of looking a gift horse in the mouth and then trying to sell it did not endear the family to the Romanian Government. It still remains on the market.

All these issue that I have discussed here were raised in one way or another in the different places we visited in Romania. We found the country a surprisingly beautiful, friendly and peaceful society making great inroads with their economy whose GDP is increasing at one of the fastest rates in the Euro zone. However the idea that we would be able to see Romania before large numbers of other tourists found it was proved to be incorrect. At all the sites we visited, there were large number of visitors, particularly around the painted monasteries of Bucovina.