Visiting the four main Franciscan sites that are not that far outside the walls of Assisi is an easy tour that can be done in a day; as long as you have your own transport. San Damiano can be reached by a steady twenty minute walk down the hill from Porta Nuova. Then you presumably have to walk back up the hill if you are staying in Assisi. You can catch a bus down hill to Santa Maria Degli Angeli and then a local bus to Rivitorto. This is a slow but doable process if you have plenty of time. However, it would be a very long walk up to Eremo Delle Carceri and would only be possible for extremely fit mountain walkers. For the sake of this itinerary, let us assume you have a hired car or you are part of a small bus tour group. Given that, I would suggest that you start with the most distant of sites and work your way back down hill and end at Rivotorto.

In translation, Eremo Delle Carceri means (roughly) ‘hermitage of prison cells’. It can be reached by a winding road up on the side of Mount Subiaso and is a large area of trails winding amongst the trees to great views down over

the valley. It is a very beautiful and peaceful place and great for a long reflective stroll if you have had enough of cobble-stoned streets. It looks like a perfect place to find a shaded nook and have a picnic. I travelled there some years ago to do just that, only to return the picnic basket to the car when I encountered the sign on the right at the gate! In trying to guess the reason for the ban, maybe it was because of the littering behaviour of earlier picnickers or perhaps Francis himself frowned on al fresco dining.

It is believed that Francis started seeking prayerful isolation in the forest and caves of Mt Subiaso around 1205 when he was trying to figure out the direction his life was to take. Already at this time there was a small chapel on the site owned by the Benedictines. Francis and his companions used the caves in the area to withdraw and wrestle with themselves and their God. This pattern of his life, withdrawal to peaceful, natural areas and then back to re-engage with the towns was to be the pattern that Francis kept up for the rest of his life. Eremo Delle Carceri was given to Francis by the Benedictines in 1215, probably at the same time they handed over the Porziuncola way down in the valley below.

Our walk through the stone building that incorporated the original oratory and St Francis’s cave was a return to the twelfth century…the monks were much shorter than us so you have to be very careful not to come out with a bleeding forehead. It was then on to follow the trails that wandered the side of the mountain leading to all many of perfectly placed bush chapels.

As in all of our stops around Assisi,

we encountered the story of Francis and his companions as told by bronze statues relevant to this spot. Not far from the main building in a curve in the trail, a group of statues is to be found, most standing, apparently deep in discussion while Francis lies on his back, presumably gazing up at the night sky. This tableau is the most complex of the Franciscan statues in the district. There is a plaque with an explanation of the story being told by this silent group of friars, written in Italian, which explains that it presents some of the early brothers spending a clear night outside viewing the stars. One of them is holding his hand up to do a rough measurement of distance between stars while Francis lies relaxed on his back just enjoying the night spectacle of creation.

When Francis wrote the Canticle of Creation, one of the first pieces of literature in the Italian Language, towards the end of his life, perhaps he was remembering his night star gazing up at Eremo Delle Carceri.

“Be praised, my Lord, for Sister Moon,
and for the stars…”

The next stop on this itinerary is to drive back down the mountain to San Damiano, the site of the church that Francis famously rebuilt and then decided that he was taking his divine instructions too literally. It is also where St Clare lived most of her life with her order of Poor Clares. 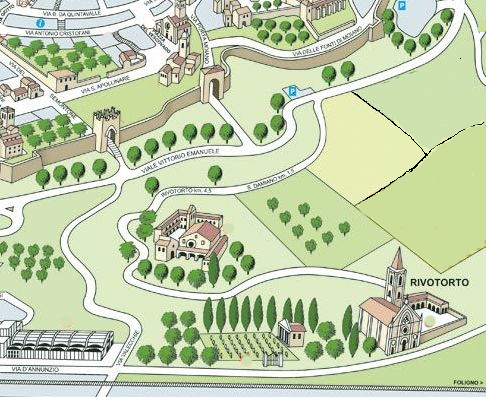 Like the Porziuncola down the hill, San Damiano is a central site in the story of St Francis. It is one of the first churches he decided to repair when he was desperately looking for his mission in life and it was the home of the San Damiano Cross which he heard telling him to rebuild his Church. It was also the place where he set up Clare and her sisters as part of the Second Order of Franciscans. He visited San Damiano many times in his life and it was where he wrote much of The Canticle of Creation. It also was where he came to be cared for towards the end of his life when his ill health, particularly from his much mistreated eyes, was causing him great difficulties in getting around at his usual pace.

The statues of Francis around San Damiano seem to have the theme of Francis returning to San Damiano looking for, or finding peace. This is the atmosphere of this sanctuary that visitors find as they sit in the original, small church of San Damiano or walk the cloisters that were added onto the original building to house the Poor Clares. 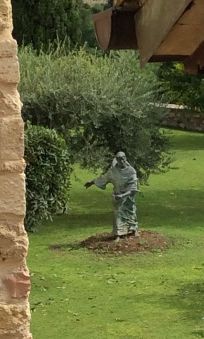 O Most High, all-powerful, good Lord God,
to you belong praise, glory, honour and all blessing.
Be praised, my Lord, for all your creation
and especially for our Brother Sun,
who brings us the day and the light;
he is strong and shines magnificently.
O Lord, we think of you when we look at him.
Be praised, my Lord, for Sister Moon,
and for the stars
which you have set shining and lovely in the heavens. (Verse 1)

The church of Santa Maria D’Anglei is central 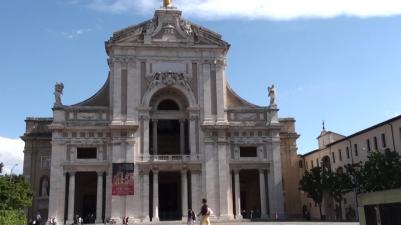 to the Franciscan story as it is built over the ninth century church that Francis repaired and lived around, the Porziuncola. Again it must prick the conscience of those monks who hold to Francis’s clear views on material goods to realise that the humble church that Francis repaired and loved so much was covered over in the middle of the 16th century with the seventh largest church in the world. Of course, the demands of gatherings of Franciscan monks and the pilgrims coming from all over the world made the original huts built around the Porziuncola inadequate to cope with pressures of such an influx.

The Porziuncola comes into the Francis story in 1206 when it was one of the churches Francis repaired in response to the call via the San Damiano cross. The monks moved there in 1208 and it continued to be a central place in Francis’s life. It was here he wrote the first rule in 1209, he received Clare into the order here in 1212 and it was the site of many of the early chapters of the Franciscan monks. Francis died here in 1226.

Again there is a statue of St Francis to be found on the on the way out of the annexe to the Church that captures a small moment in the St Francis story that his friends recorded for posterity. The story is associated with the Porziuncola; one time Francis found a cricket on a fig tree outside his door, coaxed it onto his finger and said, “Sing, my sister cricket!’

Be praised, my Lord,
for our Brothers Wind and Air
and every kind of weather
by which you, Lord,
uphold life in all your creatures. (Canticle)

The sanctuary of Rivotorto is a couple of 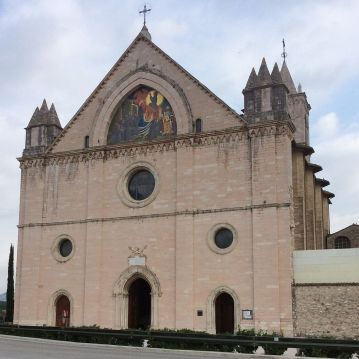 kilometres down the road from Santa Maria D’Angeli along the road towards Foligno. Rivotorto comes in to the story of St Francis around 1208/9 when he was looking for shelter for his early group of brothers during the winter months. The apparently abandoned buildings were down the bottom of the hill, a good walk down from San Damiano and were used to keep animals and when Francis and the brothers were kicked out later on, they were used by the peasant owner to keep animals again…they certainly weren’t salubrious digs for the early brothers. It was around this time that Francis and his group went to Rome to ask approval from Innocent III for his band of preaching mendicants. Given that Innocent was down on heresy at the time and particularly the wandering groups travelling the hill towns who spread anti-church feeling, it is surprising that they got an interview, let alone verbal approval for their

mission. On their return to Assisi, they spent a few months more in Rivotorto before moving to live around the Porziuncola. Today a visit to the Church at Rivotorto will reveal to the visitor some ‘reproductions’ of the original huts inside the church building.

In the Giotto timeline from the Basilica of St Francis, Rivotorto is the subject of fresco number 8 where we see the monks in Rivotorto having a vision of Francis flying overhead in a flaming chariot. Of course this incident is repeated in a number of other images at Rivotorto, in particular, on the front façade of the church.

statue of all the statues of St Francis scattered around the Assisi countryside is found at Rivotorto. It is a statue of Francis surrounded by both happy children and birds and probably should be reproduced in Franciscan schools to replace the bird bath statues.  The second sculpture describes the encounter between Francis and the leper from his early days walking between the valley and the town of Assisi.

If you have finished your tour of Assisi and its surrounds at Rivotorto, why not take a 15 minute drive down the valley to Spello and have a quick stroll around the walled town before finding a café for the joys of an Umbrian lunch or dinner. You won’t regret the detour.