Zurichsee from the train enroute to St Moritz

On our visit to Switzerland our destinations involved three places; St Moritz, Zermatt and Interlagen. I had never heard of the second two places but I had been familiar with the name of St Moritz since the late 1960s. As Australians we have been embedded in European and American culture since the time of the first fleet. This of course has been multiplied in the twentieth Century by the movies and magazines that promote celebrity icons and film stars for our regular contemplation and consumption. St Moritz has been a name that has regularly emerged from that avalanche.

When you go on your summer vacation
You go to Juan-les-Pines
With your carefully designed topless swimsuit
You get an even suntan, on your back and on your legs.

And when the snow falls you’re found in St. Moritz
With the others of the jet-set
And you sip your Napoleon Brandy
But you never get your lips wet, no you don’t.

But where do you go to my lovely
When you’re alone in your bed
would you Tell me the thoughts that surround you
I want to look inside your head, yes I do. (Peter Sarstedt 1969)

If questioned, my first recollection of the name, St Moritz, would be from the song ‘Where Do You Go To My Lovely’ that rarely left the airwaves back in my last year of High School. Peter Sarstedt’s image of the super-cool chick who he once knew from “the back streets of Naples” was the image for me of the folk who went to St Moritz…beautiful, educated, rich, well connected and most obviously, stylish!

So it was with some trepidation that I arrived in St Moritz assuming that I would have to mingle and blend with the ‘Jet-Set’. I had arrived in Zurich by Jet but I presumed that the bar had been set higher since the 60s for entry into the beautiful people clique. (Perhaps they are now called the ‘Lear-Jet-Set’!) On arrival in St Moritz, I realized that no member of the rich and famous would be confused as to my status; we were staying at Hotel Laudevilla on the side of the local lake called ‘St Moritz Bad’ while the wealthy elite stayed at the famous Badrutt’s Palace Hotel in the centre of St Moritz on the higher side of the lake. The term ‘Bad’ is apparently not a derogatory term in Switzerland, it simply indicates that the town is a ‘Spa’ town and is generally considered suggestive of the high quality of that  town’s Spa. Whist James Bond and his confreres would no doubt visit the Spas across the lake, we wouldn’t encounter them in our hotel or have to worry about complying with their senseless demands for drinking Napoleon Brandy without getting our lips wet.

After setting out from Zurich by train to St Moritz, I very quickly lost my social class fears, immediately absorbed by the beauty of Zurichsee (Lake Zurich) that our train glided beside. Many people had told me of the thrill of journeying through Switzerland but I clearly needed to see for myself the sheer mountainsides and the gorgeous rushing streams and waterfalls that the country is famous for. The train climbed steadily higher and higher and so by the time we arrived in St Moritz, we were surrounded by the huge mountains that you would expect for a world class ski resort. The town is gathered around a Goldilocks  lake  that is of course neither too big or too small, perfect for hiring a mountain bike and touring around the shoreline. Like all the Swiss valley towns,  it necessarily had the swift flowing stream running through the centre of St Moritz Bad into the lake and then out the other side, carrying the snow run off further down the mountain valleys.  It is the perfect spot for a mountain Spa, its reputation going back to the Bronze Age as evidenced by the swords and needles left around the base of one of the springs. With the very skiable mountains at your front door and a frozen lake in the centre of town, it is no wonder that two winter Olympic Games have been held at St Moritz. 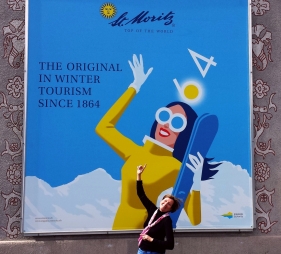 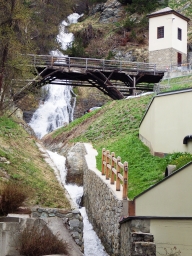 St Moritz itself is a beautiful town

and a pleasure to stroll around, checking out the beautiful houses and the mountain and lake scenery. We visited in May so it was off season for the multitude of ski enthusiasts. This also meant we were not able to shop with the rich and famous and pay the extraordinary prices demanded at the expensive boutiques as the owners and workers had also gone on holidays elsewhere.

On the second day of our stay we chose to visit some of the other recommended sites within easy reach of St Moritz so we reboarded the train and headed further up the valleys towards Italy to Bernina Diovalezza. Most of the Ski lifts in the area are closed at this time of year but we were lucky that this mountain’s gondola was still operating and was able to take us up to the top of the mountain for the glorious views of the alps, the good coffee and the warm beer that needed to be placed in the snow for a while to bring it down to Australian tastes. Although the ski season was over, there were still ski ‘tragics’ in the Gondola heading up for their last desperate dash down the long slope (see below) before they were banished back to their normal lives for another six months. The photo on the right below also shows the beautiful facility at the top of  the mountain where we were able to have our morning coffee and cake for privileged prices. On the side of the wall can be seen a painting of the symbol of the Engadin area we were travelling in, the beautiful curved-horned mountain goat called the Ibex. The theme of the place of the Ibex in local culture was to be continued at Pontresina, the next site we visited back down the railway line towards St Moritz.

The beauty of visiting the Engadin, in the Canton of Graubunden, is that it is a long high alpine valley that follows the River Inn that eventually flows over the border into Austria, down to the Danube and its waters eventually make it to the Black Sea. The geography of the valley means that villages straddle the river and try to climb the side of the valley walls until they are stopped by the growing angle of the slopes of the valley walls. This is all to the good of the train traveller whose choice of scenery moves from gorgeous Swiss villages to the rushing river beside the railway line and then up to the mountainous skyline. Pontresina was one of these gorgeous villages we stopped at and it also promised the usual charming architecture as well as possible encounters with the famous but elusive Ibex! 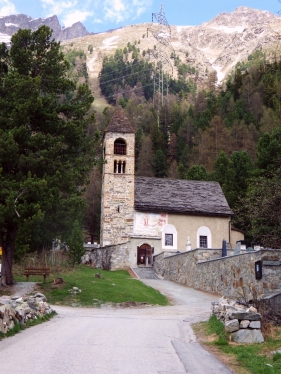 The story of the Ibex is a classic tale of what happens when the natural environment encounters a growing predatory human culture that gives no thought to the long term consequences of its behaviour. With hunters changing from bow and arrow to guns, and spurred on by theories about the medicinal value of the Ibex horns, the Ibex became extinct in Switzerland. Perhaps the extravagant beauty of their curved horns also led to their downfall. Luckily the Ibex survived in some mountain valleys in Italy and the story goes they were returned to the Swiss mountains through smuggling from Italy and then bred up in small zoos. There are now about 15000 Ibex living in the wild in Switzerland. Their doom of being gorgeous creatures has led to the reintroduction of  “controlled hunting” since 1977.

We walked from the railway station up the steep hill to the village of Petrasina as the other casualty of the low season was the lack of buses. We visited the Information centre to find out where we could visit the wild Ibex coming down from their usual home in the area between the tree line and the snow to dine on the sprouting grass above the village. It may have been language barriers that meant we came away from the tourist office with little further insight as to where we could spot the Ibex. We decided to walk along the main street of Petrasina that ran horizontally along the mountainside and the sights just kept drawing us on until we spotted a beautiful small church further up the mountain. Struggling up the hill, we encountered a couple of locals who asked us if we had come to see the wild goats! Through pure good luck we had encountered the path that led along to the point where the Ibex had come down the mountain looking for food. These beautiful wild goats dine on the side of steep mountain slopes so our ageing, tiring bodies couldn’t get too close to them but the sight of the rare Ibex was worth the journey. The image above is of a wooden representation of an Ibex horn, marking the start of the track that took us close to their habitat.

We were a weary but happy bunch walking down the long hill to the train station ready for our trip back up the valley to our hotel in St Moritz Bad.