There is a lot to see along the National Mall in Washington. The only trouble is the presence of the Whitehouse nearby and if you are there on the same day as a foreign dignitary (eg. Recep Erdogan), there may be some difficulty catching buses or visiting the Whitehouse as well. If Museums and Art Galleries aren’t your thing, stroll or bus up to the Capitol end of the Mall and see the buildings that house the decision makers that influences the entire world each and every day.

There is a large number of significant Museums and Galleries on both sides of the National Mall and you would need a many many days in Washington to visit them all. If that is your wish, you may need to be actually living in Washington or on sabbatical there. If you have only a few days, here is a list you can choose from.

The Capitol was finalised and Washington became the home of the US Government in 1800. However tensions with Britain continued which had a huge impact on the early years of this building. The US declared war on Britain in 1812 and two years later, after Napoleon had been defeated, British troops invaded up the rivers from the coast leading to Washington. They burnt down the Capitol Building, the President’s Mansion and much of the newly built Washington. To add insult to injury and arson, a hurricane blew in late in the process creating even further carnage. Before finishing, a tornado was generated by the storm that was so powerful it lifted two cannons into the air on Constitution avenue, killing a number of British troops and civilians when they came back down. At least the storm put the fires out. This whole story of death and destruction took only 26 hours before the Brits retreated back down river.

There have been no further invasions, fires or deadly tornadoes to interfere with good governance in the Capitol building of Washington. The day we arrived, the scene in front of America’s central home of government was very peaceful. However there are days every four years after Presidential elections where the front façade of the Capitol Building becomes the centre of world attention and is a very crowded space. The image below of the crowded steps during President Trump’s inauguration illustrate this.

At the time we were visiting Washington in 2019, the two houses of Government were getting started on the ugly process of impeaching the President. Visitors can go to the visitor centre at the back of the capitol and book a free guided tour of parts of the Capitol Building such as the Crypt, the Rotunda, and National Statuary Hall. Passes to visit to the House of Representatives (southern wing) or the Senate (northern wing) would be far more difficult to obtain.

Building (as seen in photo above), you get an amazing view down past the Washington Monument and further along to the Lincoln Memorial. On the left side of  the image can be seen the highest equestrian statue in America, with the Smithsonian Castle further down on the left. On a large pedestal is the statue of Ulysses S.Grant who was the

Commander of the Union forces in the civil war as well as a two-term president. (1869-1877). Looking back to the top of the Capital Dome is a bronze statue of a robed woman with a highly decorated cap that looks very much like an Indian head-dress. She is an allegorical figure titled ‘Freedom’ and was part of the original plan for the Capitol; her design was influenced by the traditional figure of the Goddess of Liberty. Around the base of the statue is inscribed one of the national mottos; ‘E pluribus unum’, out of many, one .

From the view in front of the Capitol, we walked along the footpath that took us around the building to the US Capitol Grounds at the back. Generally major government buildings have a significant frontage and the back of the building is more functional, for the use of elected representatives and workers to enter. Not so with the Capitol Building, its back entrance is just as flamboyant as the front of the building looking down the National Mall.

3. The Jefferson Building and the Supreme Court 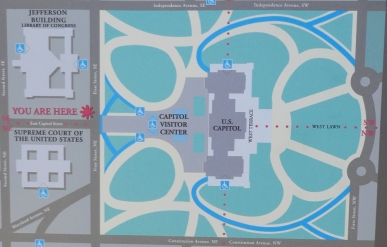 To add to the significance of the area on the western side of the Capitol, there are two large buildings facing this area from the other side of First Avenue. On the right is the Jefferson Building, the major building housing the Library of Congress completed in 1897. Of course the original library of the new

American capital was burnt down in the 1814 fire. Jefferson offered his own library to start the new Library of Congress. The interior of the building is considered to be a masterpiece of the ‘American Renaissance’ but the flamboyant exterior is what attracted our first attentions. At the centre of the frontage on the footpath is to be found a busy fountain called ‘The Court of Neptune’, completed in 1898 by a 27 year old sculptor, Roland Hinton Perry.

It was starting to get very cold at night in Washington while we there in November. The fountain was firing away but the sea-nymphs and the sea serpents were struggling with icicles hanging from their jaws.

The other impressive building on the left hand side, opposite the western front of the Capitol Building is the Supreme Court.

As was fitting for a day in the life of the courts, there was a large protest occurring outside the court building with a crowd of banner waving protesters and a significant presence of police officers. The protesters appeared to be mainly African Americans opposed to ‘Comcast’ which is a huge television and Cable Network in the US. I asked a protester to explain what the issues were but it sounded

all too complex for my tiring brain.

There are two statues guarding the steps of the Supreme Court. The one on the left being a female figure entitled the ‘Contemplation of Justice’; on the other side, there is a male figure entitled the ‘Guardian of law’.  The image to the right indicates there was something complex going on back in October 2018 when another protest was occurring outside the Supreme Court. This time the gathered group were protesting about the controversial swearing in of Judge Brett Kavanaugh. People were concerned that he perhaps had a character flaw in regard to his treatment of women so the female protester in this photo chose to object to his confirmation as a Judge by sitting outside the court in the lap of a statue representing the ‘Contemplation of Justice’ !

From the Capitol Area, it was just a short walk to our next stop, Union Station. Like so many major train stations in the USA it was not just a station for catching or arriving on trains.

We had arrived in Washington via a train from New York and then we were mainly interested in catching a taxi to our hotel. However we had noted that it was very impressive structure and worth a return visit to check it out.

Out the front of Union Station there was a very large and impressive fountain and statues commemorating the discovery of the Americas by Christopher Columbus. On the shaft in the centre of the fountain, the following inscription is to be found…. “To the memory of Christopher Columbus whose high faith and indomitable courage gave to mankind a new world. Born MCDXXXVI, Died MDIV” (1451-1506).

Between the Columbus Fountain and the station entrance is a 2:1 scale replica of the Liberty Bell. The plaque on this icon reads… “The Freedom Bell/ Dedicated to /The Spirit of the Bicentennial/on Behalf of/The Children of Our Nation/Given By/The American Legion/And American Legion Auxiliary 1981.”

The bell was part of the Bicentennial celebrations in 1975 travelling by the Freedom Train to all the contiguous states of the nation. One of the curious footnotes to the American Legion’s donation of the Freedom Bell to Washington was that it would be given pride of place somewhere in the National Mall. It only got Union Station. They weren’t happy!

It was lunchtime for us after a busy morning of strolling and inspecting the Capitol of Washington. Luckily for us there was a large shopping and food hall that is part of Union Station so we enjoyed the lunching and the admiring of the lovely architecture of this busy rail facility. It is visited by over 40 million people a year.