I am sure a visit to Volterra in Tuscany can be enjoyed for many reasons apart from its Etruscan heritage. A walled town sitting on top of a high mountain with delightful narrow alley ways, ancient Churches, a Roman theatre and great cafes and restaurants sounds like a tourist magnet to me. (When we there in May 2019, it was hosting an antique ‘Italian Car’ rally!) It just happens to be a hill town whose history is literally buried in the remains of the Etruscan civilization that inhabited this region for four or more centuries from around 700BC before its cities and towns were absorbed into the Roman Empire.

The town’s Etruscan Museum (Mario Guarnacci) houses Etruscan remains such as the ‘Urn of the Spouses’ (2nd century BCE) on the right. These have been collected from local back yards for more than 2000 years. We know the Etruscans had a separate language, both spoken and written, but it still remains largely a mystery to modern linguists. With DNA testing in the new millennium, we know the  Etruscans were indigenous to the area; they weren’t Greek immigrants or offshoots of northern European forest dwellers. So it was easy to come to the judgement that Volterra is a beautiful place to visit for many reasons, but particularly for its ancient mysterious ancestors whose memories are still evident in this mountain town. After all, the Etruscans knew that life was short and brutal with bad neighbours, so it paid to choose a high defensible mountain to live on before you even began to think about erecting walls…and what great walls they built!

Like all Tuscan hill towns, Volterra wasn’t built with motor cars in mind, despite the fact that it was the centre for a car rally the day we visited. We had to park well down the hill from the town and make our way through the lines of spectators waiting for the ageing but well dressed Fiat Bambinos to arrive and make their way

through the walls of the town and into Piazza dei Priori, the main square of the town. We entered the town via Porta a Selci and began walking along the inside wall of the fortress that dominates the skyline of Volterra. It is not an Etruscan remnant, it is a reminder of the commercial practices of the dominant city in Tuscany at that time, Florence. Rather than trade their way into accessing the valuable Alum deposits near Volterra, they sent in the troops, conquered the town and built an extra fortress into the walls. It was now a double castle, not so much to defend Volterra from the external enemies such as the envious Pisans, but to ensure the Volterrans were on their best  behaviour, allowing their Florentine masters free access to the valuable mineral necessary for their textiles industry.

From the fortress we moved on to the lovely open space, the Archaeological Park that runs along the inside of the walls. Here can be seen uncovered, remains of a sacred area containing the foundations of two Etruscan temples that once stood on this site. These buildings date back to the third century BC and so were probably amongst many buildings that were erected on this, the highest point of Volterra since the 7th century. In the background can be seen how the medieval section of the town was built at a lower level to this area where the ancient Etruscans worshiped their Gods. 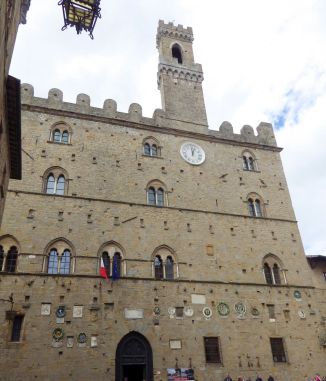 From the Archaeological Park we strolled down the hill via the winding alleys, only to be placed in great danger of being run over by noisy Bambinos, arriving at their finishing line in Piazza dei Priori. Here they ‘revved’ and roared for their adoring fans while the serious travellers tried to admire the beautiful Palazzo dei Priori. This beautiful palace was started in 1208 and has been the administrative centre of the town for nearly 800 years. Everything is old in Volterra; some scholars refer to it as one of the oldest inhabited cities in Europe. The car rally didn’t provide the best atmosphere for admiring the centre of Volterra so we headed down a side alley for lunch.

As the trail inscribed on the map below illustrates, we headed down hill after lunch, looking for what most travel advisers suggest is the number one site in Volterra; the remains of the Roman theatre.  We headed via the Piazza de San Michelle with its resident 13th century Romanesque Church. Via Guarnacci, that leads down towards the City Gate, Porta Fiorentina, is a shopping street so our pace was slow. 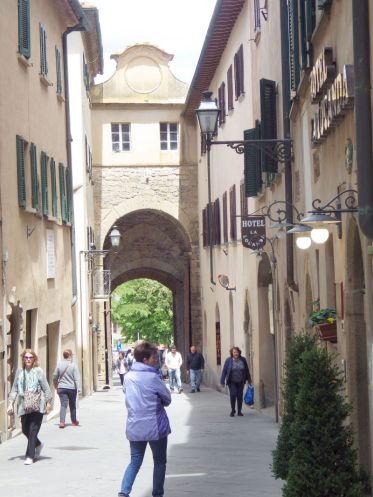 It was however worth the walk as the ruins of the theatre are an amazing sight. It was clearly once a huge precinct and would have been able to entertain large crowds back two millennia ago. The site was well presented and the quality of the information boards very helpful; the following is a quotation from one of the information panels. 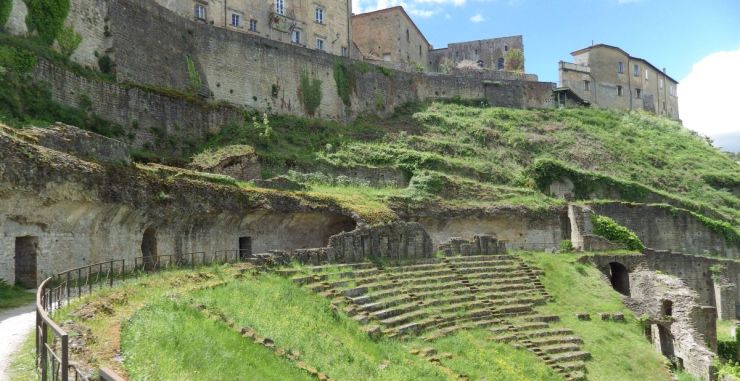 “The theatre was built in the first century BC by the Caecinae, a family from Volterra who moved to Rome in the years following Silla’s retirement (79BC) and whose gens was honoured by Cicero as the most illustrious in all Etruria. Given the orography of the area, the theatre was accessed from above, directly from the centre of town, via a complex system of flights of steps”

Behind the theatre was built a Roman bath house and a gymnasium, the remains of which can be seen in the background of the photo to the left This building has been dated to the fourth century CE so was probably constructed after the theatre had fallen into ruins. Both buildings were long gone by the Middle ages when the area became a dumping ground and so by the twentieth century, there was no sign of and little local memory that a Roman theatre had once existed in the area. The site became a logical place for a town sports field and any suggestions that it should be excavated looking for Roman ruins would not have been locally popular by the footballing citizens. One complex citizen of Volterra who had his suspicions about what lay under the town soccer field was Enrico Fiumi who was an economist and originally the treasurer of the local psychiatric hospital. He was a keen archaeologist in his spare time and was keen to see if the theory that he had come across about a Roman theatre under the local sports field had any basis. He became director of the Guarnacci Museum and eventually gained permission to at least dig a trench at the side of the soccer field. He found fragments of columns and a head of the young Caesar so even though he had this evidence, it took him another ten years to gain approval 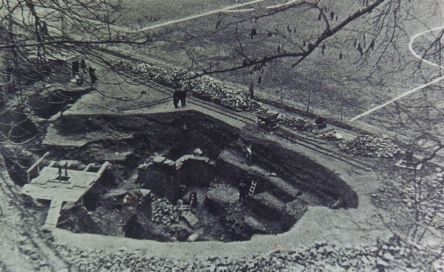 for excavating the site. The image below of a black and white photo of his first excavation beside the sport field has the following details underneath… “April 1951: excavation began in the area of the Theatre. Those employed to excavate the site were all patients at the Volterra psychiatric hospital.” So Enrico Fiumi was able to use his connections at the Psychiatric Hospital to get his excavation workforce to begin the process of revealing the amazing Roman structures that had disappeared from Volterra for the last 1500 years.

Our next destination involved a walk back up the hill to inspect the Piazza San Giovanni where we would find the Duomo of Volterra and the Baptistry of San Giovanni. The image on the left above shows the Duomo shut for renovation in 2019. Churches in Volterra haven’t had an easy ride over 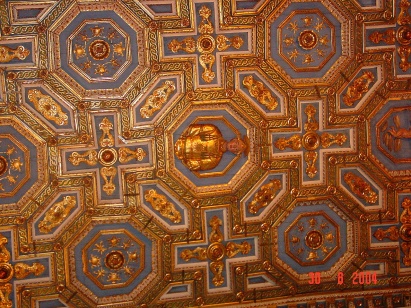 the centuries…this duomo replaced the original one on the site from the 9th century that was destroyed by earthquake. It wasn’t even the Duomo at that time. It took on that dignified status when the Florentines destroyed the original Cathedral elsewhere in Volterra in their siege of 1472. It is no wonder this duomo is closed for renovation after surviving the last five and a half centuries intact. The photo on the right above is from 2004 when I first visited this church. The interior is lovely, particularly its beautiful ceiling.

Across the Piazza from the Cathedral is the Baptistry that is separate from the main church due to medieval sacramental theology emphasising the importance of Baptism in relation to the Eucharist that is the centre of the Church’s function. The most famous and beautiful example of this separation of church and baptistry is the incomparable duomo of Florence, Santa Maria del Fiore. Many of the middle age church’s in France have a similar separation of sections of their church buildings; the French like to keep their bell towers as a separate entity from the main body of the Church, I suspect mainly for architectural reasons as well as the fear of lightning strikes. The most significant feature of Volterra’s baptistry is the St. John the Baptist Sculpture, by Giovnni Antonio Cybei. 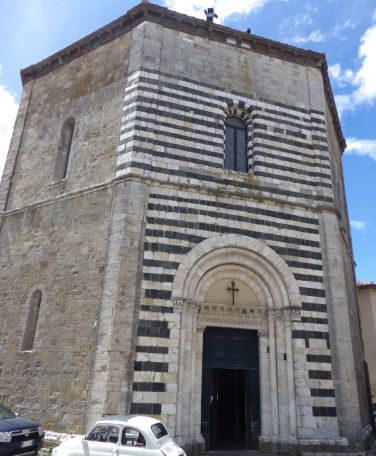 After we finished our inspection of the piazza of San Giovanni, it was that time of the afternoon for a long walk back down the hill to our car. Luckily, the direction of our return journey was via the most famous of Volterra’s gates, the Porta All’Arco (The ArchGate). The direction signs in the town called it the Etruscan Gate as it is the only city gate that has survived from when the Etruscans ruled in Volterra; in the case of this gate, two and half thousand years ago. The sign beside the gate gives us the following key details…

…The limestone comes from the neighbouring caves of Pignano. Three heads made from selagite…are placed respectively in the middle and on both sides of the arch, most likely symbolizing Zeus and his two sons, the Dioscuir (Castor and Pollux). The gate architecture reveals different phases of construction, with the sides probably dating back to the 5th-4th centuries B.C., while the vault seems to belong to more recent times, and the arch and heads to the Hellenistic period (3rd-2nd cent. B.C.)

On the external side of the gate there are the three ancient sculpted heads mentioned above, claiming they are of Zeus and his sons. One source commentating on these heads suggests that they are lion heads, another simply says that they are just ‘mysterious’. Whoever they represent, they have survived a couple of millennia keeping an eye out over the beautiful valleys below Volterra for friends and enemies alike.