Marc Chagall (1887-1985) and Pablo Picasso (1881-1973), apart from both being long-lived and famous modernist painters, had two other things in common. They both spent the second half of their long lives living in villages in the hinterland behind Nice, in France. The other is that their names will be forever associated with the city of Chicago through the two major artworks that can be visited in downtown Chicago. Chagall himself spent some time in Chicago and appeared to have become quite fond of the famous Mayor of Chicago, Richard Joseph Daley, (1902-1976).

The unnamed, 50 feet tall, 160 tons sculpture designed by Picasso was commissioned in 1963 by the architects of the Richard J.Daley Centre for the associated Daley Plaza. Daley was a Chicago citizen of Irish American background who was Mayor of Chicago from 1955 to his death in 1973. He is credited with ensuring that Chicago remained prosperous throughout his Mayoralty, while similar cities in the region declined (eg. Cleveland, Buffalo, Detroit). Despite his successes, his legacy was tarnished by his approach to the riots after the death of Martin Luther King as well as during the Democratic Convention of 1967. His directions to the Police at the time were considered to be extreme. His public announcements were occasionally confusing such as the following explanation.

When the architects approached Mayor Daley about asking Picasso to design a statue for the project, they explained that Picasso was the greatest artist in the world. Daley was immediately happy with their choice. The messenger took a $100,000 cheque with them but Picasso returned it saying the sculpture would be his gift to Chicago.

Our walk to view this famous Chicago landmark had a dual purpose. The Daley Plaza also houses the Christkindlmarket from November 15 to December 24th. We hoped to stroll the Christmas market as well as getting up close and personal with the Picasso. However we arrived early Sunday morning and the market was all closed up until 11am and so, while we could view sections of the structure over the top of the market stalls, it wasn’t as satisfying as being able  to admire the piece up close. The photo here shows the Daley Plaza on a quiet day. 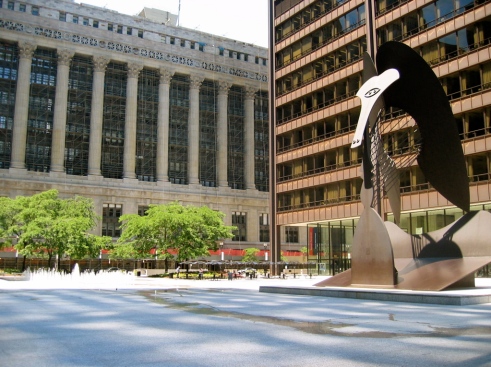 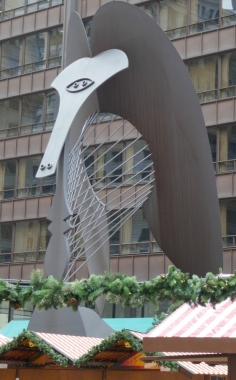 The statue itself has its supporters and critics amongst the Chicago community. A newspaper columnist, Mike Royko, who was at the unveiling of the Picasso in 1967, complained…“Interesting design, I’m sure. But the fact is, it has a long stupid face and looks like some giant insect that is about to eat a smaller, weaker insect. Its eyes are like the eyes of every slum owner who made a buck off the small and weak. And of every building inspector who took a wad from a slum owner to make it all possible.”

Unlike Picasso, Marc Chagall had spent some time in Chicago. He was here in 1946 when he lectured at the University of Chicago and his work was displayed at the Art Institute that we had visited the previous day. He returned again to lecture at the University in 1958. He returned in 1974 to be present for the dedication of the mosaic ‘The Four Seasons’ in the Exelon Plaza of the First National Bank of Chicago. It was this huge mosaic that we had come to see this morning in down town Chicago.

For serendipitous regions I have acquired over the years two prints of Chagall paintings so any opportunity to check his work out is something I can’t resist. I wasn’t disappointed as his usual surreal themes of floating lovers and donkeys were all there plus much more. The huge mosaic consists of thousands of ceramic chips in over 250 colours. The design for the mosaic was created in Chagall’s studio in France, transferred to full-scale panels and then installed in Dearborn St Chicago with the assistance of a skilled mosaicist. 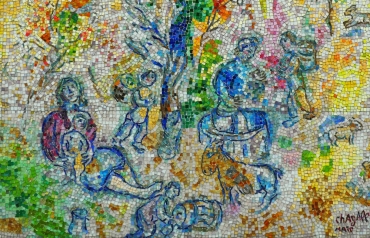 At the dedication of the Four Season’s mural, Mayor Daley attended and gave a speech of gratitude. He was quite surprised when the 90 year old Chagall gave him a kiss on the cheek for his kind words. 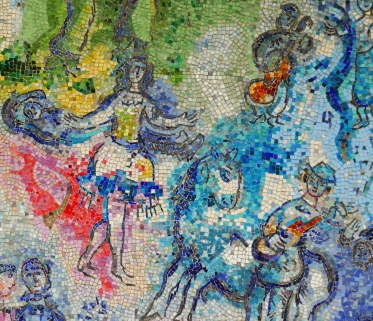 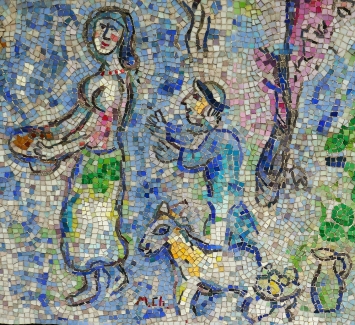