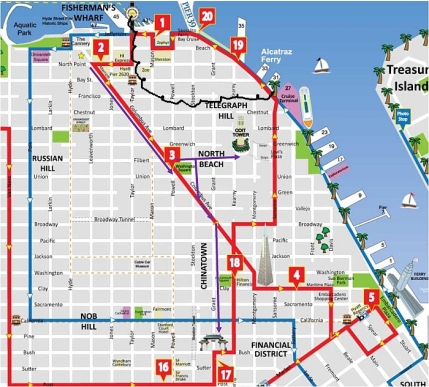 We travelled from Fisherman’s Wharf down Columbus Avenue by Red Bus with our first destination being Coit Tower. We were dropped off at the Washington Square bus stop in the centre of North Beach and this was when we realized we would be in for a great walk.

The first casual observation to be made about North Beach is that there is no beach; the ‘beach’ or the original shoreline has been pushed back to its current position by the long history of Gold Rushes, haphazard development and waves of immigration, particularly since the middle of the 19th century. The squiggly black line on the map here indicates approximately the original shoreline. Gold was discovered here in 1849 when the local population was around a few hundred people and two years later it was 25,000. One of the great historical ironies of San Francisco’s rapid development was that ex-convicts from Sydney (Sydney Ducks), banished there by English courts, decided to look for gold in California and terrorise the Barbary Coast section of the city as an afterthought. The photos of this area of the city below are from 1867, courtesy of ‘OPENSFHISTORY.org’. 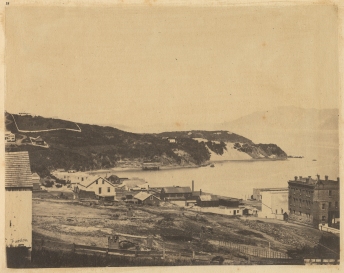 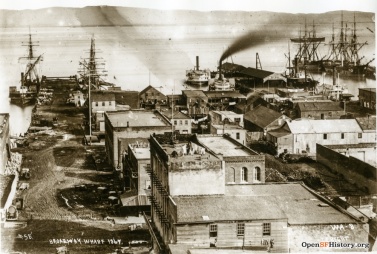 The Barbary Coast area was not only abused by the Sydney Ducks, all sorts of opportunistic criminals, corrupt politicians and brothel owners set up shop in the area and it took many years in the later half of the nineteenth century to bring reasonable governance to the area. Then the great fire of San Francisco arrived and destroyed all the buildings in the area. Everything had to be rebuilt for the twentieth century.

Starting our walk on the corner of Columbus Ave and Filbert Street, we walked over the road to Washington Square; there are at least five other Washington Squares in major cities of the USA. The Square is obviously the major green space of the area but much of it was closed for our visit as the irrigation system was being upgraded. However the groovy art work on the panels closing off the work area were almost as attractive as the park itself.

Over the road from Washington Square was the beautiful Church of St Peter & Paul. The first version of this Church was built in 1884 but was destroyed in the earthquake of 1906. The rebuild was completed in 1924 and in the next few years it 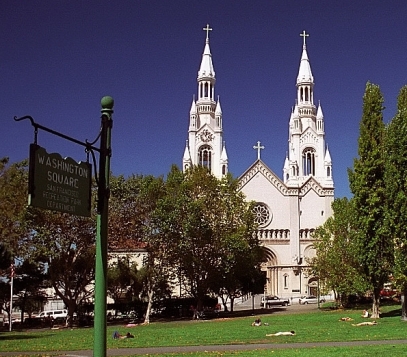 became a bombing target for anti-Catholic anarchists. This would have been a great group to infiltrate to try and discover why they were so specific in their anarchism against the Catholics, rather than spreading the love and hate wider by taking in the Protestant Churches and/or the Chinese Temples of North beach. Two such anarchists were eventually caught in the act and shot by the police, leaving no time for a theological grilling. 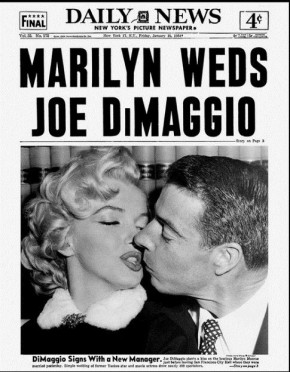 The church is so gorgeous it has been used in a significant number of movies (Dirty Harry, Sister Act 2, etc). There is a famous photo easily recognisable to Americans taken at this church in 1954 of a couple who had just got married in a nearby registry office. We Australians recognize Marilyn Monroe in the photo but not the guy who was probably more famous than her locally as well as in the rest of the United States. We Australians only heard about Joe DiMaggio from the mysterious reference in Simon and Garfunkel’s 1968 big hit, Mrs Robinson.

From the Church of St Peter & Paul it is a steep slow walk up Filbert Street to reach the top of Telegraph Hill and is a great test of knee fitness. Telegraph Hill has the best view out over San Francisco Bay so a two storey observation deck was built there in 1849 to watch for arriving ships and signal to the docks with Semaphore, the name of the ships soon to arrive. Technology changes fast so by the start of the twentieth century its role in ‘Telegraphy’ was long gone. 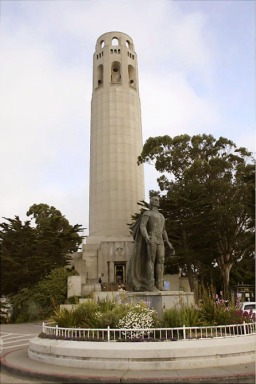 Coit Tower was built between 1932 and 1933 as a memorial to all the firefighters in San Francisco’s history, financed with money from the will of Lillie Coit…as a child she was a big fan of the local firefighters. The large park on top of Telegraph hill is called Pioneer Park so it is appropriate that there is an impressive statue of Christopher Columbus in the garden next to the tower. Visitors are able to catch the slow lift to the top of Coit Tower but before entering the lift, it is a good idea to have a look at the large number of murals in the circular 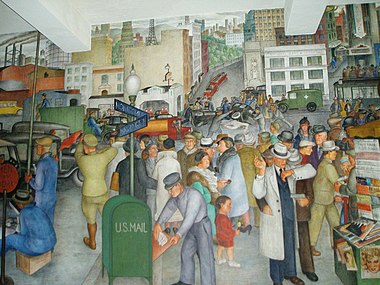 room at the base of the tower. The one on the right is of a busy street scene in Depression era San Francisco with a car crash and pick pocketing the features. The views from telegraph hill are worth the climb, particularly the one below looking down over Washington Square and the Church of St Peter & Paul to Russian Hill in the distance. My favourite movie link with Coit Tower is that Alfred Hitchcock, in his famous film Vertigo, deliberately ensured that Coit Tower could be seen out the window of Jimmy Stewart’s apartment, claiming it was a phallic symbol central to the plot. 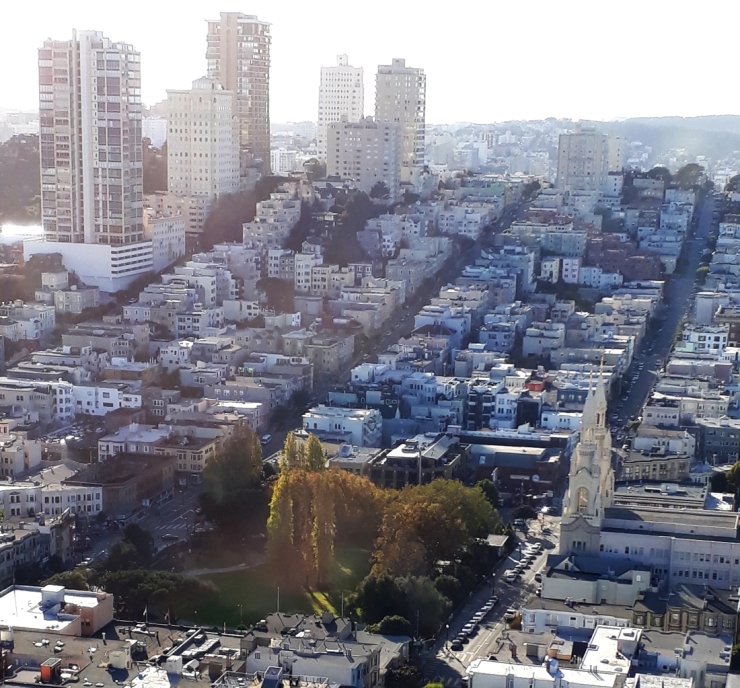 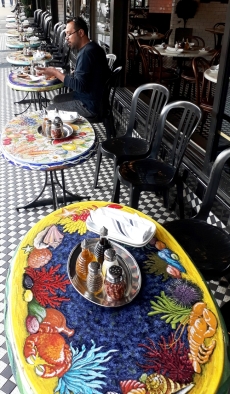 From Telegraph Hill, we walked

back down Dilbert Street. Turning left on Stockton street, we then reached the famous Columbus Avenue that led us towards the Transamerica Pyramid building that is like a lighthouse for the district. This is the heartland of San Francisco’s ‘Little Italy’ and all along the footpath were Italian restaurants begging us to go in and settle down for the rest of the afternoon. Unfortunately, it was too early for dinner so we headed past the Jazz Mural on the corner of Columbus and Broadway (see image on San Francisco Menu Page) and admired the famous City Lights Book Shop, the epicentre of the ‘Beat’ poets of the 1950’s & 1960’s 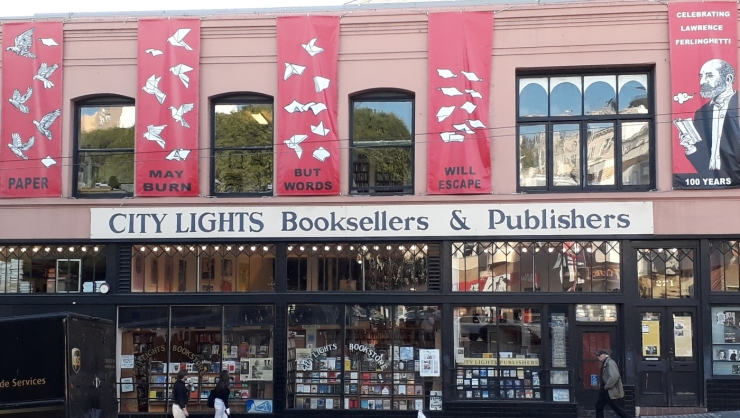 “Paper may burn but words will escape.”

The poster at the front of the shop announces that the owner and famous American poet and painter, Lawrence Ferlinghetti, is celebrating his 100 years in 2019. Earlier in the day we came across references to Ferlinghetti 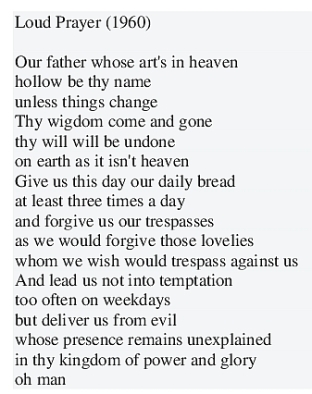 in the Haight/Ashbury district where he was remembered for being one of the guest speakers at the Human Be-in’ that started the Hippie movement that descended on that area of San Francisco in 1967. If asked if I had heard or seen much of Ferlinghetti previous to this trip, I would have said ‘no,’ apart from a vague recollection of his name as a poet. However I was wrong; in one of my favourite Music films, ‘The Last Waltz’ (1976), Ferlinghetti made a small cameo performance in the celebration of the life and music of ‘The Band’. He recited his poem ‘Loud Prayer’, presumably an expression of his frustration with the traditional beliefs of his local Italian Catholic heritage. As a declared anarchist himself, perhaps Ferlenghetti was a descendant voice of the anti-Catholic anarchists of his early childhood years who had bombed St Peter and St Paul Church. 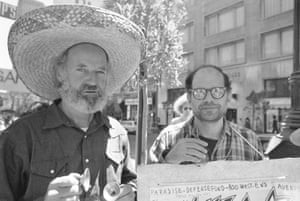 Ferlinghetti is also closely linked to the other ‘Beat’ poet he shared a stage with at Haight/Ashbury, Allen Ginsburg. He published Ginsberg’s poem ‘The Howl’ and both men and their colleagues were charged with obscenity (1957). The trial found them innocent and Ginsberg’s poem declared of ‘redeeming social importance’. The image on the right shows Ferlinghetti with Ginsberg in 1971 protesting over arrests in Brazil.

From Little Italy on Columbus Avenue, we crossed back to Stockton Street which would take us back down through the raucous beauty of China Town. Established in 1848, this area of San Francosco has a very colourful history, unsurprising as its ever-growing population of Chinese drew the envy and ire of Caucasian immigrants. 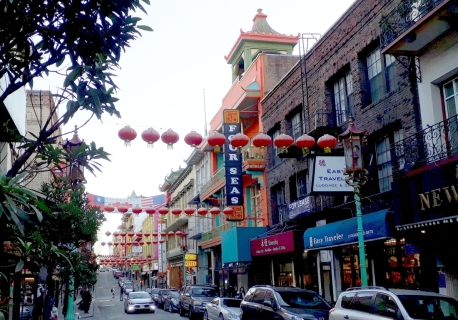 After being drawn to California by the gold rushes, the Chinese settled into becoming a welcome source of cheap labour in the city. The economic downturn in the 1870s saw civic relations change, leading to the two day riot of 1877 where four Chinese were killed and huge property damage occurred when unemployed workers believed Chinese workers were taking their jobs. Nearly thirty years later, Chinatown was burnt to the ground with large numbers of citizens dying in the blaze that followed the San Francisco earthquake. Chinatown’s colourful history continued on through the twentieth century with increased prosperity but associated problems of gang control and violence in the area becoming an issue. Today China Town is a booming area and has become a tourist attraction that draws more visitors than the Golden Gate bridge (according to Wikipedia). 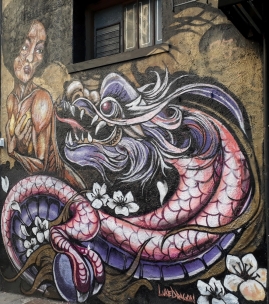 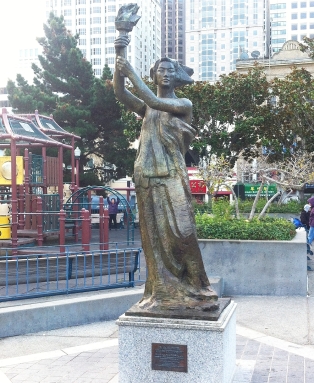 We continued our walk down Stockton St and took a left turn at Washington street to visit Portsmouth Square, the largest green space in Chinatown. Here is to be found a ‘replica’ of the Goddess of Democracy that was created during the Tiananmen Square student demonstration in 1989 when hope started to fade that reforms wouldn’t be achieved by the protests. It was destroyed by troops five days later, an action bound to cause further creative protests and so replicas like this one sprang up in other cities around the world.

From Portsmouth Square we headed down towards the financial district and Union Square and officially exited Chinatown on Bush Street through China Town’s official entrance, Dragon’s Gate. 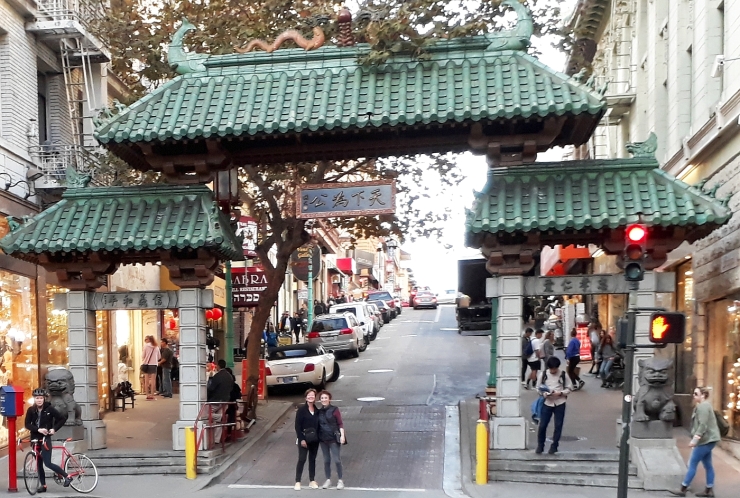