We had the opportunity to visit Washington in November of 2019. We caught the

train from New York and had approximately three days to see as much as possible of the Capitol of the USA. Our Hotel Darcy was near Scott Circle and it was a straight walk down 16th Street to the epicentre of Washington life, The White House. On the way down 16th street there was plenty of things to attract our attention but the one that I couldn’t help 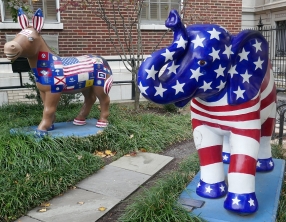 but stop and admire were the statues of the donkey and elephant in a building’s front garden; these obscure symbols of the two major American political groupings, the Republicans and Democrats, would not be overly familiar to foreign tourists. It is only that we encountered the donkey in Boston that these happy colourful figures made any sense to me.

The first clear view of the White House we encountered was across the park, Lafayette Plaza, with the impressive equestrian statue of Andrew Jackson (1767-1845) whose entry into politics brought the symbol of the donkey into American politics as part of his campaign.

We didn’t get much closer to the White House than the footpath of Pennsylvania Avenue, the other side of the road from the White House. There appeared to be a significant number of nervous looking security agents lined along this road defending the seat of Washington power from would be terrorists and the protesters that looked like they had set up a permanent refugee camp on their side of the road. 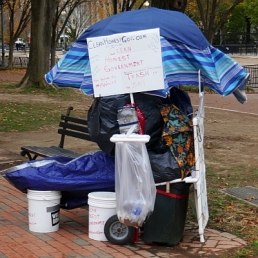 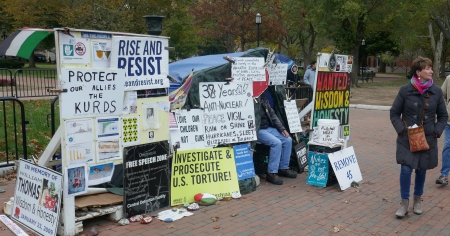 We walked to the end of Lafayette Park along the avenue and here was another impressive statue of an American Hero, the Marquis de Lafayette himself who commanded troops in the American war against the British. He returned to France from these adventures and was a significant figure in France’s revolutionary decades at the end of the 18th century.

Happy tourism of any world city is very dependent on the weather. Our opening touring day of Washington took a threatening turn as we 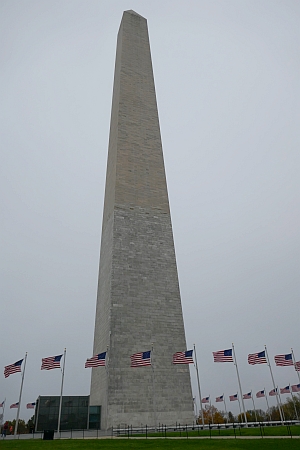 approached this monument. It is hard to be appreciative of an obelisk, its construction having started back before the Civil war, when the wind is blowing sleet directly into your face as you labour up the path to get a closer look at it at its marble and granite exterior. It’s even harder to appreciate such a monument up close when you are huddling out of the wind beside its exit door when the ‘Secret Police’ guy comes up and apologises for moving us on from the exit as it must be kept clear in case this stone pylon might catch fire. It was a harsh day in Washington that morning so we weren’t as appreciative as we should have been, given we were up close and personal to this famous landmark, celebrating George Washington, commander and chief of America’s revolutionary army and the first President of the USA.

Our next destination was the Lincoln Monument that we could see way down the hill on the other side of the long Reflecting Pool on which the sleety wind was starting to blow up a storm surge. However, our main task was to reduce the risk of hypothermia and get down to the bottom of the hill as quickly as possible.

We made it off the Washington Monument Hill when we realized we were not going to freeze to death. We had found that we were now in a little valley that seemed to be below the wind line and it now seemed possible to appreciate that we were now in memorial and monument central. The first major structure in our path was a World War 2 memorial and it was of significant dimensions and complexity. 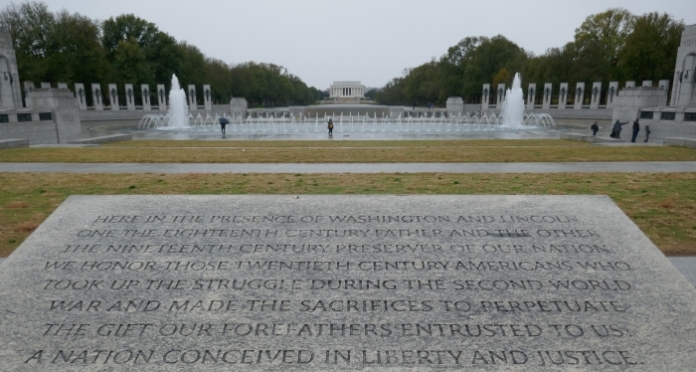 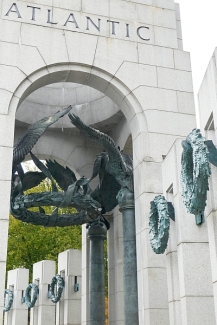 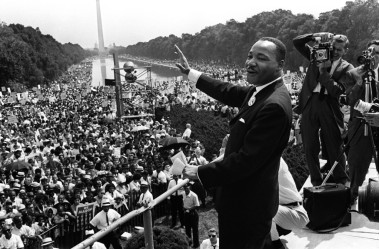 The memorial was opened in 2004 and seems to cover most aspects of the involvement of American troops and their allies in the theatres of war between 1941-45. This memorial was built with some opposition from those who thought it interrupted the sweeping view from the Washington Monument to the Lincoln Memorial. Others claimed that it took up the traditional space for demonstrations and protests in Washington. (Note photo of Martin Luther King speaking from the steps of the Lincoln Memorial.) Hmm…sacred memorials built to curb freedom of public protests; sounds like a cunning plan.

The Lincoln Memorial is built in the shape of a Greek Temple with Doric columns lining the front. It was dedicated in 1922 and holds a large and impressive statue of Abraham Lincoln and the walls hold inscriptions of two of his major speeches. There is a small museum downstairs in the Memorial with lots of photos of events that have occurred in and around the monument. 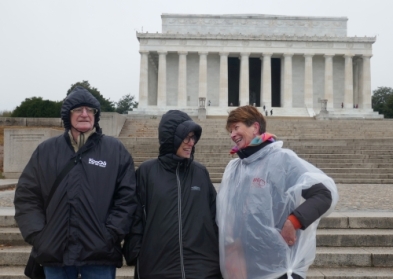 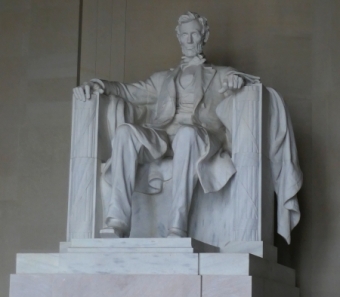 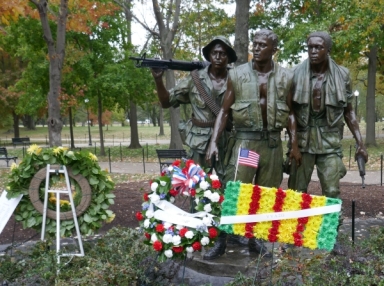 After finishing our inspection of the Lincoln Memorial, we exited and turned left to visit the Vietnam Veterans memorial. The Vietnam War was very divisive to American society, not just during the twenty years of conflict (1955-1975) but for years after. So it is not surprising that the building of the memorial was dogged by controversy up until its dedication in 1982. This is probably why my reaction to the layout of the memorial was a little confused when we visited. It is in fact made up of three separate memorials, the main one being the long black granite wall with the names of all the soldiers who had fallen, in whatever manner, during the war. 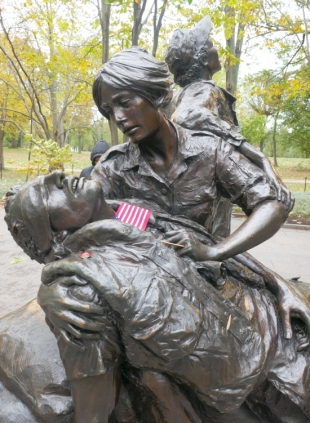 There are two other ‘sections’ of this memorial, the ‘Three Servicemen’ and the ‘Women’s Memorial’. The image above shows the three soldiers, depicted as a European American, an African American and a Hispanic American, all pondering on the memorial of all the soldiers lost in the Vietnam War. The third memorial is dedicated to the women who served in the war, mainly as nurses; the sculpture shows a nurse caring for a wounded soldier. This memorial was dedicated in 1993.

From the Vietnam War Memorial, we had to walk back towards the Lincoln Memorial and then take a turn and head towards the Korean War Veterans Memorial which occupied the mirror image site on the other side of the Reflecting Pool. The views in this area are stunning, particularly the one that goes all the way across the long pool, up past the Washington Monument to the dome of the Capitol Building in the distance at the other end of the National Mall. 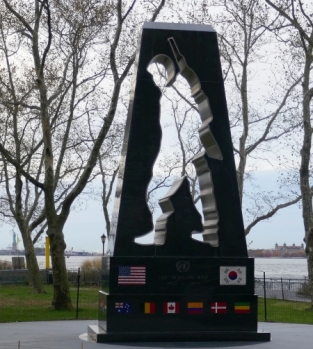 The image on the right is that of the Korean War memorial of the ‘Universal Soldier’ standing on the shoreline of Battery Park, New York with the Statue of Liberty and Ellis Island in the background. I had noted that this memorial had been careful to ensure that all nations participating in this event were acknowledged by a listing of the number of soldiers from each country who had died, were still missing or had been wounded. Similarly, the Korean War memorial in Washington ensured that all countries involved were acknowledged as participants in this war. The main difference between these two memorials was the inventiveness of the designer for b the Washington memorial who goes beyond the respectful naming of those who fied during this Asian War of the early 1950s. The artist captures the real world of danger and fear that soldiers found on their patrols in Korea. There are 19 stainless steel statues of over life-size soldiers in a platoon, nervously looking for safe paths through the battle field. Former President George H. W. Bush conducted the groundbreaking for the Memorial on June 14, 1992. 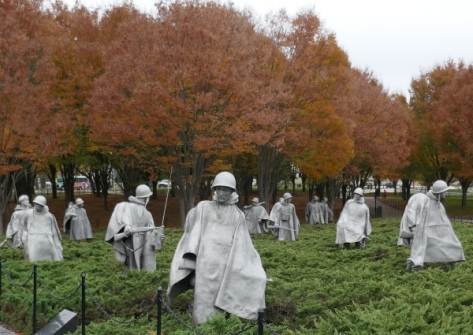 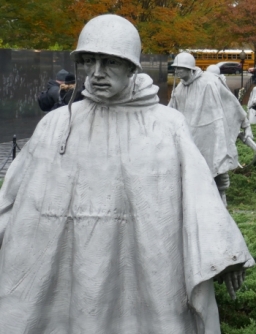 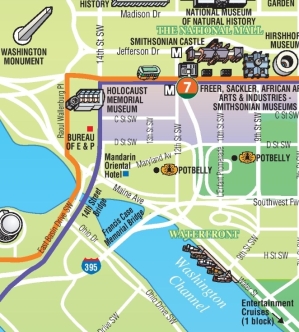 Having a drink the previous night in our hotel, we met some English tourists who recommended that we visit the ‘Waterfront’ if we were looking for good seafood in Washington. So to finish a long day of walking, we headed for the Washington Channel that wasn’t far down from the Washington Monument. Here we discovered a seafood lover’s paradise, ‘Chesapeake Bay’s Finest’, where there were a series of specialty shops selling both fresh and cooked seafood of all persuasions. There were also plenty of restaurants in the neighbourhood so we enjoyed a great meal before catching the train back to our hotel.

The main feature on one of the walls of the Lincoln memorial was an inscription of the Gettysburg Address, a speech made by Lincoln to soldiers who had survived the Battle of Gettysburg in 1863 when he was dedicating a cemetery there. Between 46000 and 51000 troops from both sides died in this battle. It is a very famous speech but its fame sometimes hides the great wisdom it imparts. I love the minor irony in the start of the sentence… “The world will little note, nor long remember what we say here…” 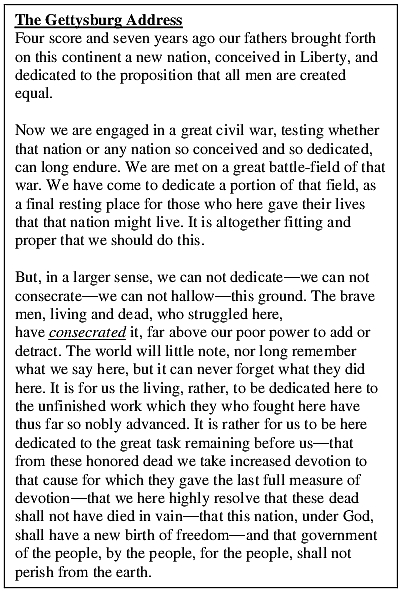