In November 2019 we were staying

in an apartment in Broad Street Lower Manhattan, just a short walk away from the World Trade Centre site. If a geographical location can be considered the centre of early 21st century history, then this is the spot. If our parents remembered where they were on the 22nd November 1963 when John Kennedy was assassinated, the baby

boomers and their children remember where they were when the twin towers came down after Al Qaeda ‘weaponised’ passenger planes to attack these symbols of Western power. One of the significant differences between 1963 and September 11, 2001 is the number killed; one US President in 1963 and nearly 3000 ordinary citizens in 2001. One fiduciary company lost 89 employees plus 7 contractors as their business was towards the top of the South Tower when the plane hit. There was no escape for them. The attack on the WTC towers has been the most pivotal event in the history of the first 20 years of this millennium, affecting all areas of the life for citizens of New York and the rest of the world.

As a tourist in New York there are so many interesting and exciting places to visit so if you are pushed for time, maybe the World Trade Centre site might not get on your list. However I suspect most people with strong memories of the events of 2001 would be keen to go and see what has happened to this area since it was devastated and demolished. One of the signs in the WTC Museum that has been built on the site of the twin towers makes the claim… “ Approximately two billion people, almost one third of the world’s population, are estimated to have witnessed these horrific events directly or via television…” The event itself

had such an impact on so many people that it is no wonder that if you don’t arrive early at the museum, the queues are extensive. We were here in 2011 and we visited the WTC site, but it was still largely a worksite with hoardings all around with viewing holes for visitors to get an insight into the frantic rebuilding that was going on at the time. When we returned in November of 2019, significant progress had been made in redeveloping the site with four of the six intended towers rebuilt and a large memorial complex based around the original two towers was in place. Where the World Trade center towers stood, there are two large pools with continuously recycling water flowing down the sides. The names of the people who died in the buildings are inscribed on the sides and, as in the image below, flowers are laid on their names when their birthdays occur each year.

In the WTC museum itself, one of the first displays you encounter is a whole series of photos of New Yorkers staring in horror at what they could see downtown and across the river at the World Trade Towers burning and collapsing. I remember being thousands of miles away in Brisbane Australia turning the television on over breakfast and watching in horror as the images of the burning towers filled the screen. It was hard to concentrate on work that day. These events basically triggered the international tension and military actions over the next 18 years and the consequences are still pivotal in world political relationships to this day. So why remind yourself of these incredibly sad events

again as a tourist? The World Trade Centre is a valley of tears to this day and experiencing the grief over again of the people of New York is a hard slog. The company, mentioned earlier, whose staff had the view from their old South tower window, had the view on the right painted for placement in their new workplace and the caption reads, “the Fiduciary Company wanted to connect its present with its past and place memory at the heart of its organisation.” At a time throughout the world where many countries are revisiting political philosophies that were prominent in Europe in the 1930s and 40’s, it appears that many people are ignoring the old dictum, “Those who forget their history are doomed to repeat it.” Keeping memory at the heart of our lives and our country’s political principles seems like a sensible idea.

The World Trade Center site is a very large area and consists of a lot of different buildings; a museum, monuments, parks and an underground shopping centre. The museum itself descends to the level of the foundations of the old WTC towers. The visitor gets to see remnants of the girders, that were preserved from the wreckage of the towers, that tell the stories of not just 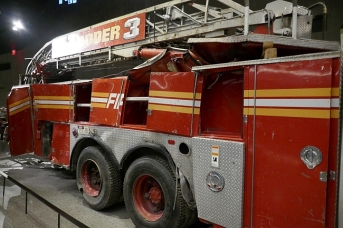 those who lost their lives in the building, but give an insight into what first responders encountered when they went to the assistance of the people trying to escape the area. Perhaps the most poignant displays was that of the fire engine belonging to FDNY Ladder Company from East Village which was parked on West Street near the towers while its crew went to the assistance of those trying to leave. It had to be dug out of the debris and is one of the memory pieces on display in this museum.

One of the other places worth visiting in the World Trading Centre area is Liberty Park that sits behind the area of the towers as the visitor heads down towards the Hudson River. For example, one of the symbols of the destruction of the twin towers that we encountered in 2011 was ‘The Sphere’ which was recovered from the rubble of WTC following the September 11 2001 attack. It was set up in battery park where we inspected it in 2011 after it had been erected there temporarily as a significant memorial. (See image below on left; note the snow!) It has now been moved back to Liberty Park overlooking its original location. 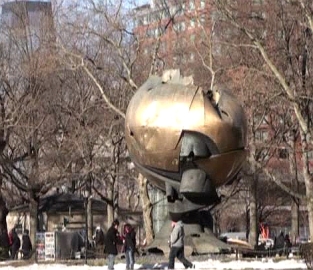 Not far away from the battered ‘Sphere’ is a 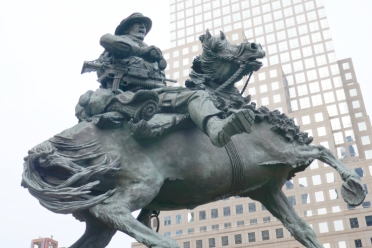 monument to all the Special Operations Forces that were sent into Afghanistan as one of the American Government’s responses to the attack on the twin towers. Their job was to drive the Taliban from power in that country. The monument is called the ‘America’s Response Monument’.

Whether you agree or not with America’s foreign policies over the last 19 years, a visit to the World Trade Centre site is not just about the politics and ideologies that caused the event. For me it seemed to be centred on the intense suffering that was visited on individual citizens of New York, no matter their nationality or religion, with such extraordinary cruelty out of a clear sky on an ordinary day. Nearly three thousand people lost their lives but the consequences for their families, loved ones and friends was multiplied by a number-factor that cannot be calculated. So many NYC citizens live with the memories of close relatives and friends whose productive lives were cut short and their life story ended without the chance of so much potential being fulfilled. A visit to the World Trade centre, particularly if you visit the Statue of Liberty around the same time, is a great recipe for encouraging visitors to strive in their own communities for the human rights set out in the second sentence of America’s Declaration of Independence.

We hold these truths to be self-evident, that all men are created equal, that they are endowed by their Creator with certain unalienable Rights, that among these are Life, Liberty and the pursuit of Happiness.

APPENDIX 1…When all else is lost, create great Art!

Here are two examples of 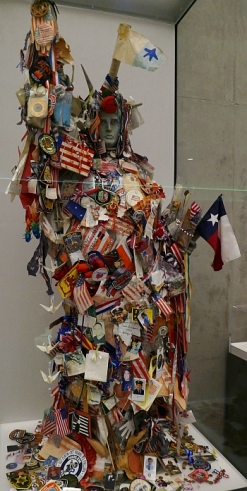 community involved art that sprang up around the ruins of the World Trade Centre and are now preserved in the WTC Museum.

The one on the left is entitled ‘Renaissance Peace Angel’ and was constructed from decommissioned/melted weapons. It was set up outside a restaurant in Lower Manhattan and it became a landmark for Ground Zero workers and volunteers, many of whom signed the base.

The other piece is a replica of the Statue of Liberty that appeared outside the firehouse of 54/Ladder 4/Battalion 9 who had lost 15 men at the World Trade Centre. Not long after its arrival, flowers, images, tributes and notes began appearing on or around the statue. Neighbours took responsibility for arranging these offerings. 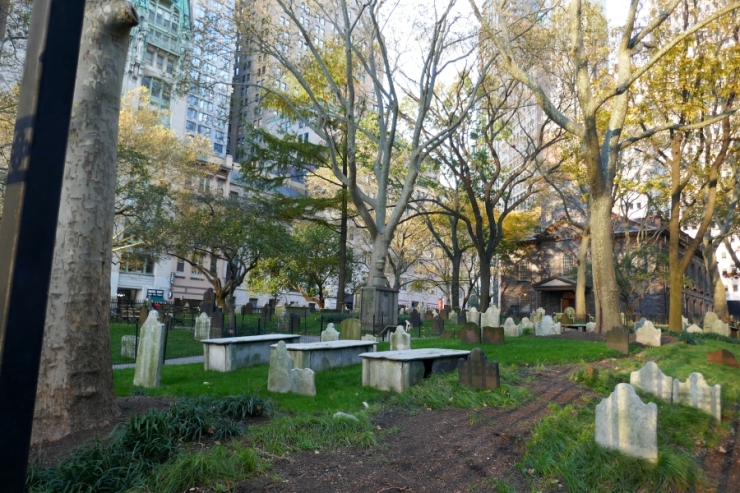 is the oldest surviving church building in Manhattan. It is situated just over the road towards Broadway from the World Trade Centre site. During the attacks on the twin towers, it was amazing that not even a window was broken in this church. As one of the few nearby open spaces, the Church Yard and its graveyard became a place where rescue and recovery workers went to rest at the end of their shifts.